Short:  I installed my replacement motherboard, GPU, and SSD.  I reinstalled windows onto the SSD along with all the drivers, and I've experienced two BSODs when I shut down windows and it goes and installs your typical windows updates.  I experienced another one today when I left my computer uploading a YouTube video(YouTube video was uploaded successfully).  No overclocking has been done yet.  Not even Intel Turbo boost.

Long:  I had my computer without a GPU and SSD, and it worked just fine.  I RMAd my board because of WiFi issues and a faulty front audio header.  I also bought a GPU and SSD so I could give my computer a nice upgrade.  When my motherboard came in, I reinstalled everything(including the CPU), along with my GPU.  I then formatted my mechanical drive, and did a clean windows 7 install on my SSD.  Installed all the drivers, and my GPU and CPU temps look just fine.  I got two BSODs halfway when my computer was shutting down doing it's windows updates.  Today, I was doing some browsing, and was uploading a YouTube video.  I left my computer for an hour or so, and then when I returned I saw a nice BSOD.  It looks like the picture underneath, but it doesn't look like the BSODs that happened during my windows updates. 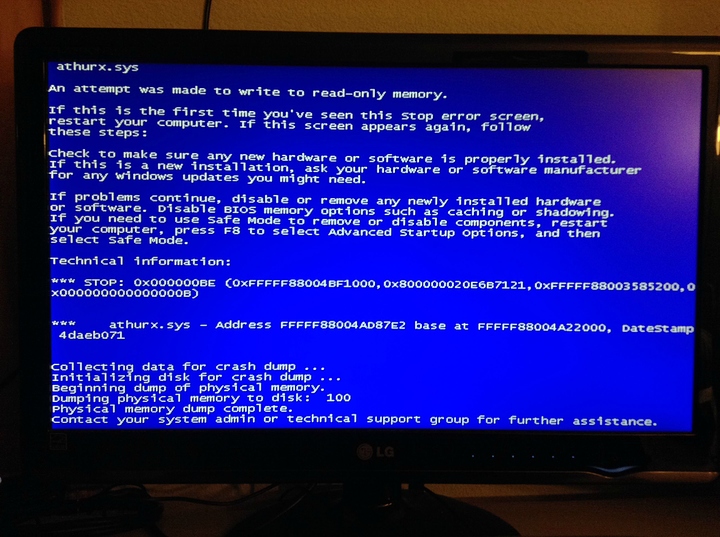 Any ideas on how to stop my computer from BSODing?

ummm, I think it's because you have an atheros wifi driver installed, when you have realtek NIC's

just to be safe, upload the .dmp files from c:/windows/minidump

so I can run an analysis.

Also, while you wait on Commissar to check over those files, you can run Memtest in the meantime.  A faulty RAM stick could be the culprit.  This sounds more like a driver issue though, since everything seems to have been working before the motherboard, GPU, and SSD replacement.

i looked up the driver listed right on the image, and it's an atheros wifi driver.... and his mobo has realtek for wired and wireless...

Yup, that's bound to cause problems.  It still can't hurt to test the memory as well.

I am using a USB wireless card because MSI didn't send me my antenna for my motherboard.

The USB wireless card is a TP-Link TL-WN722N

I've used this RAM since August of 2013.  Been working just fine, but I do have memtest somewhere.

yep. as I thought. it's tha atheros drivers. take the antenna off, ans stick it on ur mobo wifi.

Well for one, I don't have the WiFi antenna for my motherboard.  As a result, I'm using a USB WLan adapter.  The antenna connection on the motherboard is different from my USB adapter's antenna. (MoBo has mmcx I think)

I'm scrollin down my "Add or Remove Programs" and I can't find anything starting with Atheros.  The only WLan driver I see is TL-WN721N/TL-WN722N Driver.