I can't be the only person here who loves Linux's persnickety, bookish older cousin. Discuss why you like BSD, What you're Using BSD on, Projects You'd like to do with BSD, BSD related content, and the like. (and try to keep the copyleft vs permissive flaming to a minimum)

Curious about BSD? Thirsty for BSD related content? Maybe give these guys a gander:

Currently I've got an old core duo macbook 1,1 running OpenBSD, A NAS and backup server running Freebsd, a PFsense router, entirely too many things that don't necessarily need it running on netbsd, and a website, mailserver, and desktop chugging along on versions of TrueOS.

Only BSD system I have at the moment is my pfSense router, I tried BSD on the desktop years ago for the lulz but not for very long, I may give it another look, I know @Adobe_Flash_Player is running BSD on a Raspberry Pi so I may give that a try.

Desktop isn't the strongest use case for it, but if you do, stick to OpenBSD or TrueOS. I love it for any type of web facing appliance or home network fixture though. netbsd is great for embedded dev, too. I've installed it on a bunch of "IoT" devices that supposedly need third party callbacks to function.

You gonna try to install actual BSD on it?

haha this is not the tread for you then, my friend. 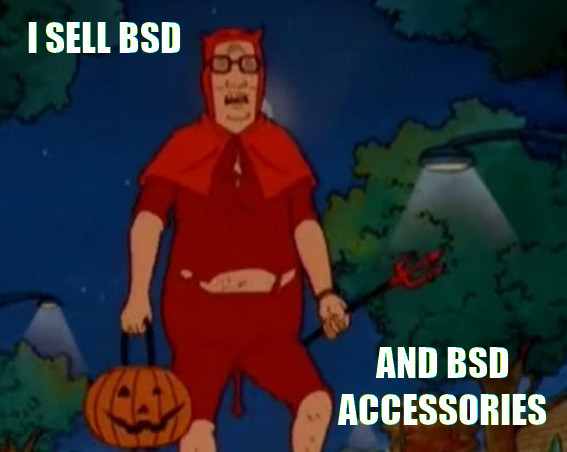 I have rasbsd on a pi that I use as an ssh box. Also have pfsense for my firewall.

Run a VPS with freebsd 11 and have a VM with bsd 12 on it because of testing and curiosity.

My whole setup runs on a mix of Freebsd and Debian.

I appreciate it for my pfsense box :P and isn't the PS4/3 OS forks of BSD, also?

Yes indeedy, they run Orbis OS, a heavily modified spin of FreeBSD. Most recent console I own is a ps3, but I forgot to include it on my list

This guy knows what's up

Funnily enough, I've never owned an OSX machine that was new enough to be apple-supported. It'd be a lot cooler if you could install it with proper best-effort support on whatever you wanted.

Apples Mac OS is open source. There was ( or is ) the puredarwin project ( I think that's he name ) where you can get the OS. You do not get out of the box the propriety stuff. I tried to install it once back in the day before I realized that you needed Mac compatible hardware. It failed, because it could not find the cpu cores, which I thought was a strange error.

Other then that, my only bsd experience was freebsd, which was a great experience.

There's so much prop stuff it depends on, that it will probably never run ootb on anything but macs, which kinda defeats the purpose.

Freebsd is so damn good, it's like centos or debian, if their maintainers never made a wrong or inefficient design decision.

To Hackintosh a Macintosh: Mac Pro 1,1 with El Capitan Blog

This is a series. When I do others I will post them all towards each other at the bottom of the first post. So earlier I posted this image. [image] I managed to get El Capitan on my mac pro 1,1. Not TOO difficult but the major problem is going to be getting some of the things you need... Them being: Mac Pro (1,1 or 2,1) 8GB USB or bigger 16 GB of RAM Dual Processors (I am personally recommending this but its not a real requirement) A Hard Drive (duh) The 1,1 to 2,1 firmware updater ( https://mega.nz/#!6AcSiIAR my personal mega ) Piker USB tool ( http://forums.macrumors.com/attachments/pikify3-1-v12-zip.661799/ ) El Capitan .app in your applications folder You need at least 12 GB of ram to make the installer USB. I recommend 16 as, well, why not? You should update your mac pro 1,1 to the 2,1 firmware before the install just in case. The tool itself has the instructions on how to use it. So the basic process is 1. Format your 8GB or bigger USB to HFS Extended 2. Put you El Capitan.APP in your applications folder on your mac 3. Open up Pike's tool (I used V12) and open terminal 4. do ./pikecreatebootusb (or whatever the name of the exact script is in the file) /Volume/(yourusbvolumename). You can find this in disk utility. 5. Boot into the usb. In the folder with the toolkit are some EFI files. These are modified files to make OSX boot on your mac pro 1,1. One has the new design that is a white bg and a black logo, and the other one is the older gray bg gray logo which I like more. The default is gray. You can copy it over if you really want or just ignore it. Its an aesthetic that will matter for all of 20 seconds. Now install El Capitan. My personal machine is: Mac Pro 1,1 with 2,1 firmware 16 GB FB-Dimm ram 1tb HDD + 250gb HDD + 64 GB SSD 2 x cd drives XFX R7 370 (El Capitan has drivers built in for the card) An airport card not intended for this machine but works anyways 2 x 2.66 ghz xeon 5150 (soon to be x5355's when I have throw…

Just because they aren't supported doesn't really mean anything.

It does if your time and spare/daily-driver hardware is at a premium.

I use TrueOS everyday for work. Also worked on some FreeNAS stuff. Use OS X at home and of course iOS. Also attended some BSD conferences. It has a really interesting history.

I've yet to try from the ground up a vanilla FreeBSD install. That will be my next project