Break me of my debian based ways

Not VM. Container.
You can have any distro running on the same kernel as the host, so there's no drop in performance.
I used to fire up either Arch, or just shortcut applications that, when clicked on, would fire up Arch in the background and open up in Fedora (still running inside Arch, but if you couldn't tell the difference if it was running on the host or in the container).
Quite handy when you want to install some obscure or untrusted software, and instead of searching for some repos or compiling it yourself you'd just (in Fedora) open a terminal and type in 'pacaur -S randomapp' (and maybe create a shortcut) and be done with it.
I've mentioned it multiple times that containers are awesome, but I feel like I have to make a video about it for people to realize actually how it makes life so much easier. 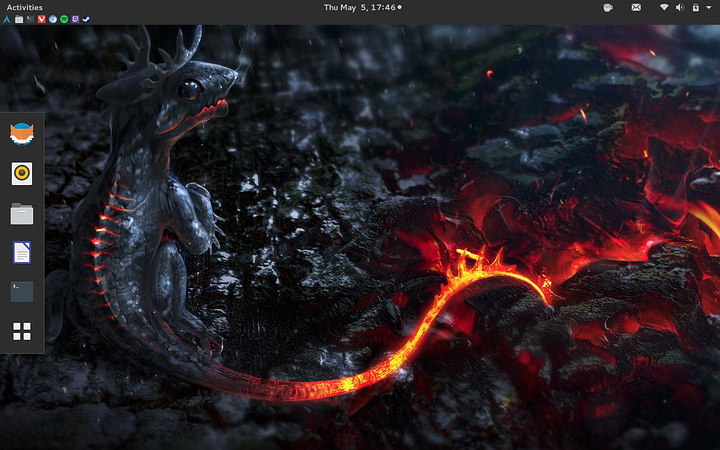 Old screenshot of when I had a panel dedicated Arch stuff in Fedora.

Honestly, you may as well ask, "What is the best model and size shoe for me?"

I think the biggest mistake that most folks make is thinking that they can somehow choose their ideal distro, without actually taking any of them for a test drive. How can you decide if you like A more than B, if you've never used B ... or A for that matter. What would be the down side of dropping a new ISO on your flash drive once a week and booting the live image? It will only take 3-4 minutes to decide if you hate it, or not.

Since the biggest difference between distros typically tends to be the desktop environment, you can install multiple new DE's on your current installation. You can then select a different DE one at each boot! There are also no shortage of YouTube distro reviews to watch, which will also help you to choose an ISO for your flash drive.

choose their ideal distro, without actually taking any of them for a test drive.

You can then select a different DE one at each boot!

I know this. I'm trying to learn more about working under the hood. thats like saying "if you want to learn how a chevy drives, paint your honda with chevy paint". The fact is, I so rarely interact with a linux DE these days that I dont care for one or the other. My ubuntu machine is headless.

There are also no shortage of YouTube distro reviews to watch

Which is why im asking the community what they think instead of digging through a bunch of garbage on youtube.

It's the journey, not the destination. Just jump in, grab an ISO and do it.

What do you intend to use it for? SELinux can be a real pain for many web applications and some server software. There's quite a bit of work in writing SELinux policy. As @Eden states fedora is on the edge but historically it's also been on the bleeding one and it's a bit more experimental than some other distros so it's worth keeping that in mind.

Fedora is not a bad choice but it might depend a bit on what you want to use it for.

I bounce between Ubuntu based and Fedora/CentOS/RHEL depending on which machine I'm on. At home I use Ubuntu on most machines. It was my first distro, still is in LTS, why not use it?

For work I'm on "RPM" systems. Be advised Fedora has quick release cycles and you'll have to update. Which can break things. CentOS is nice, most packages are older and I've been limited on the repos before, but it's server software in reality.

OpenSUSE has never worked for me, but that may be a layer 8 problem.

Fedora and GNOME 3 suit me at my job well. I have faster workflow on Fedora/GNOME 3 than on Ubuntu/Unity.

Every distro does something's awesome and is weaker than others in areas. I guess try to match what you want to do with the machine to the distro.

Check it out -
Do you want a badass workstation - consider Fedora
Do you want to have a "PC Desktop" and want to be able to watch YouTube - stick to Ubuntu.
Headless server -try a minimal install of CentOS
Want to learn about the under-pinnings of a distro, give arch a shot.

Well if the Debian way works for you, then plain Debian is allways pretty sollid.
Maybe the new Debian stretch 9 might be worth a look.

I think that @Eden has some good and vallid points.
If you wantto go further into Linux professionally, and you want to get away from the Debian base.
Then Fedora or Open Suse are definitelly some of the better choices wenn it comes to professional use.
Open Suse in particular with live kernel patching is one of the better distributions to use on servers for example.
On which Fedora and Debian are really nice distribution for workstations.
But also Open Suse and Fedora have their main goals set on professionality and security.

Debian Stretch is great. I have it installed on my laptop, desktop, and server. I used to use Arch on my desktop, but over time I started to hate pacman. Debian testing has new packages just like Arch, and it has not broken on me like arch did a couple of times.

I had trisquel on my laptop before, but it had older packages, so now I use Debian with nonfree repos disabled.

Opensuse tumbleweed all the way.

If a stable point release model is more your thing, then fedora is an awesome distro too.

Not VM. Container.
You can have any distro running on the same kernel as the host, so there's no drop in performance.
Quite handy when you want to install some obscure or untrusted software
I've mentioned it multiple times that containers are awesome, but I feel like I have to make a video about it for people to realize actually how it makes life so much easier

@Baz is this like sandbox or Docker ? Arch in a Flatpak???? What wizardry are you doing?

Check out bootstrapping and maybe systemd-nspawn (cuz it's simple)

Thanks ! Will do. I'm sure to ask questions, so hope you are around for it

Feel free. Might not just be around all the time as I can't use my phone at work but I'll check in now and then

If you're trying to pick something else which will be useful to know in the server space professionally I recommend going for something that's RHEL-based (or just RHEL). I keep hearing about Fedora but I'm not sure how many prospective employers actually use it. Since I work for a Saas company and do deployments on customer systems I get to see a lot of the stacks being used by other companies in the states - I mainly see RHEL in the enterprise (I haven't seen Fedora or CentOS at all). I'm not sure what your use case is, but it sounds like you're looking for a Linux distro to run web servers - not something for the desktop.