Bought the PHILIPS BDM4065UC/00 - Can return it until tuesday - Need some tests!

Since it's pretty hard for me to get my hands on korean displays from Germany, I tried out the Philips. It was kinda difficult for me setting up all the scaling etc. but now I am pretty much good to go. The display is from my point of view great, but I only have it for a few hours and haven't be gaming or anything yet, since I have troubles playing my main game (League of Legends) in 4K and had to reinstall it now.

So basically, I know the display has a bad reputation. Could you provide me with some tests so I can see what the weak spots are? Cause I am bad at this and maybe won't notice anything, if you guys don't help me out. Like I mentioned in the title, I can return the display without troubles until tuesday. Until then, I would love to run different tests, compare videos on 2K with 4K... etc.

Thank you in advance!
Aqua

Seems to have decent reviews 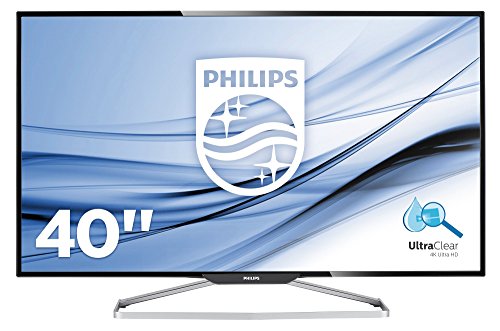 The Philips Brilliance BDM4065UC is a 40-inch 4K monitor. Can this desk-destroyer topple its rivals?

I have a GTX 770, currently connected to 3 monitors, 2 23" and one 40" (Philipps). I just totally broke League. Did even unistall the entire game & downloaded it again... have to message their support & wait for some days -.-'

Well in the mean time we should bump you up to some dota, right 770, I remember now.

Here's an older 285 doing some of the multiplayer games at 4k, even like a 380/x could probably do it

What do you mean you broke it? If worst comes to worst just reinstall windows

Thx, but I will stick to my rig for now. Just built it less than a year ago. I was just looking for some tests I could run with the Philips to ensure his quality is decent.

This is how my League of Legends looks like, all those random numbers. Repaired it. Reinstalled it. Dunno what to do. I contacted the Support. Hopefully they know how to fix it.

if text on the display looks good, you could run a monitor display test thing

Okay! Nice, ty :) Maybe I can borrow the camera of a friend. But many report color bleeding, flickering, edge shadow... etc. how do I test those?

A color test? It'll run through a number of colors, just use something from the above, or download one of the free monitor color testers

Okay, I ran several tests to may help someone wether to buy this monitor or not. I have to say, I am quite pleased with this monitor. The only thing that is kinda weird, that sometimes it's slow when I am moving windows from left to right or open things.. but I think that is propably GPU related, since I am running 3 monitors which of one is 40" 4K. By the way, I also did the Windows thing, where u adjust your contrast... etc. and now my League of Legends client looks way sharper than before. I am actually quite pleased with everything. But I have to check Netflix to see if I can really tell the difference between 2K and 4K. I can just watch a movie, pause, turn 4K off (under settings, the "high" resolution) and continue to see the difference, right? Or do I have to rebuffed/reload it, when switching modes? By the way I fixed my League of Legends client, it was because I scaled everything too high within Windows (you can scale everything from 100%-350%. It was on 350%, now it is on 100% and looks perfect.

For 707$ with two years of guarantee from the biggest electronic store in Germany and being it from Philips with 3ms reaction time, I am actually quite pleased. Had zero problems ingame yet (only playing League of Legends).

I hope this well help anyone, if you want me to perform any tests, I would be glad to help you out :)

Hey! I just bought this monitor too, and I LOVE the really deep blacks and high contrast, but I don't currently have a GPU that supports the full 4k at 60hz. Can you run yours at 30 hz for a few minutes and then switch to 60 and see how much different it is? > my mouse accuracy has gone to shit and I need to know if this is lag from the monitor, or if the problem is the 30hz refresh rate.

I also did notice some color bleed if you are displaying some bright colors on a black background. Kinda annoying but I think I can live with it 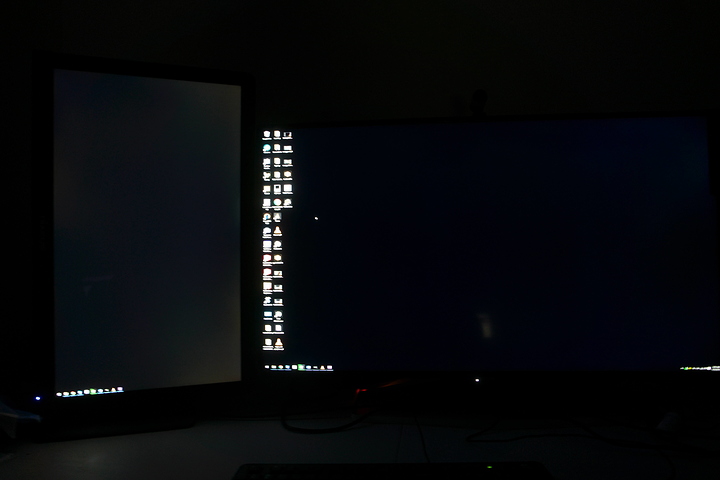 Here you can see what it looks like in use right now. The left monitor is a Nixeus VUE27D which I believe is a B grade panel like the original 1440P monitors that Logan looked at. 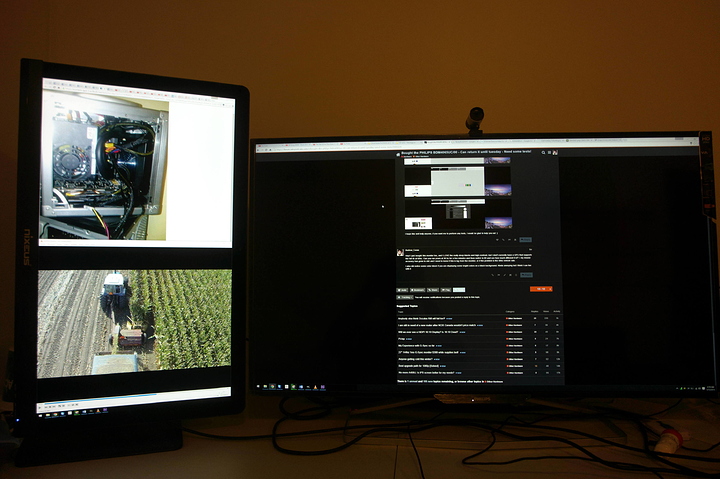 Btw, screenshots of the tests don't show anyone much :p

Okay, I am sorry if the screenshots are of no use. Sadly, I did already return the monitor since I decided to buy a TV (talking about it in another thread). I can tell you however, that many in this forum have been asking if this or that monitor is running at [email protected] because it's really important for them. So I can only guess that [email protected] is kinda bad and would cause your lagg. Like I mentioned somewhere above, I also had some laggs using Windows, moving windows from A to B... etc. but I thought it was because of my GPU. Ingame tho (only playing League of Legends) I didn't experience any laggs and was quite satisfied with that. So if you are running it in 30Hz, which is half, I would assume the laggs are because of that. Having said that, why would you buy a 40" 4K monitor if your GPU doesn't support 60Hz at all? Isn't that the point? I mean otherwise you can just buy a 40" 4K TV and run it at 30Hz, which would propably cost you half of the monitor.

That piece of shit rig is exactly why I am not subscribed to linus. Whats the point of making a 4k build that will game in 4k for not even half a year if that. He over paid on the case, Has a shit psu and a cpu that will be a bottle neck by the end of this year. Meanwhile once the new architecture from nvidia comes out my intel core i5 4570 rig I built a month before his will be saying good bye to its 760 and gaming in 4k and maxing everything . That rig was a piece of utter shit.

I know Logan has also been saying shoot for highest end gpu but just don't the cpu will last you longer make that a 1 time investment. The gpu is always shorter term a 2500k can still max any game while a gpu from that era can't. CPU should be what the budget gamer shoots for with progressive graphics upgrade you won't be gaming on 4k for that first year of having that rig but 2 years down the line when you upgrade your graphics card it will be worth it. My intel core 2 quad rig lasted me from 2008-2011 before the cpu became a bottle neck and was maxing games with timed gpu upgrades. Spending more on the cpu will hurt you at first but in the long run you get better graphics after you get your next graphics card or you leave enough cpu power for sli.

Hey ! If it behaves good and gives great display performance..and nothing jumps at your eyes............DO NOT LOOK FOR BUGS, THEY WILL FIND YOU.
Maybe you have a good copy.GREAT ! and enjoy ! :-)

Hello there, I'm using this display since last June, and I like it a lot. It has a separate topic for its own, look it up. IMHO this is the best review on the web right now:

I calibrated my display by these instructions, I'm happy with the results.

It's a bang for the buck, it has awesome contrast, deep blacks and surprisingly good response time. It likes to ghost (when moving black stuff on white background), i found a dead pixel 1 month after buying (i don't notice it unless i look for it hard, so i basically don't care), the panel is not 100% uniform, even smart uniformity turned on (which is highly recommended btw). Corners are a bit darker, it turnes on after sleep mode quite slow and the dp1.2 cable is too short, I had to buy a longer one. And of course, no adjustment. But still, if someone is looking for a stunning looking display, I can recommend this one, no monitor is perfect and you have to compare the performance to the price. I use it for gaming, watching movies/series and work (photoshop, rendering, CAD), and I'm happy with it, despite the flaws.

He probably just had most of those parts just lying around though, and was sent the other one by AMD I guess

Well boys, may want to keep the Philips now that the Korean monitors have been so very inflated in price.

Just discovered this review from good old Tom's Hardware, reading is recommended :) The results are quite convincing, together with the charts at tftcentral.

The monitor was 500$ off. It was a deal I couldn't pass up. 800 Canadian shillings for a 40" 4K monitor is great, especially since the value of our currency is falling with the price of oil. I for one am thrilled to death with the quality of this monitor, and would have to pay around 1700$ to get an equivalent TV. I have put my face 2" away and not noticed any colour bleed.

HOWEVER, out of the box the colour settings were atrocious. Waaaaay to blue. I calibrated it and now it looks great.

I agree with you it looks phenomenal. the blacks are so black that if I fullscreen an entirely black image I can barely even tell that its on.