My laptop (i5), Ubuntu Groovy installed. I have the latest driver version (455) installed. I tried both the on-demand and the NVIDIA PRIME profiles (I first used on-demand, but then I tried NVIDIA just in case that the two environment variables were not enough to entirely point Blender towards the dGPU), but still nothing. Any and all help is appreciated!

Which Kernel are you running?

The latest nvidia driver is currently not compatible with Kernel 5.9:

NVIDIA Driver not yet supported for Linux Kernel 5.9+

I’m currently running in the NVIDIA (Performance) PRIME profile by the way: 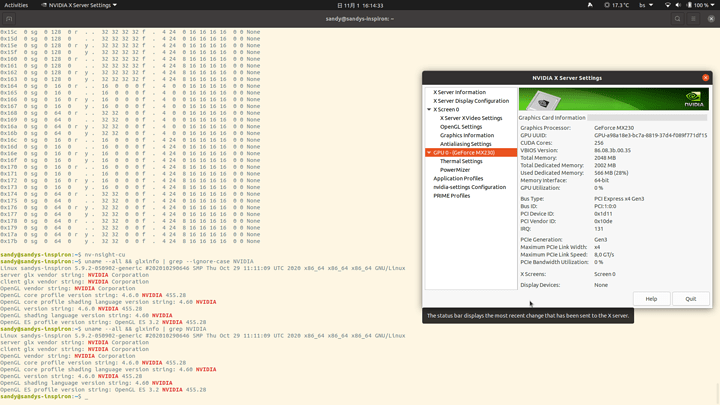 From what I understand, the kernel modules should not have been compiled, but they were. They were not able to compile back when I was on 5.9.0 though.

Booting with Ubuntu’s 5.8 kernel made it work and I’m now left wondering how the OpenGL driver works on 5.9. Also, the Intel iGPU is detected as a CUDA device for some reason and neither are detected as OpenCL devices.

I really didn’t think that it was necessary to boot with an older kernel because the OpenGL driver worked. The NVIDIA X server settings even showed the CUDA core count on 5.9!

There was an article on phoronix explaining the issue I think.
They changed something in the Kernel so the driver can’t access the compute units for some reason. The driver still loads and shows everything, and graphics work fine, but the CUDA cores are not accessible. The same for NVENC since that is partly handled by the CUDA cores.

Are you referring to the GPL-only symbols? Yeah, things were made stricter to ward off GPL shims. I though that that affected all of the drivers though. Go figure…

Well both AMD and Intel are using open source driver so it doesn’t affect them. Nvidia is the only proprietary driver where it is immediately noticeable.
There are probably a lot of other drivers affected, but not quite as common.

For the record, I mostly just coast on the Intel profile because of the situation with NVIDIA and Wayland, so I’m kind of clueless about things half a year later (I got this laptop in April and my previous one was a 2016 AMD dual-core one).

I was referring to all of NVIDIA’s drivers, not all in general. What I mean by that is that I did not expect for the graphics to work for example.

Oh, yeah, no idea how that works TBH… I never really looked at the nvidia driver stack because I never needed or cared to.