I was trying to get Network Rendering going on my home network, because I have 3 other computers, besides my main workstation that I can tap into. However whenever I try to do Network Render, I end up with nothing but black frames.

I’m currently just doing a standard Cycles render now, just on the Workstation, and it’s fine. Nothing seems to be wrong with the scene or anything.

I’ll try to include as much info as I can that I think might be relevant.

I didn’t have any problems setting up the communications between all the computers. The Master/Client/Slave relationship was all working. I had all my computers working on frames, but they all came out black, from all three computers. 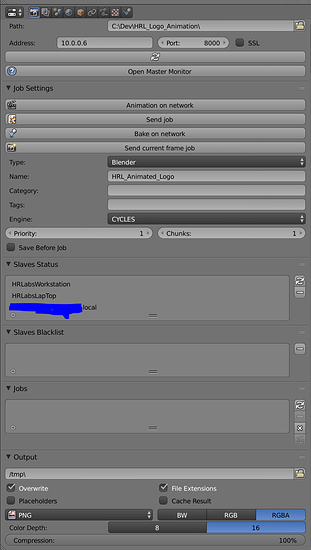 I’m guessing there’s some magical checkbox or hotkey I missed or messed up somewhere, I just need help finding it.

(I posted this same thread up at blender artists, so if you see the same thing, it’s me)

Hi, all. If this thread is still open, here a solution I’ve found: edit the following files using the text editor of your preference: client.py master.py operators.py slave.py utils.py they are in \2.56\scripts\io etrender replace all...

I may have to give this a go if there are no other options, though that’s a 7 year old version of blender. The file path has changed, not sure what else has. Thanks for finding that, I hadn’t run into that idea yet.

I just checked on the newest version, looks like they’re all in C:\Program Files\Blender Foundation\Blender\2.79\scripts\addons\netrenderer

Is this something I need to do on all machines? Or just the Master or Client machine? (same machine)

Doesn’t matter, Network rendering doens’t appear to support GPU Compute, which I figured out how to do properly last night and shave a ton of time off my renders…or…what I wanted to do which was render at higher resolution and not take two days.

It sure does look like it would need to be on all of em.