This is a companion discussion topic for the original entry at https://level1techs.com/video/bitfenix-enso-case-review-special-guest-qain
2 Likes
RevampedTech November 16, 2017, 7:18pm #2

The airflow on this thing is horrid. It has abysmal breathing, Steve at GN showed just how awful it was.

Nice to see Qain in a video again. Decent case but I feel there is better value in other cases around $50 bucks, say a Fractal Focus G. The Enso is the higher end of ‘budget’ IMO.

Just for comparison purposes the Silverstone RL06 Pro which I just had a build done in comes with 4 fans, front 3 are red (I went with red and black), exhaust fan is “normal” and can be had for 75 bucks at New Egg. This is with a mesh front, fine air filters (i.e - they won’t restrict airflow), 4 fans, tempered glass side cheaper then this thing AND far better thermals for air cooling.

Gamers Nexus did some non-stock stuff and got thermals to a reasonable level… but not great. I guess if you are non-overlocking with mild graphics card it’ll work. But if you are looking to have a good overclock and keep your graphics cards cool… yeah, this ain’t gonna fly.

Wow, the front fans only have that gap at the bottom between the case feet for intake? That’s pretty abysmal. One fan in the front only circulates the air inside the case. Use it for heat to torture tests components? I guess you could put intakes in the top to help the CPU but the GPU is probably effed anyway.

Thats what Gamers Nexus did… and it indeed worked nicely. But as you said, graphics card was buggered. It helped a bit… but not much.

If I could I would cut a fashionable slit down the center of the front panel with a dremel then put some sort of dust filter material on the inside for better ventilation, something like this 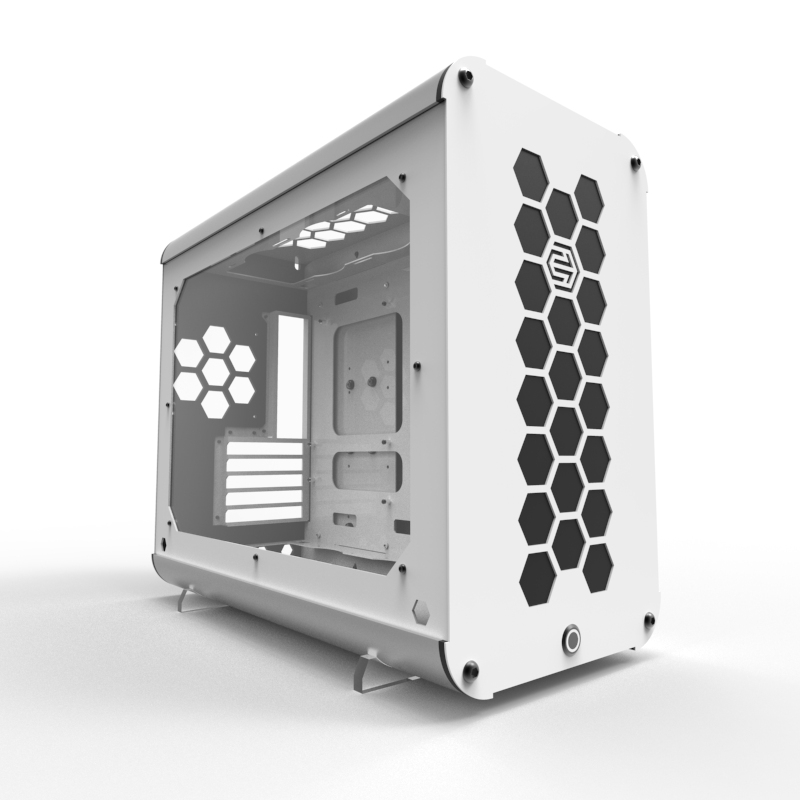 Another case designed around aesthetics instead of functionality. Who cares about airflow when you got pretty lights. That seems to be all the rage these days. Well, no thanks.

Here is another one… that would be look amazing with a mesh front w/air filter… as it stands it has GLASS in front of the fans. So you have TWO 90 degree turns for air.

For sure should have done some quick and dirty thermal testing.

So…is that one story true?

I don’t care for the case, but I get a WKUK reference, I like.

I think its a pretty nice case for the money.
Maybe not the most ideal case for watercooling.
But for just a nice looking aircooled setup it should be okay.
I really like the tempered glass side panel.

As far as the front dust filters are concerned, there is a gab between the filter and the fan,
which isnt the most ideal solution.
However the positive thing about it, is that those dust filters are easy accesable.
Nothing is as annoying as you have to take the whole front panel of a case to just clean a dust filter…

Also if there are any airflow issues, you could also just mount 2x120mm fans at the top for intake.
And then use the back fan as exhaust, that should also kinda work.
That way you will also get a nice airflow over the vrm area.

We did a build with it but we crammed in a 280 aio by bending the case. So our thermal situation is probably a bit different. That will be in the build video.

If any type of conflict rises past creative differences, which would be what I say is all it was, I would be happy to give a deposition of what I know in those proceedings. Of course I wasn’t there for some of it but having been a partner myself I probably do have some insight. Thankfully that end of it all seems to have been a tempest in a teacup – mere creative differences.

and that’s all I will say about that.

They had the chance to receive Steve’s feedback too. But I guess it didn’t make the product cycle in time.

We filmed this part last weekend. Probably the same time that Steve was filming his.
They have a full build with further data coming soon.

Supposedly their pie holes told Steve there would be more airflow… i guess they were sorta right. Hot air flows from in the case, gets trapped and flows right back in again.

Missed many wonderful opportunities to use the Qain Train image instead of the stock steam one during the video.