Biggest cooler that fits in the P400A?

I’m planning a build (For real this time! I’m actually gonna do it!) and I’ve decided that I like the Phanteks P400A as a case. Simple, attractive design, inexpensive, great airflow etc. Now I have to choose a cooler for my 9900k.

I’m looking for the greatest cooling capability at the least noise level. I’m not keen to pay the liquid-cooling tax, so I’ve been investigating giant air coolers. But the issue is that the P400A isn’t quite big enough to fit a Noctua NH-D15—the case only has 160mm clearance, and the D15 needs 165mm. So with the obvious choice eliminated, I’m looking at the paths less traveled. (The Dark Rock Pro 4 is also too tall, 162.8mm)

The most common runners-up to the D15 that I’ve seen are Le Grand Macho RT from Thermaltake (159.15mm) and The Scythe Ninja 5 (155mm). I’m…less than confident that the Thermaltake part will fit. Phanteks doesn’t say exactly where that 160mm figure comes from (mobo surface to plexiglass? CPU surface to plexiglass?), and none of the manufacturers put tolerances on their numbers, so I’m not sure how much I can get away with.

So first, I’m curious if anybody has experience with coolers that barely fit. Are case clearance measurements usually conservative, or more on the optimistic side? Are there any sketchy hacks for getting an extra millimeter? Will “cooler too thiccccc” get me an RMA?

Second, I’m open to recommendations for coolers. There are a ton of options and reviews are pretty fragmented, so good leads are appreciated. Especially if anybody has experience with any of the P400 case variants, since they should all have the same dimensions.

I recommend the Scythe Fuma 2. It should fit.

I own a previous generation of Scythe Fuma and it’s been great. I believe @Automobili3XF has/had a Fuma as well.

Oh wow…I didn’t even know there was a new version, all the reviews I saw were for the old one. It seems like it came out a month or two ago, I guess that’s why. That’s a great tip, thanks much.

Doesn’t PCPartPicker show compatibility for coolers and cases? Is using that website, as a guide, reliable?

I often find it isnt updated and so information always seems sparse.

I believe @Chevy_Monsenhor has/had a Fuma as well.

I did, it was quite an impressive cooler, very easy to install, silent and best of all, efficient.
I ran mine on a 4.7ghz Xeon X5670, nowadays i run a Scythe Ninja 5 on a Ryzen 5 3600x, but i believe this model may be a bit too tall for you if you have ram with tall heatsinks, because this can happen: 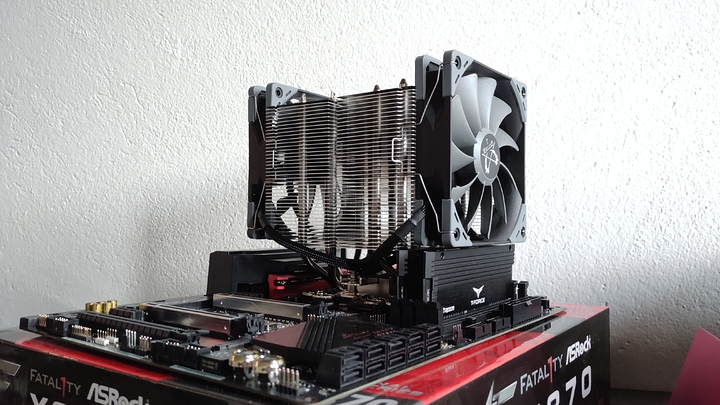 If at all possible, i would recommend you to delid this CPU and exchange the stock thermal paste for something like this.

Re: PCPer, their information generally matches the manufacturer-supplied documentation, but that’s all there is. So, even though the Le Grand Macho RT leaves a nominal 850 microns of space, it’s listed as compatible—after all, 850e-6 is greater than zero. Clearance is clearance!

The Ninja 5 leaves 5mm to spare, and the Fuma 2 leaves 5.5mm in my case. It seems like the Fuma 2 has a little extra horsepower by comparison, and also gets infinitesimally louder at full load, so I’m leaning Fuma 2 right now. I’m not dead-set on any particular RAM kit, so I should be able to find a low-profile part for whatever cooler I end up with.

GN did a video/writeup on delidding the 9900k, it seems like they don’t use paste anymore? I’m not too keen on delidding to be honest. I don’t mind spending an afternoon playing with hardware, but if I kill a $500 part…I’d probably give up on building computers. As a novice, a 4C delta doesn’t seem worth the risk to me. Is there some other angle I’m missing? 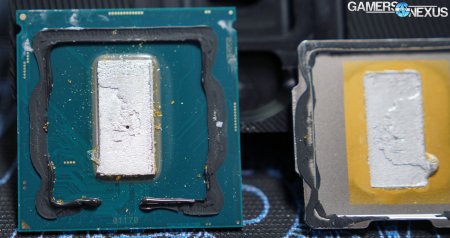 We already know that it’s possible to see performance improvement, based on our previous content and Roman’s own testing, but we’ve also said that Intel’s solder is an improvement over its previous Dow Corning paste. Considering that, in our testing,...

As a final note, it just occurred to me that, as an above-mentioned “sketchy hack,” I could probably use some washers on each thumbscrew to bump out the glass panel a millimeter or two and get some extra Z-axis. I’d need some way to keep the glass panel sealed to the case (A line of silicone maybe? A felt strip?) but it might work in a pinch. But to be honest…I’d rather not go down that road

I would go well below 160mm because big coolers like the NH-D15 usually run the fans not flush with the fin stack but a little above to accomodate for RAM for example.
Why don’t you go for a NH-U12A which has the same performance as the big coolers but in a smaller package?

If I have to guess my NH-D15 stands at 170mm with the front fan resting on low profile RAM.

In the dimensioned drawings from Noctua and others, the fan’s extra height appears to be taken into account. That’s the difference between the D15 and the D15S, which brings the nominal height down from 165 to 160. As long as that’s the case, I think I’ll try my luck with 5mm of gap—at least I have plausible deniability if it doesn’t fit. But if it doesn’t work out with the Fuma 2, I’ll fall back to the U12A.

I got everything put together a week or two ago, no complaints about the Fuma 2. The fit is…snug, let’s say, but I ended up with a little more space than I expected, actually. It’s hard to measure of course—take off the glass panel to get in there, and suddenly there’s nothing to measure against—but it looks like about a centimeter of clearance to my eyes, judging by the photo below. (The right-hand side of the book goes where the glass panel usually ends.) It doesn’t bump against the glass, even when I move the box. 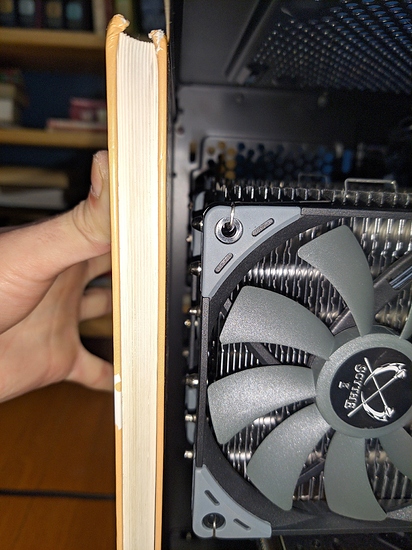 Thanks everyone for the help!

I got the Fuma 2 for my P400A as well after reading this post. Thanks for all the help! Part of me wishes I tried the NH-D15 but it seemed like it’d be a pretty ghetto fit but the Fuma 2 has fit and been good so far.