Hey guys, my mom currently has a really crappy tp-link router that I bought for her 3 years ago when it was $20 and flashed an unofficial dd-wrt build. I did some over clocking, and it worked for a while but now the router literally craps itself once every 5 minutes. I find my mom playing DVDs and CDs for entertainment now instead of the usual Netflix and Spotify and it makes me cringe.

Is there a viable solution for this other than just buying the usual router? I have a really old Intel pentium PC that I was planning to use for pfsense. I bought a tplink wireless card for it only to find out pfsense isn't compatible with most modern wireless cards because of proprietary firmware, and that hooking up a separate router through Ethernet going to the pfsense box was the best solution.

Anyways, suggestions and advice would be greatly appreciated. I'm thinking if the solution is pfsense + router, what router should I get for what firmware? I've always thought dd-wrt was the way to go, but heard that they've lacked security updates lately and that openWRT was better. My moms budget is $100.

If you live in the states, just buy a TMO router and be done with it.
Hint: it is a carrier flashed ASUS RT-AC68U, and can be had for $60 after using coupon code WIFI40.
If you want to dink around with the router, there are guides out there to flash back to Factory/Merlin firmware; but since your mom isnt doing anything special, the router is good as-is

Yeah you probably want to go low maintenance. Otherwise you might be fixing the computer every so often, or manually updating it.
I have had a good run with asus routers, they have good features, seem to be well built and they keep them updated.

Why not buy a wifi extender with an gigabit ethernet port and feed it the connection from the Pfsense machine? I think might work out if you're just looking to add wifi to your network.

I have a pfsense router at home. It's an underclocked E5450 so it pulls a lot from the wall, so I only turn it on when I need it, but all in all it's a nice little machine. I have my old Netgear router (a terrible WNDR3400) hooked up to it as an access point and it works just fine. That's what I'd suggest for now.

I'm waiting for Up to release the Upboard² (or at least send me the beta test kit to tinker with) so that I can try pfsense on that - it's tiny, has dual GbE and runs off of 5v power. Base model will probably be around $100.

Thanks guys I think I'll go with using my existing old Pentium PC, put a hard drive in it with some gigabit ethernet NICs and install pfsense on it. Gonna try to use the existing modem as an access point with dd-wrt on it, maybe put it more in the center of the house for better reception. If not I'll upgrade to a good Asus router as a better access point to pfsense.

Thank you all for your time :)

Trust me man, just get her that $60 ASUS from TMobile. Playing tech support with your parents on a weekly basis gets really old, fast.. Also consider, that Pentium will probably soak up 4-5 times the electrons, compared to consumer grade AC1900 routers.
$60; you'll get a damn good router, with enough bells and gongs to let you do some neat things with the ASUS. You will not regret it :-)

Gotta agree with @AlAl on this one. You're getting a router for your mom not for yourself. It's better to just buy an off-the-shelf router because it'll use much less power (old people tend to complain about that a lot), and it'll likely be more reliable long term, with less check-ups needed on it.

Sure, it'll be a piece of crap, running underpowered hardware, and is very limited, but so what? Your mom will probably just go onto the internet for Netflix, YouTube, Facebook, and other very basic stuff. She doesn't need anything special.

Yeah maybe you're right. The only reason I consider it is that she already has all the stuff needed for pfsense+router access point. Plus once I set up pfsense it shouldn't really need any maintenance other than if the computer was to crap out. Then again you're also right about tech support... If it was to crap out I wouldn't be able to fix it over the phone. Could you guys link me to any specific routers you would recommend for her budget?

Could you guys link me to any specific routers you would recommend for her budget?

Hint: it is a carrier flashed ASUS RT-AC68U, and can be had for $60 after using coupon code WIFI40.

You'd be hard pressed to find anything remotely on par for that price-point. I own a non-TMobile branded version that has been configured as a media bridge for my HTPC; It can get pretty close to saturating the 1Gig ethernet, between my two PC's, wirelessly... 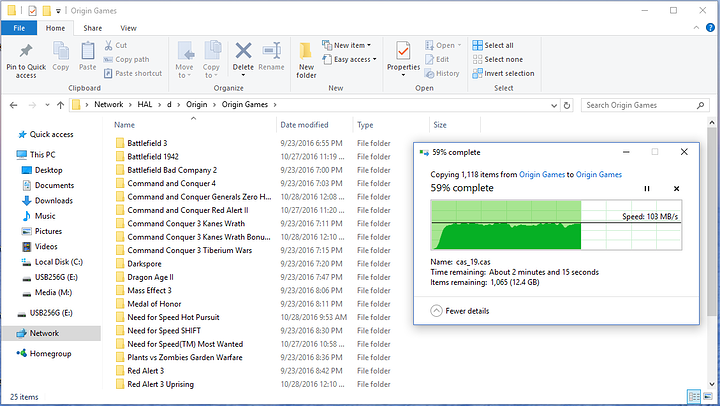 NetTransfer.PNG1129x637 81.4 KB
Might be possible to fully saturate 1Gig if both storage devices were SSD's..