I am just wondering what the best GPU for gaming is. I have heard people say that the new AMD R9 Card is going to be cheaper than the Titan yet have the same performance.

So tell me. Hands down, the best GPU you can buy today?

Depends on the game, out of current single gpu cards it'd be GTX 780/Titan, if dual gpu cards are taken into consideration aswell then HD 7990. Nobody can tell what perf. the r9-290x is going to be since there's no reviews yet.

How come the Titan costs so much more than the 7990? Is it just the build quality that makes it better or what? I have the GTX 680 right now and I was thinking about upgrading my GPU to the Titan if I can make enough money to do so. I just feel like there's a reason why it costs almost half the price of the Titan.

Nvidia GPU's overall are really overpriced currently, the HD 7990 used to cost 999$ aswell but AMD has been cutting prices on everything, probably to clear retailers stock prior to new cards. Don't get the Titan if all you do is gaming. It's a really bad deal. Aftermarket 780's can get to or exceed Titan perf. at much lower price.

Edit: it comes with 8 free games.. So basically if you consider the value of the games the card itself costs you only ~300.

Well, my rig is currently built for gaming and I practically use it for gaming only. Which manufacturer should I buy the 7990 from? Sapphire, MSI, etc. Who makes the most powerful one? Or is it all the same?

Since they all use the reference design, they're pretty much the same. I'am assuming you're gaming on a single monitor though, if not, then Nvidia cards are a better option as there's a frame pacing issue still with multiple monitor setup on AMD dual gpu cards.

Well yeah, I forgot to add that I do use Nvdia Surround (3 monitors). So is the Titan the best option for me or no?

Aftermarket 780's are definitely a better option, look into Galaxy 780 HOF and EVGA 780 Classified. They're around $700 and match or beat Titan in games. They also overclock higher if you were planning on that.

The r9-290x does have some benchmarks out that show its better than a titan in some games... so we will have to see what happens as more reviewers verify these benchmarks.

Well I can't get the Titan because my PSU is only 550 Watts. On Newegg it says that the Titan needs a 600 Watt minimum. So I guess the 780 is second best, right?

What about the MSI N780 LIGHTNING GeForce GTX 780?

The 7990 is a single pci-e lane graphics card -- and it's the fastest. (This really only takes into effect with a motherboard with only one slot.)

With regards to the frame pacing thing... Unless you know for a 100% fact that it will bother you, it's not worth spending 400$ more on a titan or 100$ more on a 780. It doesn't bother most people, so if you were a betting man, you would go with AMD (and if you find out you are in the minority and it does bother you, return it and get a 780).

AMD has eyefinity, which is basically the same as nVidia surround.

Best single gpu-->titan or 780, the 780 is a cut down titan and performs a little worse, but they come with better coolers and can overclock further because of that (and are at least somewhat reasonably priced).

The r9 290x should be about as good as a titan, itll probably be a far bit better once the driver are refined.

I primarily think this is my best bet because of the many fans, but I don't think I'll have enough space in my case for it...

Welp, never mind that Gigabyte Windforce one; it needs a 600 Watt PSU... Nor do I think I have space for it in the case. 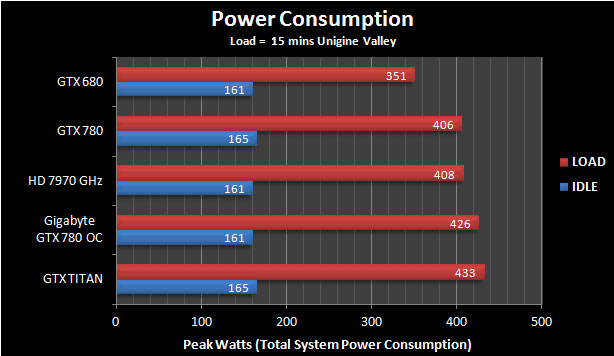 What 550w psu/ 12v combined amperage do you have and what is the rest of the system? The total number the manufacturer prints on the box doesnt mean much, Ive seen a ``600w psu´´ yesterday that didnt even have any 6 or 8 pin connectors and wont even power a budged gaming card, a 500w evga psu on the other hand would power a titan or 780 easily. If you have a quality 550w psu there should be no problem.

If you intend to spend 600$ on a new gpu buying a new psu for under 100$ in case your 550w one doesnt cut it wont hurt to much anyway i presume.

Here is a comparison of the most popular 780 models http://www.youtube.com/watch?v=MtIl-W4hqrA