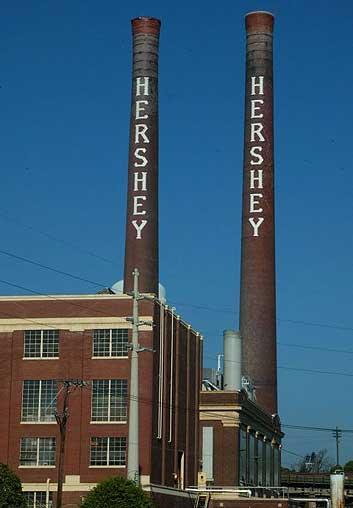 This summer I was fortunate to be able to travel to many wonderful destinations in the great state that I live in Pennsylvania. A state that is known for having some of the largest beekeeping operations in the United states and the state where the dreaded Conley Collapse Disorder was noticed and brought to the worlds attention by a commercial beekeeper but I am not going to talk about the may issues that bees face today. (Well not in this blog post anyhow.) Instead the story I want to tell today is about one of the Pennsylvania greats and a little story about a product that has since faded from memory.

This year for WifeSyndicate's Birthday we decided to take a fey days and and pamper ourselves in the lap-o-luxury in the heart of Chocolate Country. Hershey PA. Here we would see many things Chief among them the Grand Hotel Hershey and World renowned Hershey Botanical Gardens Where I was excited to see what types of bees I could find parossing the many beautiful blooms. What I wasn't expecting to see was this 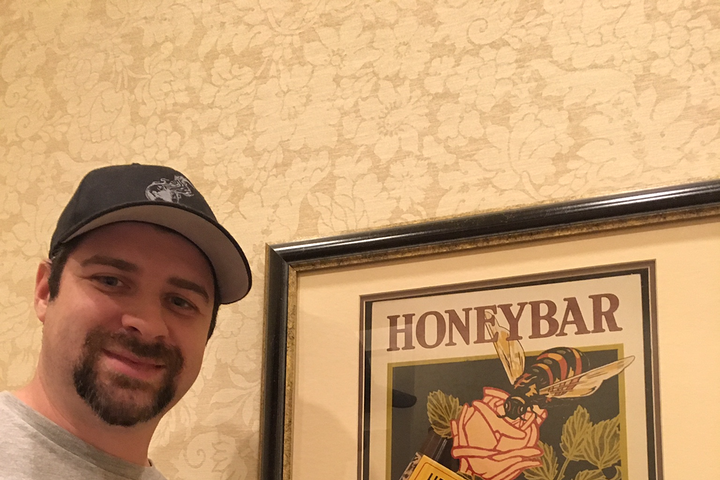 A reproduction of an old advertising piece for the Hershey Honey Bar with a majestic depiction of Apis Meleferia herself. Reading the add description of the bar it sounded delicious and I was amazed I had never heard of this gem of a confection. Where had it gone what what happened to the Honey Bar? I couldn’t stop thinking about it. Even while having the absolute best meal that I had eaten succulent Lamb chops with perfectly prepared Asparagus or something I cant remember I was to busy thinking about the Honey Bar. Even aided by the most amazing grilled Octopus I have ever had the pleasure of my plate could not overcome the wandering of my mind back to the Hershey Honey Bar. 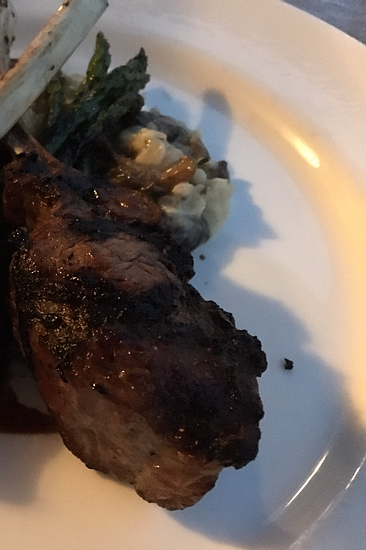 For the rest of the trip I looked and Looked. I knew that this was a long discontinued product from the great candy company, but hoped that the candy might be available in some limited run and be on a shelf in the corner of the Gift shop at the Hotel or Chocolate World. I hoped that with all the attention given to bees over the past few years that I might find something here in the town of Hershey. Alas no sadly I wasn't able to find anything but the print that I had found on the wall of a little used stairwell somewhere deep inside the Hotel Hershey. To say the least I was far from satisfied.

So fast forward a few days and many poolside drinks later and I sit down at my PC and start to research . Some quick google searching and BOOM the Hershey Community Archives finally had some answers for me. The town of Hershey is very passionate about it's history and its deep rooted ties with the candy company for which it is named. The good people at the Hershey Historical Society and the Hershey Community Archive have preserved and shared detailed information about both the town and the candy company.

After reading a few blog posts and a few emails exchanged with Tammy L. Hamilton one of the Archivist's at the community archive I am ready to share with you my loyal bee and food enthusiasts of the Internet the story of what I am sure was a delectable delight of Milk chocolate and Honey married together in one tantalizing treat Ohhh yea Im getting hungry just thinking about it.... 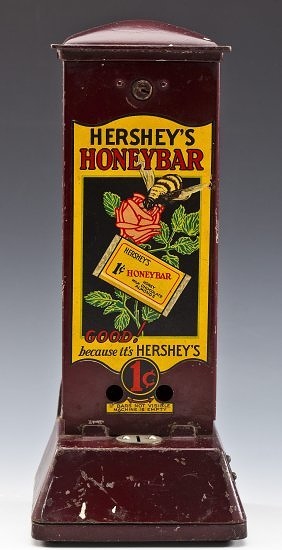 So in 1927 Samuel Hinkle the lead Chemist and others tasked with developing new products for the Hershey Candy Company introduced the Hershey Honey Bar. A milk chocolate candy bar containing crushed almonds and Honey Nugget for 5 cents US. 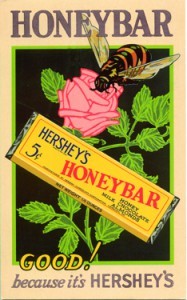 Despite having so many good things at such a reasonable price sales of the Honey Bar weren’t great. Hershey redid the labeling attempting to bolster sales of the product but the repackaging didn’t seem to turn the tide helping the treat make it's way to the taste buds of candy lovers so in 1935 the company felt that a re branding was in order. 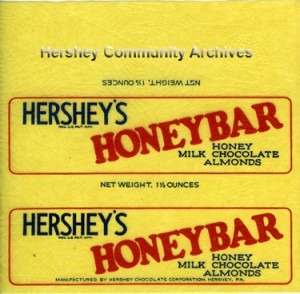 The name was changed to Hershey's Honey Almond Milk Chocolate. Not a very catchy or engaging name if you ask me. Apparently the company felt the issue with the Honey Bar was that people wen't quite sure that this was a candy bar. I don't know what they thought people thought it was if it wasn’t a candy bar so the new super descriptive name was chosen. And the packaging changed from a beautiful eye ceatching yellow to a wrapper looking very much like the traditional Hershey Bar. Probably this caused the bar to be lost among the other Hershey products further continuing the flat sales of the product. 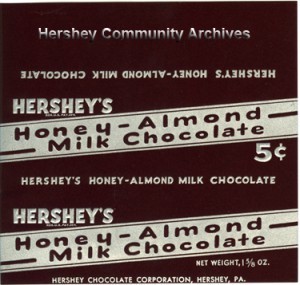 After a few more years of less than impressive sales the candy underwent one final re-branding in 1939 again with a name that favored description Hershey Nugget Almond. Dropping “Honey” from the name . The Honey Bar now with it's new name was one of 5 candies included in Hershey's miniatures along with Hershey's, Krackel, Mr.Goodbar, and Bitter Sweet. All of which are still in production today only bitter sweet was renamed to Special Dark. All cooler names than poor Nugget Almond was it poor naming that doomed this delight to mediocrity during its lifetime? I don’t know but it couldn't have helped. 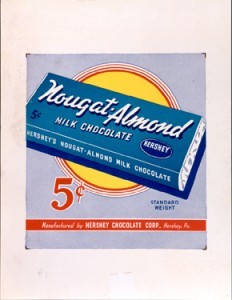 In 1942 in response to wartime rationing Hershey was forced to consolidate its product line and the Nugget Almond bar was discontinued and relegated to the pages of history. (Thanks 1940s Germany you now suck for yet another reason) 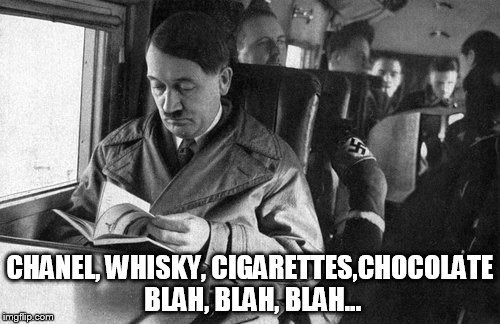 So now what? the Honey Bar has been dead for decades and I still want one. Well after inquiring to Tammy back at HCA as to weather this bar had a crunchy or soft nugget she assured me that it was a hard nugget. I began looking into how I might be able to make one. A task I wasn't looking forward to. Baking has never been a strong suit of mine and even if I was a good baker How would I know if I got it right. I wouldn't lets face it I may get close but I would never be able to taste one of these marvels just as it did off the production line from the plant in Hershey I could only ever hope to get close with all my efforts. I was resigned to not have to deal with the mess in my kitchen and leave the experience up to my imagination. 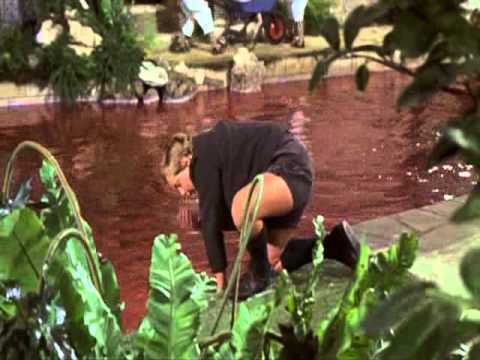 That was until I saw something in the candy isle at my local drug store. Behold Milk Chocolate Toblerone with almonds and a honey based nugget. I know it's not Hershey's chocolate Toblerone milk chocolate isn’t to far off from the iconic American sweet and all the other components are there in those little brown tri-force shaped pieces. I have to admit that I felt a bit of emotion well up inside as I thought of the poorly marketed morsle of pure goodness as I chomped slowly on the delicious morsels of what was surely an inferior imitation of what could have been an iconic American candy. It still was pretty freaking good though. 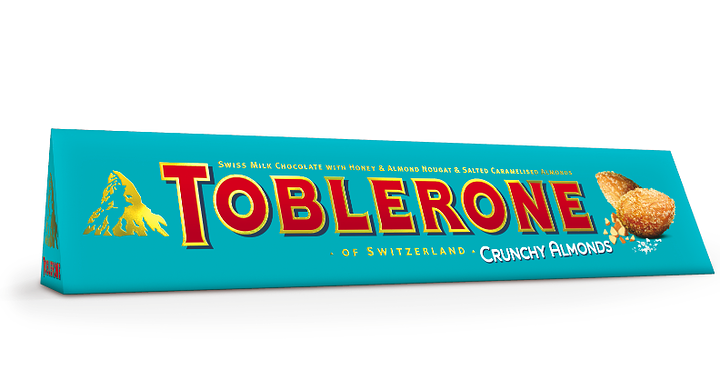 As I mentioned earlier in this post Hershey has an amazing botanical garden. If you ever get the chance you should try to visit it. My hope is that one day that someone there will be thinking about bees and how important they are to flowers and in an effort to bring needed attention to the plight of the honey bee work with the powers that be over at the candy company to bring back the Honey Bar as part of a campaign to save the bees. As with any good recipe all the ingredients are there it will just take the right person to figure out how to put them together and maybe one day we will again see a Hershey's Honey Bar.

Now i want a Honey bar, ill see if my sister is game to help me one of these days.
Always appreciate your posts, thanks for sharing.

Thank you. I love how much people seem to enjoy them. I wish I had more time to do more.

Thank you everyone for all the "likes" finally got the "Nice Topic" badge! I will try and do some more Bee Sides if I run into some interesting topics.