According to a article that came out today by Anadtech, in which an overclocker was capable to overclock a non K Skylake cpu on the BCLK with a modified super micro board.
Asrock claims that they can do this aswell with a simple bios update.
If this is true, then it would be awesome news.

- a few quotes out of the article.

ASRock knocked on my Skype chat to tell me they can do the same thing,
and I received a string of messages and emails saying that they can do
it on their motherboards, such as the Z170 Extreme7+, with nothing more than a simple BIOS update.
ASRock forwarded me images saying that on their Z170 OC Formula, they
can successfully adjust the base clock of the Pentium G4400 by 20+%,
the Core i3-6300T by 20% and the i5-6600 by over 30%. I was told that
they will be rolling out a BIOS update to a large number of their
motherboards after internal validation has been carried out and this
should give a slow trickle of BIOS updates over the next week or so.

I should point out specifically that ASRock states that their results (20-30%
OC) were all done on air cooling. 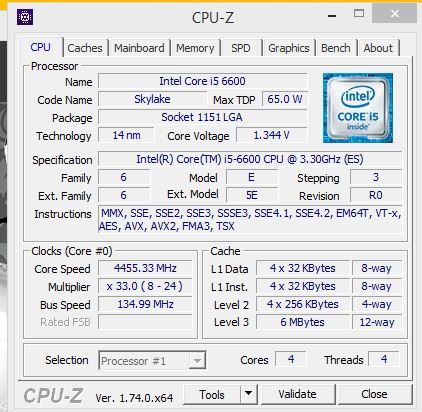 I am not being told (yet) as to what is required on the manufacturer
side to do this, and I have a small amount of conflicting information
also depending on whether this adjustment requires a physical change on
top of the firmware adjustment. I suspect something in the chain that
shares the clock domain with the CPU is being given an extenal reference
clock, which is not part of Intel specifications but some motherboard
manufacturers are doing automatically which requires some firmware
adjustment. When all the motherboard manufacturers are doing this, then
the exact reasons why should make its way out into the open, along with
lists of compatible motherboards. Though it is worth noting that any
BCLK overclock on this scale will result in the integrated graphics
being disabled automatically by Intel's VGA driver if it is installed -
before installation, the integrated graphics can still function I am
being told.

Thnx to @GigaBusterEXE for posting this in the Lounge.

This is kinda exciting news.
I think this would be an interesting item to follow. One of the main reasons to purchase a motherboard with Intel's flagship Z170 chipset is support for memory overclocking, which all other 100-series chipsets aren't supposed to allow. However, if you're an owner of a non-Z170 board from ASRock, you…

Would indeed be interesting, if its also going to be possible on H170 chipset boards.
Asrock has done such tricks in the past aswell, with their non Z overclocking profiles on B85 and H97 boards,
if i´m not mistaking.
But it was not possible to overclock a locked Haswell cpu it self that time.

Also the new Xeon e3´s will probably not work on consumer motherboards anymore.
Which would be a bummer.

I'll wait until someone actually tries, could be a load of crud

Yes, its ofc WCCF-tech, but if they are right,
then it would be sadd.

Yep would not be suprised if mobo manufacturers would come with a custom bios for that aswell indeed.

Something tells me Intel isn't going to let this be a thing... with this new architecture you don't even need multiplier to get a good overclock so it would undercut the k series sales by a lot especially since they jacked pricing up.

It would be nice to go back to the equivalent of buying i7920 instead of a 975 and overclocking it to be faster. But i don't think Intel will let that happen again.

They should really just unock all their cpu's, because not one solution is right for all people. With things like UEFI, it should be pretty easy and simple to overclock. I mean, they're protecting you...

but windows doesn't protect you, if you try to delete reg keys or system 32.

I understand the whole perspective of not wanting software to damage hardware. But if you're overclocking a CPU, you should know what you're doing, and you probably are using your system unit for something other than gaming. Some sort of rendering or cpu intensive process.

I think intel is more focused on their new 10nm process and skylake-e / cannonlake.

UEFI should easily take care of the overclocking bios updates with current K model cpu's, but who cares?

Well if Asrock is going to bring those bios updates to their mobo´s, which would makes it possible to overclock locked skylake i5's.
Then this will be realy interesting.
The i5-6500 at 3.2GHz for example, is allready a very decent "budget" cpu for gamers.
If it would also be possible to also overclock it a littebit on the bclk with just a simple bios update,
then that would be awesome.

i mean the price diffrence between the unlocked 6600K and the locked 6500, is still massive.

And Asrock has released the beta bioses for SKY OC.

Would this be why the i3 6100k i was looking at seemed to jump up in price? I imagine if you could overclock it enough the dual cores wouldn't matter and make a good budget lanbox.

this would actually make the z170 platform practical over the z97 whereas before price difference was too large but if you're an overclocker it makes sense now.

Yeah i definitely agree with that.
If you are looking into a core i5, the locked skylake and haswell i5´s dont differ that much wenn it comes to pricing.
This exaly makes the i5-6500 an interesting chip.
The only con is that Z170 boards are slightly more expensive.
However Asrock has also made custom beta biosses for the entry Z170 boards.

Asus have released Bios updates to allow non-K OCing as well. Only on the E, Deluxe, A and Maximum VIII series boards... Nothing for the K board i'm looking to get for this non-K OCing setup...

I don't see why they wouldn't include those boards, though. We'll just have to wait and see.