Battlefield 4 and Call of duty: Ghosts!

I would like to hear your thoughts about the games, and which one you are going to buy. What do you expect, and why?

You are going to start a flame war...

But yeah, I'll be buying them both as I'm a fan boy of both series, and it's tradition to buy every Call of Duty, even if it's terrible.

Not a Call of Duty hater, but its just a bunch of bullshit and not fun to me. I love Battlefield games, but haven't seen everything I need to from BF4 to have made my decision. BF3 is still a broken game, and has many things in it that if return in BF4 could make the game unenjoyable.

What's wrong with BF3 apart from it being from EA and being on Origin?

Just COD pumping out more stuff as often as they can for the fanboys to buy, even though it's all the same rehashed crap. 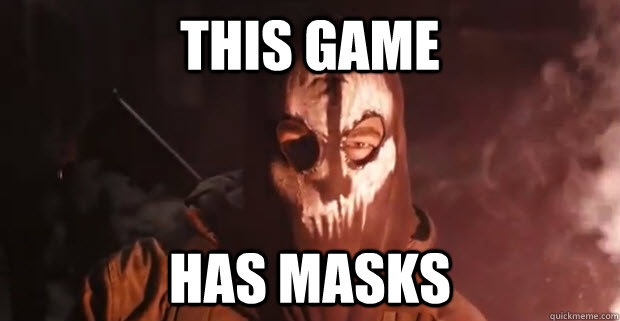 I don't know anything about BF4, but BF2:BC has been my favorite BF thus far. BF3 was a bit of a disappointment.

I'll probably get Battlefield 4. I loved Bad Company 2, and Battlefield 3 was fun as well. But if they bring back the total destruction deal in Battlefield 4, I'll be really happy. And I enjoy the bigger teams, feels much more grand than the CoD Maps and gametypes. And there's just a lot more freedom to do things differently.

I don't really like either of them too much.In the event that I do buy one of them, I would buy BattleField 4.

I whant a cod game back in ww2 back when thay where good games not all this 'modern warfare' junk.

AND treyarchs attempt at a ww2 shooters dosent count it was terrible.

Bf4 is looking good i dont know about the new cod as ive only seen masks and hairy arms?but at least its going to get a new engine...i am not holding my hopes high on that one :/

As for the games, I've had so much fun over the past 2 years playing BF3 - there is no way I won't buy BF4. I hope they fix the clientside hit detection, and put in some competitive gaming features. Apart from that I'm good.

I might grab a pre-order of BF4 if I feel like it, and if I don't I'll grab it when they release Premium Edition.  As for Ghosts, if they don't have something that is a significant step forward in the series, I'm not spending money on it this year.  Especially after they tried to make the game look state of the art with this stunt:

COD in general,  Good fun arcadey shooter. However, once you play one of the recent iterations, you've played them all. Occasionally, Treyarch likes to do something different, but for the most part the series is the same, and it can get really bland.

As for BF4, I think it's too soon for them to release a sequel to the flagship BF games. I rather enjoyed the spin-offs like 2142 and BC littered between BF 1942, 2, and 3 etc etc. It added a new flavor and change of mood. Right now, it just feels like EA/DICE are aiming for an AAA cash-in series cloned from COD. Sad, considering the same approach killed MOH.

I'm done with anything EA. I still lan COD2 with my mates every couple of months.Good times. Cod 4 was the end of that franchise for me.

i won't be satisfied with cod untill they release ONE title per platform and just release different dlc for maps, guns, and gamemodes

because that's really the only difference between any of the games

BLACK OPS 2: you have to pay another $60... because modern warfare 3 doesn't have zombies

I think the current Battlfeild/CoD feel bulky, concerning movment, and i'm not a fan of aiming down sights in multiplayer especially since it changes your sensitivity. Why would any want to play with 2+ sensetivities. I'll be sticking to counterstrike.

Same here i still play the old original cod and cod 2 call of duty 4 realy killed off the game for me.

Maybe it was the release of the xbox 360 with cod 2 that turned the infinity ward guys in to a arcade for the masses pc port into a console and then we get a console to pc port game....that upsets me. :/