Self explanitory
I had such high hopes, Walter Konig, Torri Hitchenson and Christopher Judge in a sci-fi show!
Konig was awesome in Star Trek and Babylon 5 and the other 2 were awesome in the Stargate series.
I felt soooo bad for them. The writing was horrid and their costars looked like they were just grabbed at random from a local methadone clinic. 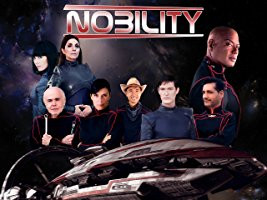 The one star reviews were comedy gold!

Hmm reminds me of Nob and Nobility for some reason.

Is it just a pilot that has been done so far? They are usually very bad anyway and put me off most shows right off the bat.

Bad Sci-Fi has a strange arc to it.

Just Bad - but with some redeeming qualities so you sit through it.
Really Bad - which is sub-divided into turn it off or watch it to the end to see how bad it’s gonna get.
Hilariously Bad - ala MST3K
Intentionally Bad - which can either be so bad it’s good or so bad the jokes on you for watching it.

The last Bad Sci-Fi that I liked was Lazer Team.

Directed by Matt Hullum. With Burnie Burns, Gavin Free, Michael Jones, Colton Dunn. Four losers are thrust into the position of saving the world when they stumble upon a UFO crash site and become genetically equipped to the battle suit on board.

Loved the book, not since Dune had I seen a book so ruined in a movie.

Created by Robert Rodat. With Noah Wyle, Drew Roy, Maxim Knight, Will Patton. Survivors of an alien attack on earth gather together to fight for their lives and fight back.

This show starts off at a solid 7/10, and loses a point and a half each season until you’re forcing yourself to watch next episode just so that you know it’s not getting any worse, and then it does and you force yourself to watch the next one.

The thing is, the decline is gradual. There’s no big turning point in quality. Watching is it like being a frog in a slowly heating stock pot, you can’t identify exactly when it got so bad. You keep telling yourself it’s good because of the premise and how well the first season went, but by the end you’re wondering if you’re dumber for having watched it.

#1 was pretty silly fun.
The others are an obvious cash grab because they couldn’t believe they got away with the 1st one.
A few classic scenes, but not enough to subject yourself to watching the whole movie.

Like slicing a shark in half on top of the Empire State Building with a chainsaw and finding his wife’s arm that was bitten off in the first scene and then pulling the ring off of the gory dead hand and proposing to her again.
How romantic!

I was just watching that… So bad

So while we are on the bandwagon of listing our fav bad scifi films, here is one I found funny for stupid reasons. I was laughing at it mostly.

Is it just a pilot that has been done so far? They are usually very bad anyway and put me off most shows right off the bat.

Pilots have to be good. If a pilot isn’t well done, it’s not going to get a season picked up. Then again, there are plenty of horrible shows that get beyond their pilot. So yeah…Hollywood.

I would counter that slightly. I see a tendency for pilots to purely get people watching the show, by adding gratitous sex scenes and other things that appeal to the lowest common denominator. Things you typically might not see in the rest of the series.

Sure the people who make the shows want to make a good show, but the ones funding the show want to make money.

I wouldn’t necessarily go that far, but pilots do indeed test out things that don’t make the cut for the actual show (hence one of the reasons for the nomenclature of “pilot.”)

As a science nerd nearly every thing I watch on TV triggers me…Is sad.

As a science nerd nearly every thing I watch on TV triggers me…Is sad.

I knew someone in college that studied media. He found it extremely difficult to enjoy any form of mass media afterwards, because of the media literacy classes he had to take. He finds himself analyzing everything. He says he’s smarter and more aware of things because of it but that it changes things forever.

I saw a good, bad one last night.

I first I thought ‘what a goof, this movie looks like 1970’s sci-fi like Battlestar Galatica or Space 1999’ with cheesy special effects. Then I realized it was a future that was still stuck in the 1970’s with drug usage, self-centered quasi-spiritualism and Harvey Wallbangers. Pretty bad. A real stinker. But if you grew up in the 70’s you’ll get it.

Hey i see you there

I want to watch it after seeing the review, it looks like a so bad it’s good movie

I agree on some points, i think that the show kind of started to lose it’s way once the rebel skitters became a plot point. The one thing i respect it for is either the writers or the producers must have realized this, and wrote the show into a graceful ending instead of it just abruptly dying (i’m still not over Flash Forward getting cancelled). While i’m no fan of seasons 3 or 4, i think 5 was pretty good, especially towards the end. There were some genuinely heart wrenching moments, and while the final scene was pretty bad as far as obvious green screen and lack of a crowd, over all i think the series ended on a good note and not a sour one.