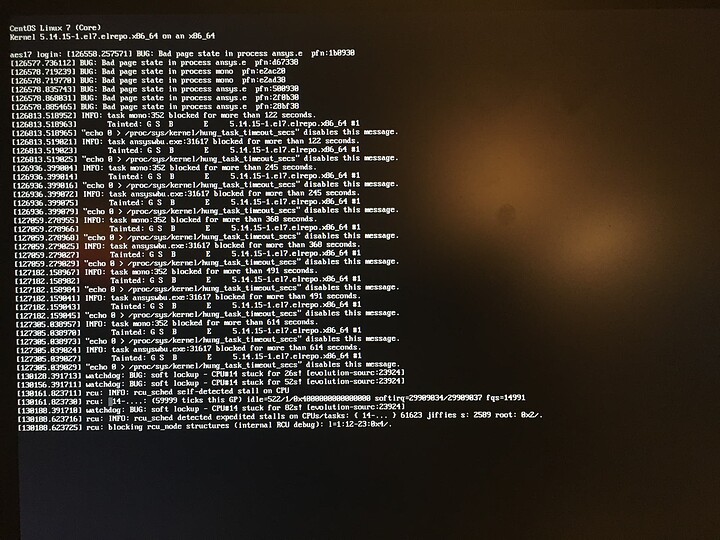 In laypeople’s terms - what does “bad page state in process” mean?

Is trying to fix this hopeless?

Any help in regards to this error is greatly appreciated.

You are going to have to give a lot more context here. What are you even running? A page state could be anything but usually means that there is a bad page table/file that something is trying to access.

It’s the user interface to a CAE application. The process itself is called “mono.exe”, which I understand and recognise that it probably doesn’t mean much to a lot of people on here.

Are we talking CAE Systems, the Aircraft Simulator builder? If so, I understand that some of the information may be classified. If so, this is definitely not the forvm to seek help. Reach out to your CAE tech rep. This definitely should not be happening.

I think that you might be thinking of British Aerospace (BAE) Systems.

Yeah, I’ve actually already reached out to the software vendor before the holidays to see if they have hardware specific deployment notes for the Intel Core i9-12900K and they haven’t gotten back to me yet. Still.

My question here was more about the nature of the error message itself - because I tried googling it/searching for an answer on here first before posting it and the only other thread that came up was somebody asking to whom they should be reporting the bug.

But in my case, I can’t tell if it is a software issue on the part of the application and/or if it is a kernel issue (which I’ve already filed a bug report for the 5.15.11 kernel because it kernel panics with Infiniband), so I am using the 5.14.15 kernel instead, but I still can’t tell if the combination of kernel, Infiniband, and the computer aided engineering application is causing my system to periodically “implode” on itself. (i.e. having this bad page state error that I can’t seem to get the system out of without a hard reset)

CAE is a Canadian company. I thought you were doing Gov’t Simulators.

With that said, yeah, you are too vague and are not providing enough context or background information to troubleshoot or explain your error. The error is too generic in nature, but like I mentioned, is probably and issue with a page file/table. Maybe you want to look into Translation Look-aside Buffers as this could be caused by TLBs depending on what the software is doing and how it exposes that.

That is the best that I can tell you with the screenshot that you provided. The Kernel is definitely choking one something and it looks like it is caused by the CPU watchdog after a failed recover.

“Maybe you want to look into Translation Look-aside Buffers as this could be caused by TLBs depending on what the software is doing and how it exposes that.”