Under Audio inputs and outputs, I have: Speakers/Headphones (Realtek High Definition Audio)

When I pause a video for a few seconds and then resume it, the video
starts with the volume much higher than it was prior to being paused.

Make sure you update the bios if there are any updates.

OP, don't thank us yet. We haven't solved the problem. There is a chance you might have to format, but we'll exhaust every other method before resorting to that. Is anything touched between the pausing and unpausing of the video? Does it happen with all videos? What media player are you using? Does this problem occur when using other media players?

try setting "do nothing" for the sound communications settings. 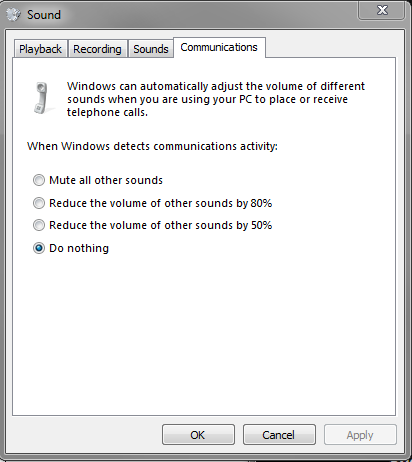 Formatting windows is not hasty.

It should have a very good chance of fixing the problem, and you completely get rid of what ever bug that was causing it to begin with.

My guess is that it was never formatted after he bought it, so there is some dell bull shit causing the problem.

It is too hasty. That's using a hatchet when a scapel will most likely do the job.

I'd prefer not to format my laptop to be honest. Is there anything I can try before resorting to that?