First off, long time first time. I’ve used this forum and Wendel’s guides in my virtualization / VFIO / PCIe passthrough journeys but I’ve never had the need to ask a question, the answers were usually out there.

Second off, I’m not sure exactly which category is best to post this in, so mods, feel free to point (or move) me in the right direction.

So as you can see I’m running a higher end system (I work from home as a Software Engineer + Sysadmin/“DevOps”) so there is justification to some of the extremeness - I’m running multiple LXD containers with multiple databases, KVM instances for testing out sysadmin automation development, and of course, my Windows 10 VM is always running in case I want to pop in for a round of PUBG or WoW or whatever.

Now, here comes my problem - I’m starved for PCIe lanes due to the routing of lanes to slots on my motherboard and running out of room on my “fast” zpool (ideally with ZFS you don’t want to go over 80% capacity, I’m just over 70%). I recently bought 2x Samsung 970 Pro 1TB to fill the remaining two slots in my Asus Hyper m.2 x16 expansion card (it’s basically a PCIe card that has 4x nvme slots - this functionality is supported by a feature called PCIe slot lane bifurcation, it allows splitting a x16 into 4x x4, or 8x into 2x x4).

So I have the drives, but the PCIe slot the expansion card is plugged into is physically wired for max x8, and I assume will only support two drives in the Hyper m.2 x16. I would happily reallocate lanes from my host GPU (1070), giving 8 of it’s 16 lanes to the expansion card to make it full x16. Or a little less happily from my guest GPU (1080ti) as it would be more likely to use the extra bandwidth, but would be much easier to do with PCIe passthrough.

Unfortunately I’m physically constrained for where I can locate the GPUs - the expansion card is single slot width and it just barely fits in my bottom slot (not to mention cuts off air intake to the 1080ti fans) - there is no other arrangement I can pull off in my current mobo / case that would fulfill my needs.

So, the way I’m looking at it now is I need either a new case, a new motherboard, or both.

Now, I’d call myself mid-to-low level expertise in the virtualization technologies I’m using - I’m on my third PC build thats been running the same Windows 10 VM (although I’m now running a new W10 VM after switching to libvirt from command line qemu). BUT I have no idea what effect these dual PCIe multiplexers are going to have on IOMMU groups, as well as the PCIe port bifurcation required to run the Asus Hyper m.2 x16.

As you can see linked above, I have done some research, and discovered the multiplexer chip being used, and it’s datasheets. I also found a block diagram (!!!) of the motherboard in the manual online, I uploaded it as part of this post.

So, if you’ve made it this far, what say ye. Is this motherboard going to support both proper IOMMU groups and PCIe lane bifurcation? From the specs page on the PLX chips it marks DMA as -- and ACS/SRI as Yes - I’m pretty sure those relate to what I’m trying to do, but I’m not knowledgeable enough to know what it exactly means.

As for the case, If I don’t go for a Fractal Design R6 (I’m done with form over functionality, the Phanteks was pretty, but I moved into it from a Define R5 and I feel there is more functionality focus in the Define series). However, I am open to suggestions on other cases!

EDIT: I forgot to mention - I’ve read that these PLX multiplexer chips can add latency - I’m also open to totally different board suggestions, as long as they support the Hyper m.2 x16 and have acceptable IOMMU groups (preferably with a USB controller that can be passed through, currently I’m passing through the USB 3.1 controller, which is in it’s own group). 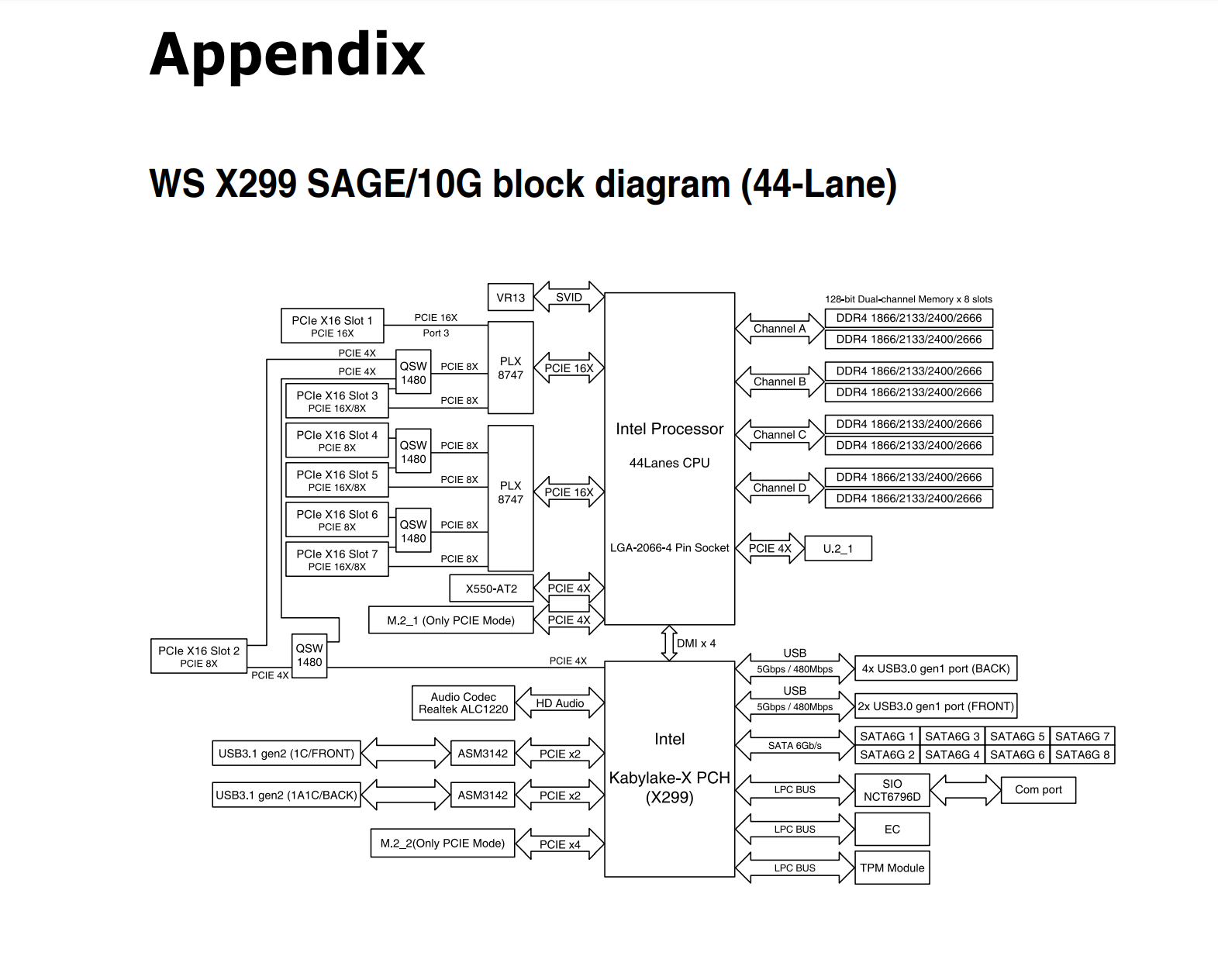 I’ve never heard of an intel HEDT/server platform NOT having proper separation, and this looks similar to a similar server board implementation I’ve seen before that worked fine.

Obviously no one can say authoritatively without the board in their hands but my money’s on “yes.”

I’d recommend asking around in places like the TPP discord, too, to see if you can find anyone with hands on experience with the board.

UPDATE: Asked around for you, apparently the Xeon scalable sage has proper isolation, as well as their x99 ws board, which all work in the same way IIRC

quickdry21, did you ever have any luck with the Sage mobo. I’m contemplating a build with this board and would like to know what you think of it and if it’s getting the job done. I’m trying to find a x299 board with 3 m.2 slots and 5 or more pcie slots, esecially one that doesn’t drop sata slots or bandwidth on slots when you have multiple m.2 in there. I really liked the Gigabyte Designaire, until I read the manula and saw that you lose a sata port for every m.2 you plug in. Please let me know what you ended up doing.

I know this is an older thread but in case anyone is searching for info on the X299 Sage 10G and IOMMU groups, I installed it today and it looks pretty good. Here is the full lspci -nnk from my system:

hello, you still working with your board? ive had 1 for a year and i find alot of, differences in stuff in the Manual, VS what im getting out of the board. For example, the PCIEX 16-1 only will do 8X? i un installed almost all my cards, and it still said, 8X. so i put it in PCIEX16-3 and i get 16X?? m.2_1 says 3x4 but it only show 2x4?? lots of wierd stuff, and i dont know,who to talk to. ive found other problems not listed in manual also. thanks.