Hi. Can anyone advise me on what is the PSU to purchase to be used with the Asus PRO WS WRX80E-SAGE SE WIFI motherboard?

Hi welcome to the Forum!

There are online PSU calculators out there and they all seem to be coherently recommending similar enough PSU ( for desktop usage at least). Personally, i just use online calculators with all the realistic thingss I will plug into it and add an additional 20% of whatever it recommends.

this is not desktop mainboard…

80+ Titanium 1200W or 1500W PSU. I’m getting the 1500W for my Threadripper, seen good reviews on them. And they have a rather good PSU calculator on their side. With all the lanes and PCIe slots on TR and TR Pro, you really want the biggest PSUs with superb efficiency.

You actually could compute for HEDT in the online calculators…

Kindly elaborate? There is a server configuration available with at least one online PSU calculators with all the SAS and SATA controllers you want. Am I missing something?

you could have edited your first post…you did not…

I am looking to build a quad-GPU WRX80 system with the Asus PRO WS WRX80E-SAGE SE WIFI motherboard, but it doesn’t seem like there is a PSU available with enough PCI power connectors.

The connectors required by the mobo: 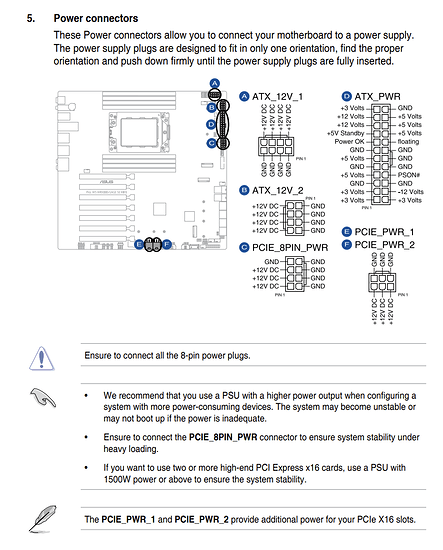 Whereas if you look at the Corsair AX1600i, you only get 10 ATX/PCIE power connections. The Super Flower Leadex Platinum 1600W is a little better because it gives you 2x ATX 8 pin and 9x PCIE 8 pin, however, that’s still not enough.

It seems like the only solution is to use 2x PSUs for 4x GPUs (each with 2x 8 pin) on the ASUS WRX80 motherboard.

In contrast, the Gigabyte WRX80-SU8-IPMI doesn’t appear to require the two additional 6 pin PCIE connectors present on the ASUS motherboard.

Does anyone know of a PSU that could support quad GPUs on the ASUS board?