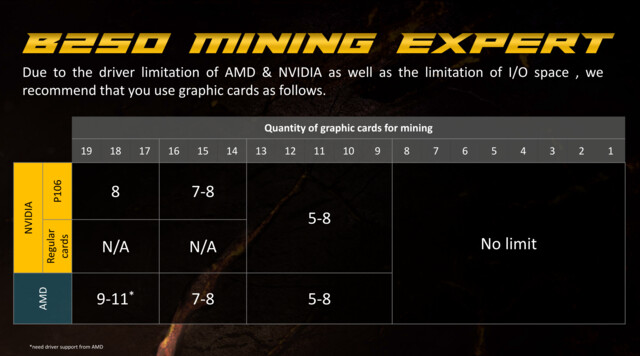 The * is the important part

AMD said quite some time back they were looking into the issue.

You don’t need to passthrough a NIC, I have only one on my PC and networking works fine in VMs (well, Virtualbox anyway).

so if mining you still better still have aux power to your 16x adapter risers or risk problems.

Which is what they’re doing with USB powered risers (which is probably completely out of spec, but if it works who cares).

/edit
saw after writing this that @Zibob already posted the same

ASRock came out with a 13 slot motherboard a few months ago. 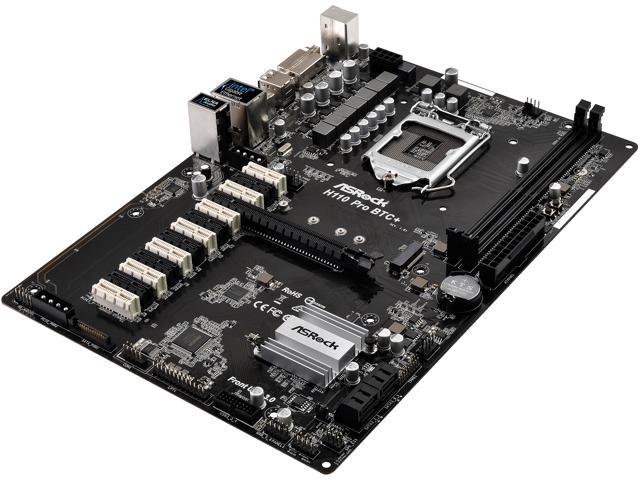 Biostar has a 12 slot motherboard as well. 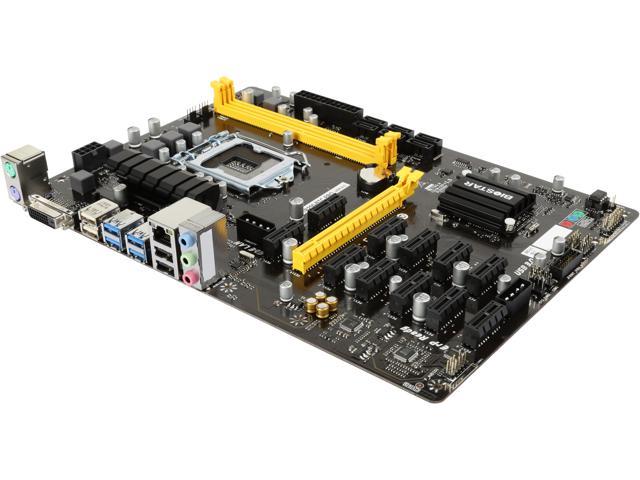 stating directly you can run up to 16x graphics cards (despite having 18 of the 1x ports), then in another slide show a table that suggests there may be a driver to use up to 11 AMD cards… so either way your officially recommend using a mix of AMD or NVIDIA. Annoyingly

Kemoka73 later added that they also said in one of the AMD planned drivers to let you use all 19 slots.

The quotes are getting pretty meta… but yes, and Kemoka pointed out there is even text that says AMD may launch a driver to support all 19 GPU’s

As for NIC’s, fair point, I hadn’t actually considered paravirtualization. Virtual box is very clever like that, with awesomely easy to set up paravirtualized networks, but its also very high overhead as it runs inside a fully fledged OS as a program rather than being assigned hardware more directly. Hyper visors like Xen do support paravirtualization as well, but I (possibly just being a noob) personally found it more hit and miss depending on the OEM of your NIC, OS running as virtual machine and (in the case of very low power hardware) specs of the actual CPU. But still fair suggestion, with some tweaking that may work fine to get all 19 cards mining on the board as announced (with the current 8 card only support, instead of the update for 11 or 19).

Also most of the risers I can find actually use the USB3.0 for signal, as for short runs you can put PCIe1x over them assuming the cable quality is good, giving them plug connectors and an cheaper\easier package than trying to shield ribbons. Normally Power is either molex p4, PCIe p6 or Satapower on the PCB with the 16x slot… USB A or B for power shouldn’t work without a boost supply since the cards are drawing from the 12v rail and USB (outside of typeC) is always 5v, and even typeC doesn’t support the amperage needed (up to 8amps). Yet I really don’t doubt people are just putting whatever of the USB plug and hoping it works, and for most cards (which draw the vast majority of power on the auxiliary PCIe6 and/or 8 pin power connectors) you’d get away with it. Well, until you get one that draws more, then it burns your house down, but such is life for cheap ebay risers.

@Leon_the_Loner What makes you dislike Asus for releasing hardware for a niche like mining? Also while mining is the monetized goal, don’t you think that such board which give the consumer the option of running a great many PCIe cards in one system have other potential uses \ benefits to society?

don’t you think that such board which give the consumer the option of running a great many PCIe cards in one system have other potential uses \ benefits to society?

I’d be really interested if this would work for a Folding rig… not sure how much bandwidth those cards need for folding, but I assume it’s similar to mining where it just needs to load into VRAM once and then starts crunching numbers.

Can you actually make any money with cryptocurrency mining on GPUs any more? I thought they had all be obsoleted by ASICs.

Would make a great hash cracking rig. Maybe some cloud providers will get some and make them available for rent.

Someone buy one of these and just strap a fuck pile of compute cards to it like Power7 or xeon phi’s. Make something insane.

Those would need more PCIe bandwidth tho right?

I dunno I don’t own one.

yep. those need about 4x lanes but 8x is reccomended

Only a handful of motherboards even support Xeon Phi cards, one of the requirements is a BIOS that has 64-bit MMIO support.

I can dream can’t I?

That doesn’t make it true though

Using it as a Folding board wouldn’t work either according to a discussion on the folding forums.

Don’t see why not. Have fun dreaming of booting a Phi on an AM2 motherboard fam.

Also there are Power7 compute cards you can use on x86 platforms???

Also there are Power7 compute cards you can use on x86 platforms???

I only know of Power7 ones. Though I’m sure theres others. Theres also PPC 750X chipsets for PCI.

Yo I know, late response.

Mining to me is like the day trading of the techy world to me. Doing a task that doesn’t do anything but help make more of the nothing, and at the expense of making things more difficult for other people.

As for the hardware itself. If boards before didn’t actually allow to use all the PCIe lanes that would be crazy. Who the hell really needs more than 3 x16 slots? the things I can really think of would be some specialty cards maybe? Everything else typically will sit happily in a x4 slot.