Assistance for a nonprofit

I run a nonprofit RPG library. We travel around sharing the library at events and teach people to use games to work with at risk teens and Vets with PTSD. I am currently deployed to Iraq and have some volunteers running the library for me, awesome people. In the military I am a broadcaster and have not had to build an editing work station for ages , due to having a good editing work station at the Army’s dime.

Well we are going to be doing video tutorials and more for the library when I get home and looking for help of what is the best road to go down for an editor working in a 4k footage.

I have good monitors and multiple 10g network NAS drives and a couple thunderbolt 3 drives.

Thanks in advance for advice.
David
Chief Librarian
Alexandria RPG

What kind of budget do you have and what program do you use for editing?

I will be using DiVinci resolve 16.

Budget is limited. Working on donations to help fund the computer for the nonprofit. 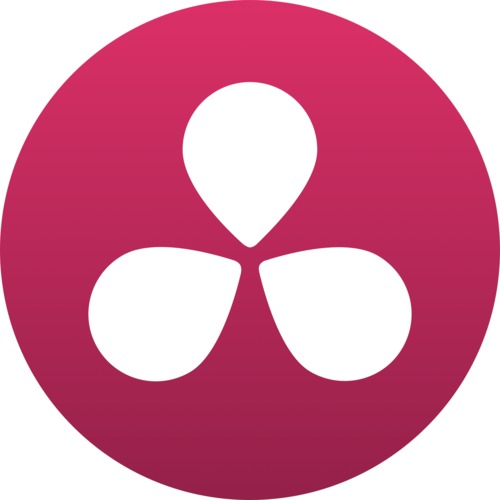 Our Recommended Systems for DaVinci Resolve are application tested and optimized to give you the best performance and reliability. View our hardware recommendations.

GPU still looking into it Min 8gb ram it seems

https://pcpartpicker.com/list/TM8rrV
Is my pick for the setup

If that is little costly, go for a Ryzen 7 2700 + RTX 2060 Super. Not sure anything cheaper can handle 4K video editing.
…
Heck I bet someone on here could donate your cause a system. Any takers??

Thanks for all the help folks.

been tinkering with the builds suggested here. They are all great. We are trying to raise the funds now to help pay for the rig. Thanks a heap folks.

also… Would the new AMD video cards be a better option for content creation vs the RTX stuff?

Unfortunately no, Nvidia is much better than AMD at software and by extension, content creation tasks.

Nvidia is much better than AMD at […] content creation tasks.

For Adobe in generell yes.
When you got software that doesn’t need CUDA, it gets tight. 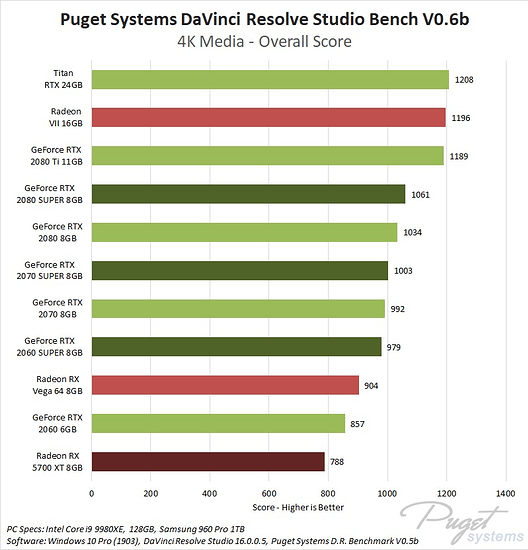 The only AMD that should matter in this graph should be the 5700XT, which lags decently behind the RTX2060. The former crushes the 2060 in games…which means either AMD’s new offering sucks at “compute” or the software is nowhere near as optimised as it should be.

Vega 64 is way too old and inefficient, and Radeon 7’s drivers are laughable according to the internet.

So yeah, for stability, efficiency and reliability, I’d still go to Nvidia.

If you look at the Windows version (current is 1909), the graph is old.

Well… Not sure if all this helped LoL

I will be back in the US in Aprilish time frame and looking to build then. Maybe there will be a better logical option for video performance by then. Thanks again to everyone that is willing to help out. It is crazy how hard these choices get when it isn’t your money and funds are tight.

There is. And it’s more affordable, by a lot.

EVGA recently launched the RTX2060 KO, which basically uses RTX2080 chips that weren’t good enough. Although they’re as good as RTX2060s in gaming, they’re much better at content creation tasks (closer to RTX2070), thanks to some unknown reason. They’re 300 usd.

Also freshly launched is the AMD Ryzen 1600 AF for 85USD, basically a Ryzen 2600 but 2% slower. But more than enough for 4K video editing.

This is HANDS DOWN the best price-performance ratio for budget 4K editing systems.
Have fun.

I think I have something along the lines of what I will be ordering. It is more than I want to spend, as what the Nonprofit can’t cover I will pay for out of pocket.
The MOBO was chosen as it has thunderbolt 3 support and some future growth as well.

I tweaked it a little to drop the price while providing the same performance:

@AlexandriaRPG let me know if you need any help building the workstation! Also are you a recognized 501( c)(3)? Curious if I can make a donation through my company to get it matched.

Thanks, it has been ages since i have built a computer. I remember ISA slots, IRQ conflicts, having to check ram voltage and the like. I thought I was keeping up with tech but Damn there are tons of little things like everything in the M.2 variety.

Any help would be awesome. I can forward the paperwork if needed and do a tax receipt as well.

Awesome, found you guys in our system. Just donated $200 so you should be getting $400, hopefully it helps!