Assassin's Creed Unity launched this morning and, as we expected......, it runs like complete ass.

AC Unity has a lot of the same problems that Watch Dogs had.

It has been reported to have horrible SLI support, poor texture quality, very obvious texture popping, shadow flickering, and various other problems that I'll get to in a minute.

This morning, Total Biscuit posted the following on Twitter in regards to Unity:

"Can't sleep and Unity is out so lemme tell you about my experience so far. I only got access to code yesterday so I'm not that far in but there's a promised Day 1 patch that by the looks of it is SORELY needed. Getting that game to run on max settings is a nightmare, it's a huge resource hog. My 2 980s barely keep up. In the small tutorial area I was looking at some nasty drops one 1 980, prior to Nvidia putting in an SLI profile.

As it stands I can JUST keep it at 60, though it has some drops below at times. The game doesn't really look like it justifies that. It has some killer popin, just like Watchdogs did, actors very obviously and inconspicuously switch between detail levels depending on your distance to them and often just appear out of nowhere and disappear at random.

Lighting is glitchy as hell and overall texture quality is poor. I will say the faces and mo-cap quality is excellent, it actually has a kiss that doesn't look like 2 robots rubbing their faces together, so there's that. The problem that I had yesterday was just the MASS of bugs. Guards spawning in from the sky, NPC actors wandering through terrain and clipping through objects, scripted sequences breaking at random and stealth seems like it's just busted.

I had a guy spot me in a stealth section, run up to me as I was standing and then "lose track" of me. I was right in front of his face, he just wandered off. Thus far the game seems like quite the step backwards. Combat feels much more sluggish than Black Flag, but I admit I have yet to unlock a lot of the weapons and gadgets, I'm not that far in. So I don't have much to say about the gameplay up to this point (its been super standard Asscreed stuff) but this Day 1 patch is sorely needed, because the game without it is a buggy mess." 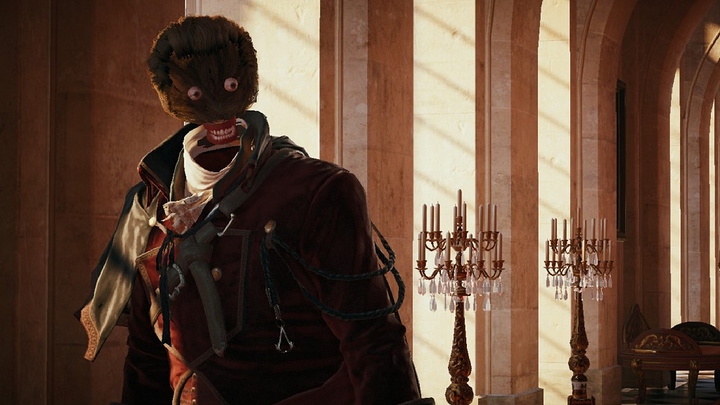 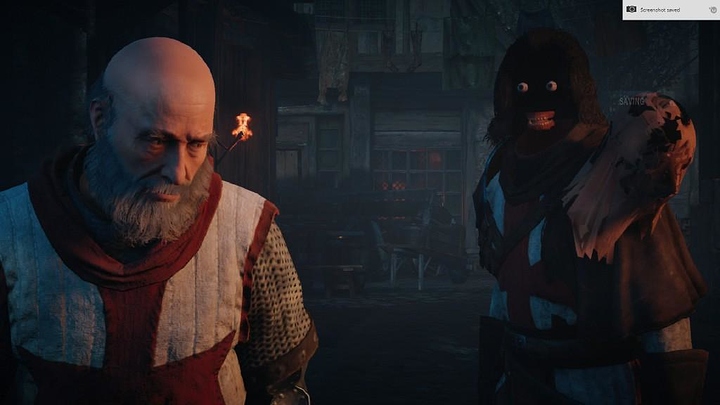 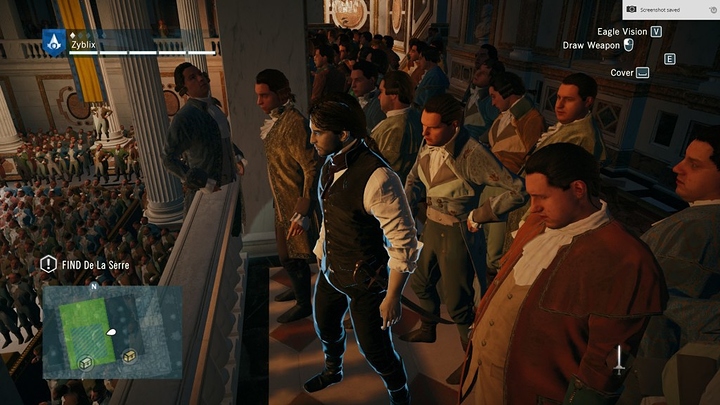 Many users, including Total Biscuit, have reported not being able to get the game to run at 60 FPS even on the lowest settings on average rigs. Users with extremely high end rigs (i7-4770K+2x 980 SLI) aren't even able to run the game at 60FPS on the highest settings at 1080p. 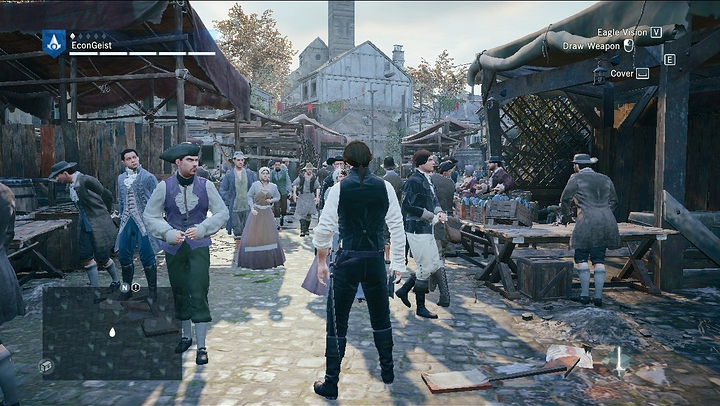 Frankly the game isn't that impressive looking at max settings either as you can see in the screenshots below. 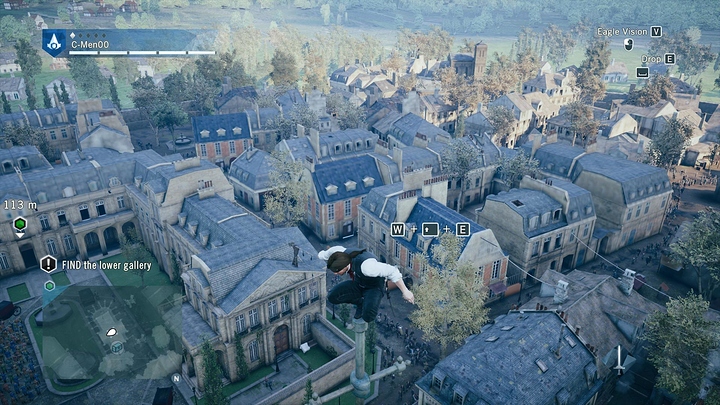 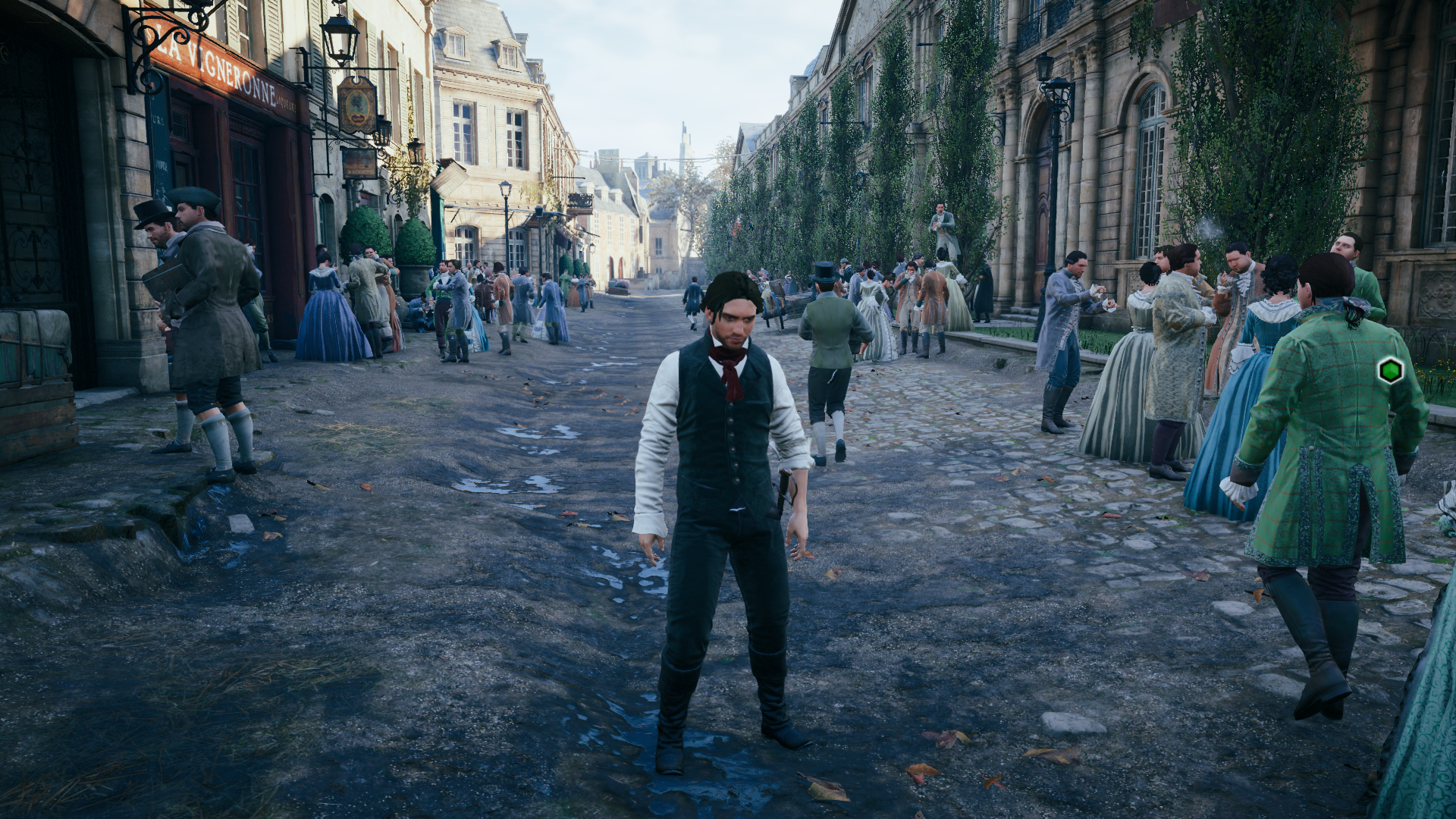 We're really tired of this shit Ubisoft... I won't be suprised when someone finds hidden graphical features or intentional PC nerfing by Ubisoft. I wonder how long it will take ubisoft to stop doing this the PC audience.

The only way to stop them from doing this is to stop buying their sorry excuses for ports; I strongly advise against buying this game and fueling their disregard of our standards as PC gamers

That faceless bug is actually kinda cool, but hell if it isn't creepy.

i suspect this game will do well... and no internet, this is not sarcasm.

We need to Make this an official .GIF for any Ubisoft related threads.

From what i've heard it runs like shit on console too.

Don't know about you guys but I won't be buying anymore of their games until they show us that they give a shit about the games and their customers.

I'll wait to see how Far Cry 4 turns out and if they F that up so long The Division.

Ubisoft is many things. The people who made ACU for consoles aren't the same people who made the PC port. Ubisoft's infamous Kiev studio, which handles the PC ports, are notorious for their recent failures. Ubisoft Montréal used to do a pretty good job when they handled most of their projects themselves, the first AC games being a good example. Now, though, most Ubi games are too big for a single studio to do most of the layout and their coordination has gone down the drain.

As far as I know, Far Cry 4 will probably turn out better than The Division, and much better than ACU (not that it's really hard to do better than ACU...). Far Cry is one of Ubisoft's worst IPs, they should have their MTL studio concentrate on the AC franchise and stop spreading their assets too thin on too many games. But they won't do that, because they think that both FC and AC games will still sell well enough with a skeleton crew handling the development, so they just put the minimum required resources into both.

It runs like shit on everything, pc or console. Ubisoft cann't into coding for x86.  Ether way the simple fact that its an ubisoft game is all the reason anyone needs not to but it.

I disagree that Far Cry is one of worst IP's. I think its way better than Assassins Creed.

Yea I was watching the reviews about the game on consoles and guess what? They run shit too. The console couldn't even hold the minimum of 30 FPS and the weird thing is that even though the PS4 is graphically stronger than the Xbox one, the PS4's fps average was around 22 fps while the xbox one run around 25 fps. Honestly when i saw those problems with the console I was pretty sure the PC version will be shit as well. I can't believe 2 980 couldn't even hold a 60 fps.

Definitely. Assassins Creed has become repetitive. Black Flag was a step in the right direction, but Unity (ignoring all technical issues) is just back to the same, boring formula.

Wow yea Assassin's Creed always been an xbox360 biased game. Gamers gotta learn to stop supporting games that run best only on one console. The only reason PS4 and wii and others are buying it cuz they are basically bored of their games.

On another note can someone try to run this on 4K or on an AMD system?

So.. does anyone test this? Or just say "We are done doing the shittiest job we could. Fuck everyone." I going with the second one

Total Biscuit actually made a video. It's not a WTF is... but it's more PSA about how shit the game is

Well, seems weird considering architecturally the hardware is almost identical. Should be faster on the PS4. The only reason I think it would be sower is maybe it is running at a higher resolution on the PS4? 1600X900 instead of 720p?

Just read about this!

Itis sad because I am pretty sure Crisis 3 looks much better and from memory that is double 1080p...

This had to be done: