Ever since Ryzens release I have been waiting for this. This product, as far as I know, the first AM4 socketed server grade motherboard that is going to be released. This would be great for budget minded homelabbers that don’t need a million Threadripper or Xeon cores. Someone like me for example. This would be an awesome budget VM host.

I cannot wait to get my hands on one.

Here are some of the biggest features:

Very curious that it doesn’t explicitly require Ryzen Pro CPU’s too. This could be very cool.

Yeah wonder what pricing is didn’t look yet

Nice… has ipmi so dont have to waste pcie on GPU if its not needed. 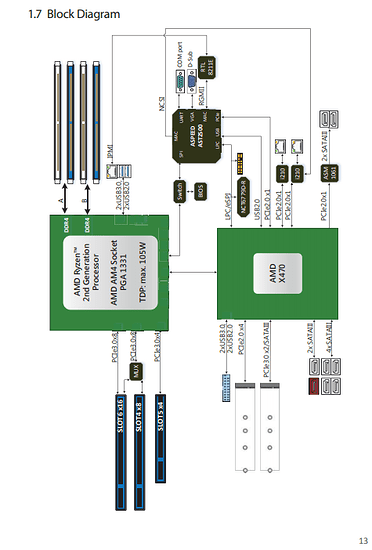 What an interesting configuration… PCIe 2.0 x4 to the chipset for one of the M.2 slots. A little sad it doesn’t have 10GBe though, but at least it has the slots to support it, though it looks as though Slot5 takes the NVMe direct from CPU giving the board all 20 lanes to the PCIe slots.

Yeah wonder what pricing is

If I had to guess it would probably start around 270ish.

A little sad it doesn’t have 10GBe though, but at least it has the slots to support it

Yeah having 10GbE would’ve been cool but I really think that this is targeted for budget boards.

On an M.2 slot? What gain would that of done?

I get that for most people their isn’t really a difference from nvme and sata, I just want it.

How many lanes does Zen 2 have? Did they give us numbers on that yet?

Neato. I’m really excited for this and I hope that other manufactures follow. I would love an ASUS WS board for AM4.

I spoke with Michelle Wu with ASRockRack US Sales.

The mass production date of our X470D4U board is Mid-March, and the board will be delivered and officially available in the US on about the week of March 26.

Unit price is $210 (via US local distributors, Ma Labs or ASI, depends on which you prefer to work with)

Hope this helps everyone.

Hey as long as its not 800 bucks I’d build workstations with that.

Holy shit! This is better than I thought. I was going for 270-300USD based on that it’s the only one out so far.

as if intel didnt have enough to worry about

this could easily help cannibalise a lot of the lower end market.