Are these safe temperatures? 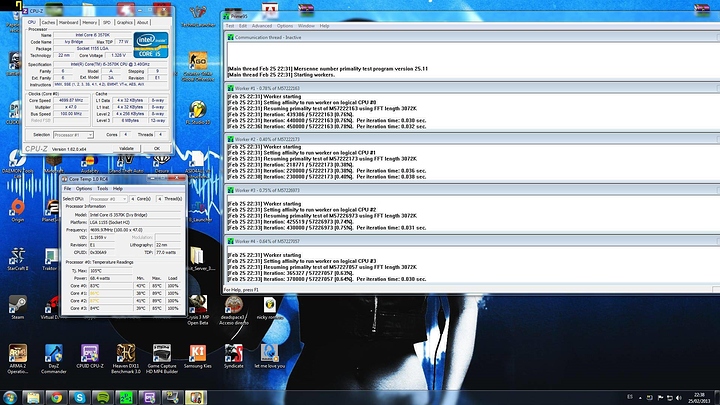 Well it safe, as long as it never goes any higher, your cpu can theoretically handle about 100 degrees, but i try to keep it at 75 to 80 degrees max.

they are really high. hell, i've only seen my laptop that hot maybe once or twice. your cooler probably can't handle that much overclock. try re-applying the thermal paste, see if that helps. otherwise, you will ahve to drop your overclock by ..3 ghz or more

They are a little high. I don't think Intel CPU's throttle until they hit 90 so you should be okay plus I doubt your cpu will ever hit those temps in a real workload. I personally would try to keep it under 80 but as long as your cpu doesn't hit those temps that often you'll be fine.

For a desktop those temps don't look safe to me, i'll try to keep the cpu temp under 85ºC,

laptops can go to 100ºC and be safe, but for desktops PC's you need to keep the cpu temp under 80ºC if you are using the stock heatsink.

the 3570K can handle 105c but i stink it will start throttling at around 95c so you are good but your pushing it pretty close.

What CPU cooler are you using? And did you apply thermal paste correctly?

i'm using a Noctua NH-U9B, and yes, i applyed correctly, thanks all of you anyway :)

Your core voltage is a tad high by Intel standards, you should really be keeping that below 1.29 v. And technically the temperatures are safe, but a bit unnerving, as running at those temps for extended periods of time will cause excessive wear to the processor and can also cause lasting stability issues. Although, given the processor you are using is a 3570k, I don't see why you need to have the voltages much higher than 1.21v. Since Logan showed the EVGA Stinger mini-ITX board running the thing at 4.4 GHz with only 1.195.

They look fine to me. Remember, prime95 puts a unrealisticly high load on the CPU to see the most you'll get.

How are you using the NH-U9B if it isn't compatible with the LGA1155 socket?

I sense this is the problem.

They technically can take up to 90c but jesus drop down that clock man. You don't really want it running over 70c or 80c. If you don't know shit and need to ask what temps are good then don't overclock.

I never said they weren't fine for being produced by way of running Prime95. I said that running the chip at temps like that for extended periods of time may cause excessive wear and possibly permanant damage. It is possible, although not usually probably unless you are pushing too much power through the cores. Also, apparently I've been reading a lot of conservative max Vcore power ratings, because most people will say that anything over 1.2 is somewhat excessive for Ivy Bridge, and that 1.36 is generally accepted as a maximum core voltage. And then

goes and says that it can be pushed all the way to 1.52 v. So, cool. Liquid nitrogen anyone?

Stock 3.4 GHz, now overclocked to 4.7? That's madness, even with a watercooled system.

I don't think 4.7 is an unreasonable speed. I got my 3770k to 5Ghz with a custom loop and hyper threading was enabled. It was a little unstable though so I took it back down to 4.8Ghz

You will not see that under 'normal' loads, blah blah blah insert "except video encodeing here"

I'm to drunk and lazy to pull up the 'time', but if that's the hotest you get under a 12hr load, your fine.

Safe yes, reccomended, no.  95* is where the chip throttles.

I was spiking 85* under prime, (on air, pre-liquid) but only hitting 60's under gaming.

I'd say it's usable, I don't like getting chips over 80c for a long time, but considering its running P95, I think you should be able to survive. As far as laptops can get higher temps than desktops, yes laptops generally run hotter, but they are not any more resilient to it than desktops...