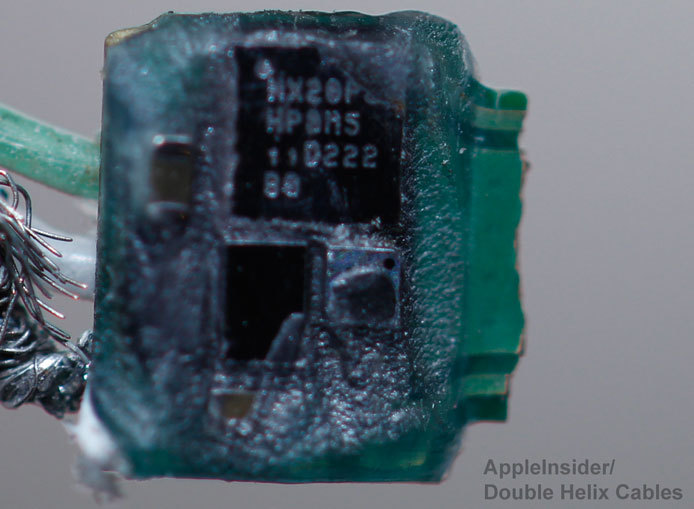 Ok apple, this is a new low for you... and im sad i am writing this. i never join in on the apple vs android flame war, i believe that someone should just choose what phone they like the most and go on with their lives, but this is SO bad that it has to be brought up.

apple is so concerned about staying inside of their little box, they are making the experience for the user bad. first they remove google maps and use their own shitty app. google that if you havent heard of it yet, but its a fail. a very funny fail.

second, and the main reason of this post, apple is now embedding authentication chips inside of their lightning connector (seen above). this is to hinder other manufacturers from making cables so you will be forced to buy apples cable. not to mention that this little chip brings the price up to a little over 3 dollars, and at apples inflation, that will be painful to your pocket if you loose your cable.

so far, the iphone is a joke.... they used androdized aluminum to make the casing thicker than it should be, which makes it very easy to scratch. the maps are so bad you might as well go back to a paper map, and now the cables are propriatized. apehl, what are you doing? apehl, stahp!

Went from 3GS to Samsung Captivate, never even considered going back. Apple needs a kick in the teeth.

Holy hell, and Thunderbolt seems to have an interesting place in the film/cinema community, though, I doubt it'll replace SDI any time soon.  And what Scraps said, very true, I've had my SGS (TMO Vibrant) since release, reason being, I had a BB, I was unhappy with said BB, well, the OS, and the lack of features, good KB, great speaker/handset features, everything else bleh.  Back to SGS, got it because it was the only phone on the market with a huge, bright, crisp screen, still, Samsung's phones have the best screens.  I have a friend who had a 3G, he couldn't stand it, got it free, his fathers plan had 2 or 3 free iPhones.  He's using a Win7 phone, and loves the hell out of it, said he would never go back to locked bullshit like he had with Apple.

I honestly cannot tell if this is a real commerical, or a troll commerical, because either way, it's fucking hysterical.

"We've made it smaller by a few milimeters; wider by half an inch, and used different glass for our camera. It'll cost $300, for something that should have been done with the second generation"

Seems real, googled a few of those names, and they are 100% legit, but holy hell, that commercial is just Apple cock slapping it's fan base, and they seem to enjoy it.

It being real makes it so much worse.

DRM Cables... Oh man. I tablefaced a hole in my table

"the new cable is all digital"

The computer cable had only digital signals but the connector had support for some analog and that's why you can't see your playlist or anything anymore in those expensive BMWs with the apple dock.

Yea...trying to bash my head against the keyboard to make sense.  It still does VGA for fucks sake, they have a "lighting" cable adapter to VGA, AND IT HAS NO FUCKING HARDWARE IN IT.  And then look at the old one, it had a similar idea...damn all the dieties, Apple, stop fucking around.

Who cares, maybe they will piss off their fans enough that they start losing some. It would be a great day.

I personally love that they dicked over a lot of fans by changing the adapter, sure they sell an adapter, but how well does it work with existing peripherals.

This is an example of Apple "telling" their consumers or fanboys to buy their new products and dump off old ones. This will make the environment much more complicated.

Oh they sell an adaptor, not included in box and it's $30

I'm aware of that, just saying, how well will it play with current iCrap products, that's the ultimate question :)