I just got Sonic Mania. Unfortuanatly the PC version installs the spyware Denuvo, so I did not get that version. The plus side of the PS4 is that it can plug into my CRT that I used to play Genesis on: 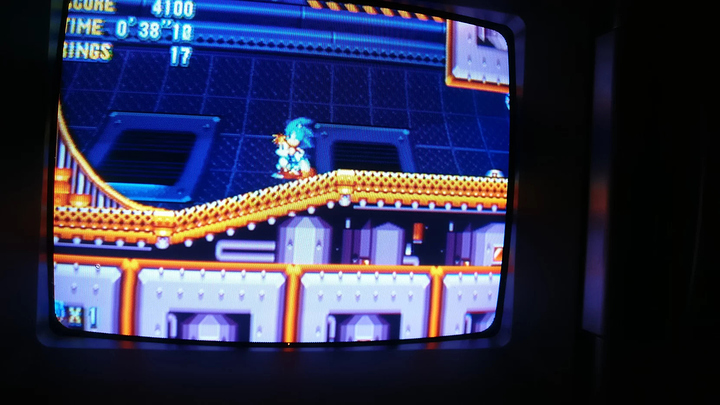 It is really great, possibly the best Sonic game since Sonic CD.

What I found interesting is the low quality 3d effects and bonus level they put in made it seem like a Sonic Saturn game they never made.

It is a very decent platformer. If they ever release it on PC without Denuvo I will have to get it there too, for mods.

I heard nothing but great things about the game and I probably may try it out if they can somehow remove Denuvo from the PC version. Would like to try out a 2D Sonic game.

How? What output is your CRT? Are you using convertors for the video signal?

Evidence for that claim? I dislike Denuvo or any DRM as much as the next guy but I do not like to claim something that it may not be like how it destroys SSDs when it does not.

I had to use a HDMI to RCA converter box, but it works quite well. For some reason it has trouble with my PC if I try to use it at anything other than 1080p though.

I prefer to be able to play my retro Sonic game unencumbered. It was always online garbage at launch, and it still tries to contact authentication servers while playing the game. It really pisses me off that what is basically a 16-bit indie title (made by small indie dev team), has AAA level garbage DRM. It is just not a business practice I want to support.

I have the collectors edition for PC coming.

Huge shame to hear about Denuvo in the PC version. I hate that shit. I hope it does not stop something this graphically simple running at full speed, at least 60fps.

Good to see a full PCGamingWiki page filled out for it all ready.

its goty material, sonic mania is what sega needs to do from now on with the franchise, forget all the 3d failures

In my opinion, what made the game so good is that the people making it are basically Sonic superfans; they know what makes Sonic good and they clearly put as much love as possible into this game. I feel like if they had more people like that on the other Sonic teams, the quality would improve. In contrast, almost all the games since Sonic 06 seemed like they wanted to shit all over the series legacy. Even the 2D perspective sonic 4 was very mediocre.

Denuvo is defeated for this game too now. It lasted 8 days.

Note to mods: There is no piracy in the link only news.

So with this in mind what should happen now is Sega should remove Denuvo in an update, the reality is that unfortunately that is very unlikely to happen. But at least now people who are in the situation where they will be without an internet connection of extended periods will still be able to play their legally bought single player game. It is disgusting when they force an internet connection to be needed regularly for a single player game, but at least there is a solution now.

News to follow if anything happens in regard to full removal but I doubt it.

Fuck yeah! I got it for the Switch simply because it’s a perfect game to travel with.

I am having stupid amounts of fun playing this, it is everything a Sonic game should be, should have been and hopefully will continue to be.

If you were a fan of the original Mega Drive/Genesis Sonic 1, 2, 3, &K, this is all of that faithfully reproduced and expanded. No new era game easy mode nonsense, it is still old game hard, it will kick your ass repeatedly. The graphics hare not needlessly smoothed, they are square and jagged like the originals, the colours are vibrant, the sounds are synthetic and the speed is FAST! Everything about this is just, right!

I cannot stress it enough, they made a good, no, GREAT Sonic again. It is worth ever cent and second invested in it.

Fear not for the Denuvo, with ti it does not impede the performance of the game, and if you are going to be playing it exclusively offline like it should allow from the start then crack it after you buy it.