Anyone have any experience with this thermal electric cooler? 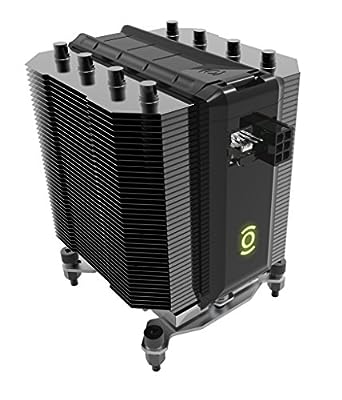 HEX 2.0 is a Smart CPU cooler that delivers exceptional on-demand cooling performance and thermal control to meet your computing and gaming needs. The HEX 2.0 is comprised of a proprietary state-of-th ...

Page 9 [Final Thoughts]... Phononic's HEX 2.0 CPU cooler goes under the chopping block today. But it sports one major difference to most; it uses thermoelectric technology.

Looks ok but AIOs do the same thing for less money.

Are peltiers still a thing?

Well it’s more efficient at thermal transfers than water cooling. And the only downside is that you gotta keep the room it is in clean of dust and have a dehumidifier. But I hear that doing that can score extra points with ladays.

I think this cooler is really good. It also has a base plate that is compatible with ryzen.

I think this cooler is really good.

I mean think what you want but testing shows that it isn’t. The performance, especially under high heat loads (also I mean not really that high 100W, pretty average stuff), is pretty poor. It is also loud, very expensive and consumes a lot of power itself in addition to being complicated and less reliable than an air cooler.

Forget about this thing. The peltier water cooled mods look to be more efficient at heat transfer. It seems that peltier air coolers are just a bad design in general.

Peltiers in general are a bit iffy. Water or air it doesn’t matter. Expensive and complicated for very little benefit

A big noctua would be cheaper, perform better and more reliable.

I got really excited about seeing this item on amazon with all the reviews and thought that peltier cooling had come a long way. But looked at some forums and it just seems that it only cools at load. But just keeping the cpu cool at idle at ambient temperature. MADNESS!

You are better off getting a water cooling kit and adding your own peltier later on.

Are you saying the peltier is comparable to the low profile cooler? Or the nhd-15?

Performance wise? It is about the same as a low profile/small form factor cooler yes. Slightly better. It isn’t anywhere close a big air cooler especially as wattage increases

Wut? No. This thing will always keep the cpu cool at slightly above ambient. The moment it goes below ambient temps, you run the risk of condensation.

The other reason why these things are basically dead is because overclocking is not temperature bound anymore.

It used to be that cpus would keep overclocking if you threw more volts at it, so you had to have a really good cooler. The better cooler you had, the more volts you could throw at the cpu, and the harder you could push it.

In modern times, the stock frequency is already so high that there isn’t much room for overclocking to begin with. Ryzen chips really don’t overclock past 4.1 ghz. A few really lucky people can hit 4.3ghz. It doesn’t matter how many volts you throw into the cpu, it will hit those overclocking frequencies and stop.

In both of those cases, you just need a beefy cpu cooler to keep those chips cool at those frequencies. We don’t need exotic cooling in order to hit the max overclocking potential.

The only exception might very well be AMD thread ripper, and these new intel 10+ core cpus.

The only exception might very well be AMD thread ripper, and these new intel 10+ core cpus.

Even then not really. Traditional water cooling loops do a plenty good job. The biggest issues with the Intel parts is their shitty TIM. That is the limiting factor.

Wut? No. This thing will always keep the cpu cool at slightly above ambient. The moment it goes below ambient temps, you run the risk of condensation.

I think he was a bit confused. The cooler doesn’t turn on the TEC part until load to avoid condensation. On idle it just acts like a normal heat sink. I think that is what he was getting at

So within margin of error?

Either way tec is silly for this application, even if you had one big enough to cool a cpu it would need an heatsink capable of cooling the hotside making the whole venture a waste

I always wonder why they don´t use TEG (Thermo electric generators) in these coolers. It would allow to use some of the heat the CPU gives of to power some LEDs or even the cooling fan.

It’s much cheaper and easier to draw .13 amp from the psu