Any Recommended Ethernet Brands for 400Ft?

I’m not knowledgeable with network by any means and i have just moved into a old 1800s house with my home office being in the attic around 400ish ft away from the main router, and looking to get Ethernet up-here to my office to a switch and my Desktop since at the moment running USB Tether on my phone and getting 1mbps where as i should be getting 400mbps from my ISP (what i get with Ethernet connected in the same room as the router) and im wondering what brands i should look for or avoid when looking for cable, im planning to run it outside of the house and since i live in a coastal area its very windy and rains a lot so should i also perhaps shield the cable from the elements?

400 ft is going to be on the limits of reliability for wired Ethernet, even if you get decent Cat6 STP. In my experience it should work, but is not guaranteed.
edit: If you have a place for a switch in the middle, you could always use two lengths of Cat6 - that might be simplest, then should be in the realm of reliability for any equipment.

You could play it safe and go for multimode optical fiber, using 1000BASE-SX transceivers - which have a limit of 220m and you can find reasonably-priced gear for thesedays. 100m of OM3 multimode cable with LC duplex connectors is €71,39 from fs.com

You can get Intel PRO/1000 PF (EXPI9400PF) with a 1000BASE-SX SFP transceiver quite cheaply second-hand for your PC (or a PRO/1000 MF for older PCs). If you have a switch with SFP port you can just drop in a SFP transceiver with LC fiber connector.

If you don’t have SFP ports, there are some very cheap older switches with multiple SFP ports you can get for second-hand, or you could get something like a Netgear GS110TP, or a media convertor like the TP-LINK MC220L

If you want to future-proof, you could lay OS2 fiber instead (would need 1000BASE-LX transceivers then), then you’re ready for 100 Gigabit, just drop in 100GBASE-LR4 QSFP28 modules in the future, same LC connector!

At those distances, wont wireless make more sense to be saner in its setup?

Multiple wifi repeaters/mesh? Sure there won’t be any rebar faraday cages in that old 1800s house to contend with, but if the only requirement is to get network from point A to point B, I’d take the wire for the cost, simplicity, reliability and performance.

ah mesh has also been on my mind but thought it maybe worse, this maybe the option then to try thanks guys!

Hm this seems pretty interesting! my system is a X299 machine so it should be fine for the EXPI9400PF right? and my switch has SFP so this maybe the way to go since i was thinking of making a homelab soon so may just make things more easier in the long run, ive just bought the google mesh from amazon too so if it isnt as it seems i will return it and then try your idea since it seems like a good idea and would give me something to do for the weekend.

Either have an switch in the middle or use an RJ45 to SFP converter on each end, then run fibre between them. 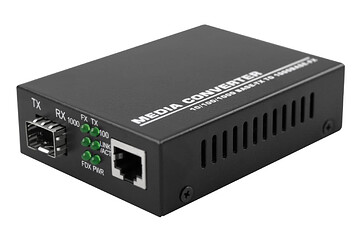 my system is a X299 machine so it should be fine for the EXPI9400PF right?

Yep should be fine, those cards will run in an open-ended x1 lane slot also. I’ve run them on old Pentium 4’s even. They’re the PCIe version of the older MF-series PRO/1000 cards. Can be had second-hand for cheap prices now, I see one at $20 on a certain auction site.

I used to work in the Low Voltage industry. Cat-6E can go about 380’ and still pass the meter test, any more than that and it will still work but your speed will decrease because of resistance/loss.

That would work but it can be expensive. You can use a range extender on CAT-6E as well. Ive done 900’ runs doing this when putting cameras in remote areas. Anything more than that and I would consider fiber. But then again, the average consumer probably wouldn’t need those kinds of distances.

Also, if it will be exposed on the outside of the house, I would run 1/2" electrical PVC pipe with riser cable. If you don’t want to go that route you can get underground CAT-6E that has a thicker jacket and is made for outdoor use and mount that to your house. Looks kinda jank without pipework, but it is an option!

As for brand, CommScope has always done me well. Never had any issues with quality control from them.

If you are set on going with cable, Tom has a video on “GameChanger” CAT-6, which you might find of interest: 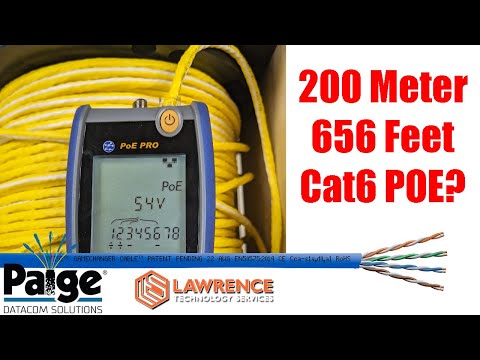 If you only need gigabit and really want to use copper, you could get an active repeater MikroTik Routers and Wireless - Products: GPeR … and use it with a standard POE switch.

… alternatively, fs.com sells cheap SFP+ modules and cheap preterminated fiber, and there’s plenty of switches and routers and NICs out there with SFP/SFP+ ports.
… the benefit of going with e.g. single mode or multimode fiber is you could potentially have 25/40Gbps even today for not too much money.

quick update friend gave me a 450ft ethernet i chucked down the staircase and it just about reaches my Router in the living room, its not tidy or good lucking but hey it works (for now) but ive lost basically 1/2 of my speed, in the living room with the desktop plugged into it i get 460mbps and when in my attic (where my home office is) im getting just under 220mbps, its not bad by anymeans and alot cheaper than getting the fibre wires but the SFP idea xzpfzxds brought up is still going to happen in the summer when i can get outside the house on a ladder and avoid this current windy and wet days im having atm.

As you can see here is the black ethernet cable thats going down the top of the staircase to the bottom, its not pretty as i said before but it works. 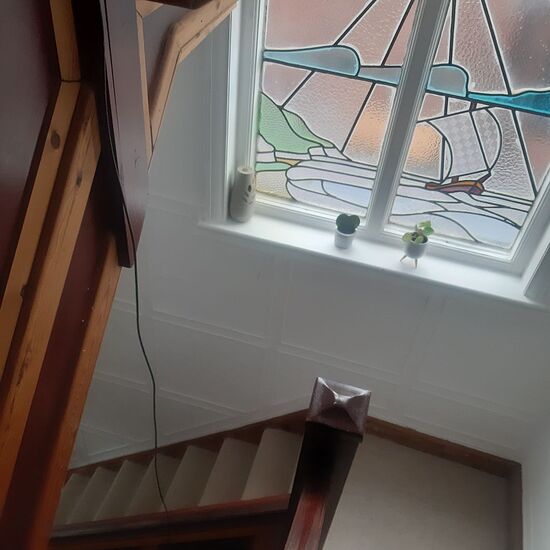 450ft is well over the 328ft limit so the 240Mbps bandwidth loss is probably from packet loss.