Any good brands for server racks?

I’m trying to build a server focused on being quiet. There are a few quiet server rack brands, but those are prohibitively expensive. Think it might be possible to keep the chassis relatively quiet. Not necessarily water cooling quiet, but definitely air cooling quiet.

I’m going to have to replace a ton of fans, and probably add a cooling unit after every component. I did a little back of the envelope math, and I need at least a 15U chasis. An 18U would probably be ideal. I do need 26 inches of depth to fit a 45 drives bay too. Anyone know which brands I should be looking for?

Found StarTech. They look interesting and are not too expensive. Even have an affordable silent case. But, it’s too small.

The most important issue in noise reduction is preventing noise to begin with. Small fans (especially the 40mm ones found in servers) make a ton of noise, so choosing server chassis/cases with bigger fans is really beneficial here. So, out go the 1U blade servers, get at least 2U or better 4 or 5U cases, with 120/140mm Noctua fans.

I happen to have a pair of 1U switches and am considering a funnel-like contraption with a large® fan to blow fresh air into the openings of the very loud 40mm fans. After removing said fans, of course

In a rack system one could do so while utilizing the open space behind the switches and sacrifice a 1U slot to bring in fresh air from the front to the back of the device.

The most important issue in noise reduction is preventing noise to begin with. Small fans (especially the 40mm ones found in servers) make a ton of noise

Yeah agreed, and I think I said something similar on your earlier thread about swtiches @Zerophase.

I have never see a “quiet” rack that was actually quiet with screaming 1U servers in it. I think it would only be possible if the rack was completely enclosed with an active cooling unit (basically a small air conditioner). I’ve never worked with one but I know they’re pretty expensive and as with any air conditioner, you’d need to find a way for it to exhaust hot air outside.

Assuming you’re going with the Q30 from 45drives, you aren’t going to have a noise problem there. Is it the switch(es) that you’re worried about?

I’m guessing just not being in the same room with it isn’t an option?

I still think buying a used SuperMicro rack case is the way to go and then put some effort into upgrading to quiet fans, and QS PSU’s.

Their cases are some of the best out there and you can buy all sorts of parts off ebay which will let you upgrade over the years without needing to replace the case. 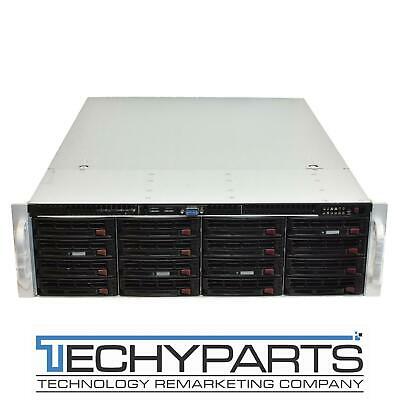 APC makes some nice racks, we have two here at the job, very sturdy construction and big airflow path.

It is a steel rack. Make sure it has warranty and it rated for the load you intend to put inside of it. Racks have a weight limit, DO NOT EXCEED.

Other than that, everything is cosmetic or sound dampening related.

Used racks are by far cheaper and usually load rated higher as they come from DCs where they care about not exceeding specified load limits.

Some of the no-name racks on Amazon are only rated for a few hundred lbs. You can spend an extra $100 and get a half ton of extra capacity.

Also, make sure your floor can handle the load you put in your rack as well. Residential floors were not designed for a 44U rack sitting full in the corner.

I just want to lock it so no one screws with anything. Think I’ll go with Startech, and just replace the fans. I’ll do the same on the switch.

Decided to go with this. Think I’ll just make or buy a fan stand with a bunch of Noctua 120mm fans, and glue it to the back.

If I may ask a somewhat related question, is there any 4u rack case that has 120mm fans at the back? All I see are dual 80mm fans.

Should I even populate those if I plan to get 2-3 120mm fans in front? 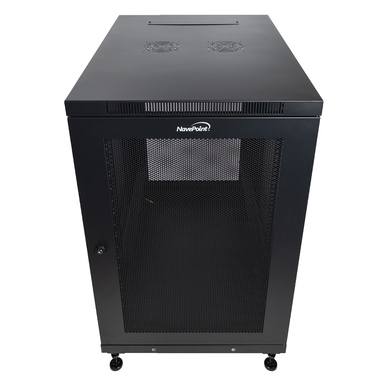 Open racks are much cheaper, still.

If I may ask a somewhat related question, is there any 4u rack case that has 120mm fans at the back? All I see are dual 80mm fans.

Should I even populate those if I plan to get 2-3 120mm fans in front?

I got an Inter-Tech IPC 4U-4129-N and replaced all the fans with Noctua ones even the two 80mm and it sounds mostly fine. I recon it doesn’t really need it if the other fans have enough flow through.

for the rack itself I got some HP branded 42U rack that was missing a side panel and cost as much to ship as the rack itself. I love the solid metal frame, but that shit isn’t convenient to get up to the 2nd floor.

I’ve ordered my rack on Amazon. Would not really recommend doing that. If possible I’d find some shop where you can pick it up and they are responsible for shipping it in one piece to their shop and dealing with returns.

I got two partially broken racks and frankensteined together one from both. The rest I sent back. Which was easier said than done. It had nearly no packaging to begin with. The regular mail would not take it because it’s ‘too heavy’ so I had to send it with UPS which was like 100€. You don’t really get the refund if you don’t send it back and they don’t seem to cover shipping for such items. Not sure if amazon or the seller on amazon is responsible for that.

The rack is ‘ok’ I guess. For my purposes it works out. It’s some digitus wall mount rack. I did not plan to mount it to the wall, but it seems to get its stability from wall mounting. Without bolting it into the wall the door would not close without lifting it. So even though it’s on a little shelf I still had to wall mount it to give it some stability. So honestly would not recommend that one either.