Any Body Here Knows How To Play The Guitar

Lol I'm right there with you. I used to play a lot (never in any actual bands) but now my stuff just collects dust and I really only play my classical acoustic these days. I still really like to look at nice custom equipment though :)

If you are that talented you shouldnt stop enjoy playing basicly.
I wish i could play guitar, because i like those instruments,
but i guess i dont have the talent for it.

Just do it lol try playing you never know!

I tried a littlebit, can do some simple stuff.
But i´m not too talented for it.

nah < find theres a point where once hit a certain skill level one becomes substantially more dissuaded from continuing when all they hear all the time are hacks nd shit.

if you play fast say, there's a certain physicality to it to be able to play like slayer 1.5-2x speed for 1-4hrs, you get to a point where it takes 30-60min of just rippin just to warm up where you can actually fully play finally loosened up and then you gotta play like an hour after that of just hammering down, can wear a fender heavy pick into an oval in a single session just to try to maintain playing shape. to the reality that never gonna go anywhere or do anything, and then to have people ask you the equivalent if you think that guy from nickel back is pretty sweet

Anyone can learn. Just need to find the right teaching aid. I still think going old school with face to face lessons is the way to go. If you are interested, you should look for a teacher near you. There are some good online video tutorials as well though.

Some more threads on learning here if you are interested:
https://forum.level1techs.com/t/i-want-to-learn-guitar-or-bass-where-do-i-start/103639

I have used the M-Audio Fast Track, the Focusrite Scarlett solo and the Digidesign/Focusrite/Mbox aborted child Mbox MK1 (that works only on windows XP and MAC OS X) they are pretty much on par when it comes to latency, clarity and cab sim capabilities (Assuming that you run on something that has at least 4 decent cores, 4 gig of ram and Solid media). AKA EVEYRONE OF THE HAD BUGS Still.I find having an interface connected to a powerful cronw PA, much much more versatile than having some line 6 or peavey cabsim thingy because pc, laptop, MIDI, Condenser micing amps, V A P O R W A V E duh etc.

I want to experiment with firewire and see if I can overcome those dem usb 2.0 interface limitations (maybe a presonus firepod or a motu 828) as I need to also record drums but I dont want to spend 500-1000 on a shinny new focusrite 32bit usb c thingy (Firewire interfaces can be "trifted" an picked from the trash easily so there you have it, also those dem bogus USB 2.0 interfaces. Mboxes and maudios are almost on every thrift shop. )

Or get an Axe Fx/Kemper

Wow. Man. I have a boner...Pretty nice setup.

Wanna trade something for a Logitech G27? :angelemoji: willing to blow the dust on that rig no problemo

the repsonses here made me blush :)

reason i'm not getting rid of any guitar gear i have is that the lefty jag with humbuckers and bound neck is pretty hard to come by.
The lefty mustang is a 69 reissue japanese one, also not eay to find lefty mustangs in belgium

the orange rocker 30 is not in production anymore. There's 'better' orange amps yes, but the rocker suits my tastes perfectly in combination with that ampeg svt 410 cab (4x 10" speakers).
It's quite an odd setup you either like or don't.

Another one i'll never get rid of is a dwarfcraft great destroyer the 2nd one ever made. (i two, the other one is the 'official' production version)

I've other amps and guitars (i have a 70's hondo II sg style with dearmond pickups) that works better for certain things.
Basically the stuff i've acquired over the years of making music reached the point where i was statisfied with what i have.

crossfire almost finished. Want to tidy up those cables more. And the hue plus went into bitch mode again. Replugging those usb headers again tomorrow, that usually fixes it. Too tired to open it up again now. 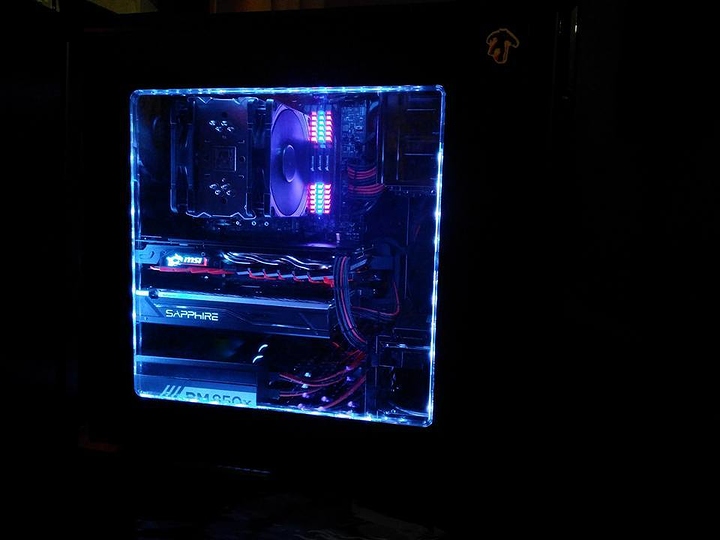 Anyone can play fast... most play fast without playing fast, it's mostly smoke and mirrors. Players that actually play fast and actually play each note are rare and are amazing, but they will be the first to tell you that playing fast doesn't do that much for the performance, except if you're playing for an audience of guitarists.

It's much more important to learn how to play with expression, because at that point, you can tell a story with your playing, convey a feeling to the audience. Buddy Guy said that he needed only to play one note to make a person cry. He was a direct influence to the Gods of modern electrical guitar, Jimi Hendrix, Eric Clapton, Jimmy Paige, Peter Green, etc..., not because he can play so fast, but because he really means to play what he plays, each note is intentional.

Standard scale length and concert tuned electrical guitars are physical to play, especially instruments with a fretboard radius that allows for the strings to be close enough to each other for certain styles but at the same time allow for the strings to be widely spaced enough for certain expressive techniques. I would post a picture of the fingertips of my left hand after almost two decades of regular electric guitar playing, but it would gross most of you out, because those fingertips are dead, they are insensitive and bare the scars of torture upon torture with steel wires. That is what standard scale length, standard concert tuning, standard 10-46 to 12-52 gauge steel strings will do to your fingers if you really want to express something with your playing.

Also, 90% of what you play as an electric guitarist is accompaniment, rhythm guitar, it's percussing on a stringed instrument, it's like Marimba basically. 90 % of the remaining 10 % is work, is session in a style that is not really your own, is interpretation of someone else's thoughts and feelings. The remaining 1 % is actual personal expression, and that part may never be heard by anyone but yourself. Now here's the thing: 99% of all electric guitar players never succeed in that 1 % of actual personal expression. Which doesn't mean one can't have fun playing the electric guitar, but there is a big difference between playing "Salonfähig" or "Pour épater les bourgeois" and playing in such a way that people actually come out to listen to you play because they feel something.

and playing with expression does nothing except for an audience of guitarist, no one in general cares at all about talent/skill basically see pop music in general.

wasnt saying fast is the only thing thats good was saying its more physically demanding and requires a certain level of commitment that say being able to do some picking dynamics stuff maybe even some staccato or a portamento kind of thing, a vibrato and assisted bends. other than trying to bend say high e all the way up to the d string or something doesnt really require that much dexterity/finger strength. being able to do the generic string of 3-5 notes and then slower deep vibrato people find 'soulful' doesnt require you be in shape like a sprinter or weight lifter which is like if you wanted to play riff x as fast as you possibly ever could then you have to be in shape could even do hand exercises source equipment, wrist/finger weights etc. is different when your talking remembering how something feels or how to do a specific thing, versus having to ask if you could even possibly pick fast enough to do something

Yeah I'm still around. Still getting used to the split and the forums. Hopefully I can get settled here again soon.