What does TS think about the Animatronics master and his team who created the Robot Stripper? This art project questions the degree and range machinery can invoke human emotional responses: 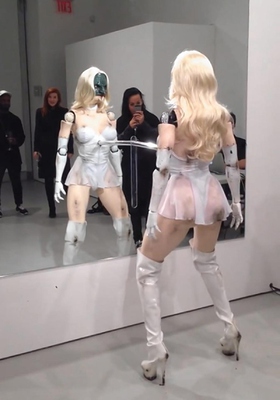 I'm still trying to figure out why you would build this is and this is art ?

that mask is perfect

Come on, if you're pro flying spaghetti monster you can't say this isn't art...

Ok you got me there fair enough. XD

Why? It’s the perfect way to advertise your abilities as an animatronics builder.
In the renaissance, paint was the prevailing medium. Today, its technology.
Art is defined as any new experience or medium that makes you question previous notions of reality or to invoke a novel emotional reaction.

what is comming out of it's chest?

I wonder where they got the Mask from.

well, guess this is one job people will always be better than people at.

Interesting art to say the least.

It's resemblance to a human is uncanny!

I'm still trying to decide which android to choose.  It's the year 2032, and I can order any bot from entertainment history (with an authentic, albeit harmless, persona) plus a large selection of celebrity look-alikes.

I want something that's as physically capable as a human, but not sentient, and not networked.  Some hacker turning my bot against me would not be too nice after all.

I think I'll take a C3PO, and a random slutbot.  '3PO will take offence at everything, and I will be amused.  Good times.