Ancient Aliens Debunked is a 3 hour refutation of the theories proposed on the History Channel series Ancient Aliens. It is essentially a point by point critique of the “ancient astronaut theory” which has been proposed by people like Erich von Däniken and Zecharia Sitchin as well as many others. 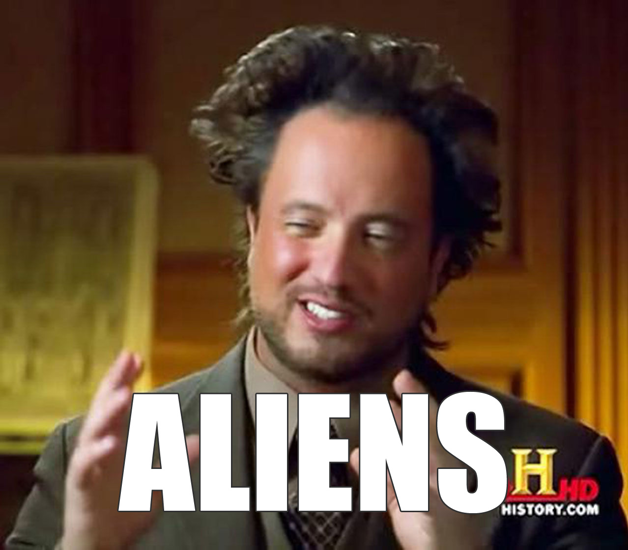 I'm in for watching this... where can I get it?

The thing that bothers me about the whole ancient aliens thing it that it really downplays humanity's accomplishments. Trolls of the highest order. I just know that if our ancient ancestors were to watch this program, they'd be pretty damn pissed off to see their (or their slave's) hard work and ingenuity were being attributed to imaginary beings.

And I never trust guys with stupid haircuts.

Ancient alien advocates are imbeciles. The whole thing is ironic. They're using imagination to come up with this theory. Which is exactly what allowed humans to build all that stuff in the first place. That and good old fashioned human ingenuity. But that works in tandem with imagination.

then again, the ancients worshipped aliens, gods and the sun so without idol worship and messiah complexes the world would not have moved in the direction it did.

but yea, in the end its the human ingenuity that got thinks moving and continues to do so :)

They're using imagination to come up with this theory.

They use old sci fi books from psychopaths , palm readers ( Helena Blavatsky Charles Fort etc ) and they are an insult to people who studied this matters for years and to some the work of a life time , the history channel should be ashamed of passing it there .

There's a lot that History Channel should be ashamed of. It's become a channel for idiots and the Ferengi.

He came out and admitted publicly that he pulled the whole thing right out of the lowest part of his back years ago. How can something that calls itself "the history channel" continue to brew soup on that stone?

Finished watching it. Some good stuff but towards the end the narrator starts to imply that bible contains accounts of historical events. Which kinda made me sad.

He did no such thing , he referred to it , maybe is better if you read that part .

My nephew made a turd out of brown clay one time. There's no way he could have made it alone.....