dream-seller seems to have just posted the next A409U, what do you guys think?

I'll probably be paying a visit to the bank tomorrow and buying one unless I can find a very good reason not to.

More HDMI 2.0 ports means different board. Wonder if the difference is anything noteworthy or just a slight difference.

In the differences it only says "USB 2.0" instead of "USB(Firm Only)". I assume it would say something else if it was a USB hub but hopefully we can still do firmware shenanigans with it?

Part of me is worried that It'll be gone by the time I make it to the bank tomorrow. I might just do some reckless savings diving tonight just to secure the purchase

Listen, I do not have a crystal ball, but the track record is there, and quite one of the best ! dreamSeller is reputable; so...........take while available.
For me the first productions were the best. (IMO)

I just did it.

If there's anything wrong with it, it's all your fault.

Damnit, you buying one just raised the price up to $629

What the heck, well maybe making an impulse was the right decision? I guess I'll see when I get it.

It's supposed to arrive shortly after the beginning of February, I'll be making another thread here of my impressions and observations of it once I get it.

Bit the bullet, thanks for the share I was looking for a Sub $700 4k monitor deal with DP!

What about connecting laptops? Is this a mac thing or what? I have peripheral computers (laptop) and mediacenter all running hdmi. Does this mean I can't use the display for these whenever I need to work with them (I know - resolution will suck - but nevertheless). What about PIP if it comes from a laptop? Same specs I've seen on other monitors as well..

No pixel perfect yet?

First, we must understand translation and the technology we have here. To get 4k60 to work you need a HDMI 2.0 or DP1.2 output, many non-pro laptops don't have these so it is just a disclaimer for their return policy.

Ok - I guess I got lost in translation :)
You mean that it refers to 60Hz 4K only, which makes sense. I just got worried you couldn't run the display in 1920*1080 which is pretty much the highest we'll be able to use with laptops and internal gpu...
I've had one quirky display many years ago not being able to show the boot or bios, got worried it was one of those issues...

Aight, long time lurker here, but decided to get one of these as well. Fingers crossed. I'll post back again when it arrives, try to give a review.

*Edit: Just a heads up, I decided to try to 'make an offer', and offered the original $609 instead of the $629 and he accepted. Worked for me, might for someone else trying to get one.

So, I bit the bullet today and also made a 'best offer' to the guys at Dream-Seller on eBay.

Bit of back and forth and grabbed one for 610 bucks mark which makes me very happy.

I will obviously update you all once it arrives.

Some minor spec change to the original version so am hoping to check all when it lands. Let's see if the post system works fast... 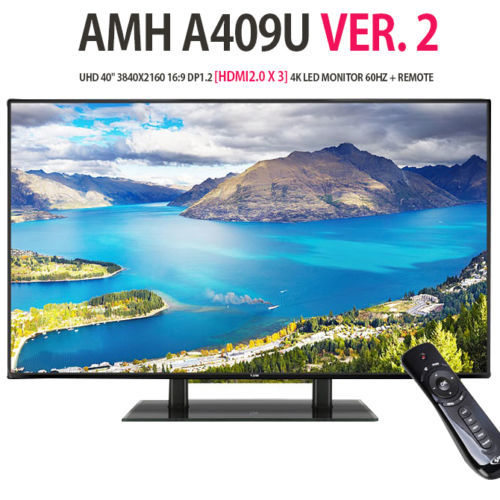 Hoping to get it up on a vesa arm to make some space on the desk when it comes.

Might not need one, the 40 s are still relatively easy to place adequately !
edit 1 = seems the only thing missing is the split screen, (hardly ever used mine, rather have 3 or 4 displays) and the addition of HDMI 2 ports.

I think I can make it work with the stand it comes with on my desk. I'm not going to have room for both my 1080p monitors with it there though. I'm thinking about grabbing a full motion wall mount for one of my 1080p screens and mounting it above my other one to the side.

As for the shipping, I bought mine on the 21st and I still haven't seen an email saying it has been shipped which is a bit concerning. It's still estimating delivery Tue. 2 Feb. - Tue. 9 Feb. though. I'm super excited to get this thing.

Just wanted to update where my monitor is at right now. I just got a notification saying that my monitor has been shipped. The estimated delivery has been switched to "Varied" but I'm optimistic and hoping to see it late next week.