I was Typing a paper for school and out of the blue this giant black bar appears on my amh a409u. it isn't display-port. the on screen menus appear behind the black bar, meaning Its a problem with the display. 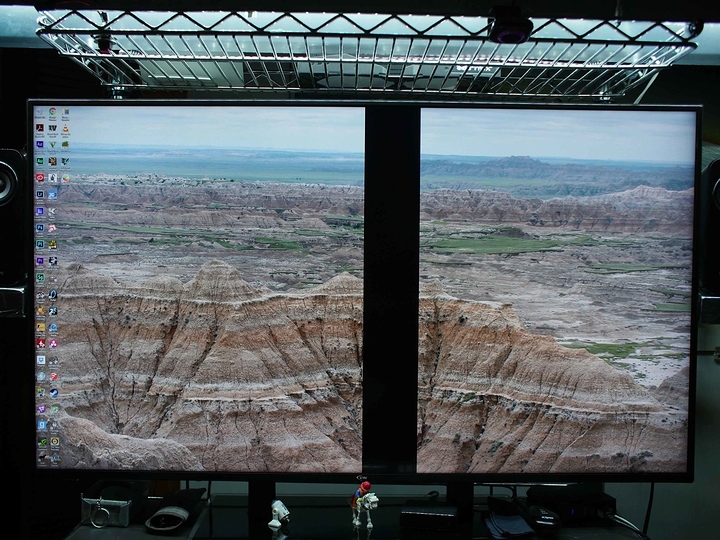 P1090074c.jpg1887x1416 561 KB
Leads me to believe it to be a connection issue between the microboard controller and the lcd panel. I don't want to take it apart if i can't fix it. does it look like the type of problem with a monitor blowing capacitors? I have soldering experience and can replace capacitors, but i don't want to void the warranty if i cannot resolve the problem myself. additionally would there be a firmware upgrade option that could possibly fix it?
Stanli January 18, 2016, 11:07pm #2

The capacitors that fail on monitors so often are electrolitic caps in the power supply, which results in the device not turning on at all.
I don't have any "real" experience with monitor repair, but my guess is that the driver for that segment of the display is not working properly. I wouldn't attempt to fix it myself if the device is under warranty and just get it swapped.

I doubt it is a firmware issue if it was working before.

It could also be that part of the flat flex cable that connects to that segment of the display has a shoddy connection. If so, you ain't going to be fixing that unless you have an extremely steady hand and an extremely tiny soldering iron.

Yeah, it's either the cable is disconnected. Also, you might have just blown part of the power "conditioning" (using this word because I don't know the correct term). Many times entire segments are wired to the same caps/resistors in series, so if 1 dies the entire section dies.

There's not going to be much to fix that without opening her up.

Eev blog once took such a monitor apart. Was a dumbsterdive .

You can look there for inspiration.

Ehm what else to say, i wish you the best with that thing and hope that mine doesent do the same

Hi ! did nt someone else have a similar problem ? I do not remember were that lead off to !!!
I would tend to believe in a flat connector failure. Wendell indicated that often these connectors are not soldered but glued or snap pressed.
Check warranty status and what seller does for warranty support................i am not inclined to beleive a firmware upgrade would deal with this type of problem.
And to say I just wanted to indicate that all is great with the AMH s.
I would appreciate to know what is happening with your case.