I have been looking at the A399u for a while now, ever since Wendell reviewed it basically; so I finally took the plunge and ordered one, but then I became aware of the existence of the A409u.

I have since been in contact with dream-seller and he has given me the chance to pay the $30 price difference for the A409u, but I am not sure if I should. There are differences outside of just having improved connectivity.

Quoting Dream-Seller: "A409U has a different panel from A399U. This one is anti-glare panel and Innolux VA panel."

For a tech savvy person, I'll admit that I am not the most proficient with panel technology and I guess I'm looking to know if Innolux VA is considered a good panel type and would you take the a409u over the a399u given the chance?

Thanks for any replies. Would love to hear Wendell weigh in on this... 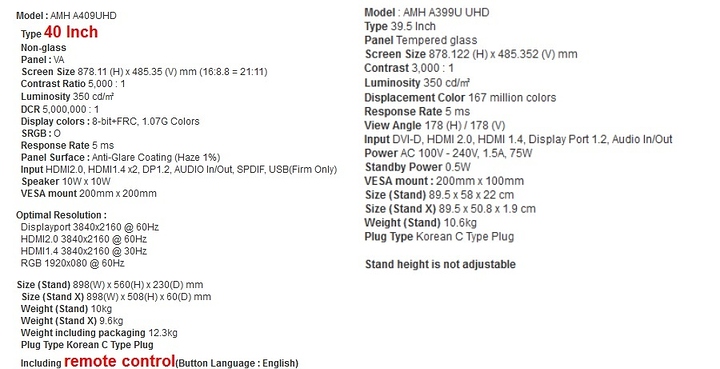 On paper at least, the new A409u looks to be better in many ways. It's difficult to comment on this specific panel without having seen it in person, but my experiences with Chimei Innolux have been good. Great contrast, good response time, decent viewing angles and colors. Could this be the mythical Chimei panel from Taiwan that Wendell was lusting after on The Tek a couple of months ago? If FreeSync support is confirmed, that would also be a huge bonus.

Nevertheless, if it were my money, I wouldn't jump on it just yet. I would wait for a few reviews to trickle in and see how forum comments go unless you are willing to guinea-pig a brand-new product, but that's just my preference. If I absolutely needed a monitor immediately, the A399U is a great choice, whose ins and outs are all known quantities, on sale for the frankly ridiculous price of 535 USD. Buy now or hold out just a leeeeetle longer for something better: the eternal dilemma.

Cheers for the feedback. I think I am likely going to commit to the 409u so that I can be that guinea pig :P

If anything I'll be able to get a good video out of it and if it turns out to not be an amazing monitor then I'll probably repurpose it as a 4k tele for somewhere else in the house.

Glad you're enjoying the content. Definitely look forward to making a video on this panel.

I have the A399U without the tempered glass, for $30 I'd get the new one for two reasons: 1) the remote is helpful because the buttons on the back are not intuitive and 2) the anti-glare coating. Even without the tempered glass, there is still a moderate amount of reflection, not bad in any way, but it can be much better. Interesting that the VA panels are different, I actually like the VA panel on the A399U but the addition of FRC to bump up the 8-bit panel to an effective 10-bit is also a nice bonus. To me it's a no-brainer for $30. One funny thing is that although one is a 40" and the other is a 39.5", they both have basically the same screen dimensions.

More power to you! It's brave souls such as yourself taking the risks who make everything easier for the rest of us. The only AMH product I've ever seen is the A399U, but if the A409U is anything like it, it should be terrific.

I look forward to the video! I have to say, this kind of content and discussion is exactly why I come to Tek Syndicate. Leave the Samsung and Dell reviews to the CNETs of the world; these crazy no-name imports are where the action is, and it seems like the excitement that Logan and Wendell are generating is being picked up by some of the more established publications and websites.

I agree and its great that this platform is spreading the word about lesser known products and hopefully putting some at ease about buying a Korean panel. I know there was a time when I was hesitant about it, but seeing the Tek guys speaking so highly put those concerns to rest.

Super excited to be one of the first to check out this monitor.

I'm ordering this screen tomorrow, I can also do a review on it if I get it quick enough.
I wonder what the shipping time to Australia is? anyone gotten expedited shipping to here, what was the time it got here? says 3-7 days on eBay listing.
Edit: Apparently people are getting them in 3 days flat in the USA, so I don't expect it to take long to AU.

I've already asked this at your youtube video but for some reason it has not appeared, so Im asking it again here:

Could you confirm if this panel has square pixels or not? Just make a big circle in paint and measure its height and width.

Edit: Or a square would be more appropriate btw :D

have you ordered one? if so, how long did it take to arrive? where abouts are you located?

im in perth, and ive just ordered one

I ordered it, within 1 day it was in sydney for 2 days, than in melbourne for 3 days before it got to me in adelaide... bloody customs in melbourne took aages. it took 1 day to get to australia from south korea.

do you want to cancel your order so I can sell you mine and get the B400? :P
basically same display but in my opinion looks better.