Hi guys, I'm wondering opinions of and if anyone has the Hisense 40K321UW screen

versus the AMH, it looks like the AMH is better at supporting true 4K for real computer use, as the Hisense only has HDMI in, no DP in...

It's currently $1KAUD in stores, but I can beat the price down to similar of the AMH which is currently $759AUD

funny, 100Hz sounds Chinese, they are working on a basis of 50Hz I believe, Check the new Changhong, they advertise 100Hz.
it stand out, compared to our most familiar 120Hz. (IMO)

hory crapu, dat input lag. this one supposedly has 6.2ms input lag.
I'll not piss off heaven and get AMH A399U.
was wondering opinion as saw in store and was like "ooh need comparison"
also Hisense is kinda cheap brand, wouldn't surprise me if it's chinese panel.
At least it's not as bad as Palsonic shudders or shudders again Soniq.
the DP is the main winner on the A399U at first glance, the review Wedell gave was quite excellent, with a little screw adjustment and deglassing, awesome monitor.. although logan says not to touch de LCD... so does that mean I can clean it with windex / alcohol if flies shit on it... o.o;

I have cleaned the panel with rubbing alcohol, methyl hydrate, with no ill effect, with a very soft cloth, non of their specialized cleaning clothes (Bullshit). finish the cleaning with a little Windex and wipe from left to right in large movements.
The A399U, as a monitor should, wakes up nearly immediately, not like others I have seen that take a full 6 second (like a tv).
Where are you situated ? If you need a recommendation for a seller, I have a very good one.
Cheers :-)
PS Hisense for me IS CHEAP, but then again I am using 2 Changhong 4K UHD and love them.....................for TV.

so with the AMH A339U, if I switch off left screen input in linux, and change input to windows VM using KVM (linux would use from Integrated graphics 1 x HDMI for left monitor (AMH A399U), 1 x DVI for right (23" Samsung), than when I turn on windows VM for gaming with GPU hardware passthrough, linux will switch off left monitor for linux, and when windows boots the GTX 970's DP output will turn on connected to AMH A399U. will the AMH automatically switch or do I have to switch it myself, and how quick does it switch inputs? as this is how I will be using it.

This is how I will be using it

OK, he re are a few very important factors to consider.
1- a selector for DP is definitely against my religion; too much bandwidth to be handled by any selecting device either electronic or mechanic.
2-Although the monitor has many inputs, it it does not imply to fill them all, they are there for versatility not for centralizing.
a few rigs implies a few monitors.
EACH DEVICE YOU HOOKUP TO THE A399U IS THEREFORE GROUNDED THROUGH THE SIGNAL CABLE FROM PC TO MONITOR, EACH ADDITIONAL DEVICE ADDS A GROUNDING CAPACITY IN CASE OF GROUND LOOP OR FLAW = PLAINLY THE MONITOR TAKES THE WHOLE BLOW AS WELL AS SOME OTHER COMPONENTS.
EDIT = personally I turn off the rig I am not using and boot the unit I want to use and let the auto select work rather than fiddle with the buttons each time.
edit 2= and all my components are ALL on the SAME GROUND. (absolutely no going around that)
edit 3 = you must consider the A399U as a piece of high tek, and handle as such; I do not know how to convey that idea. It is like a racing car, it requires attention and TLC. (IMO) yes of course that is me.
edit 4= nice setup ! :-)

this is not using separate physical PC's actually. this is using 1 PC, but windows is in a VM just for gaming, which uses hardware passthrough so linux is on integrated graphics from i7 4790K inbuilt intel, and the virtual machine uses the GTX 970. so when I switch off left monitor (the AMH A399U) in linux using VM startup script, it will also turn on the GTX 970 output to the AMH A399U, so it should hopefully switch between inputs on the display using auto selector. I'd keep the right screen using linux, left screen windows.
This is the same pc, not separate PC's so the ground plane is the exact same one.
Your grounding caution shouldn't matter in this case.
if you've watched that youtube video I linked, the left monitor turns off from linux, immediately boots the windows VM using secondard GPU output, and LCD's auto selector changed immediately to windows VM "PC".

how quick is the auto selector? does it just switch between active inputs?

I treat my technology very well, I pamper them with care. that's how my old i7 920 lasted 6 years, and so did my 24" screen that's being replaced with the AMH A399U as there's TERRIBLE lines through the screen!!.
take a look! 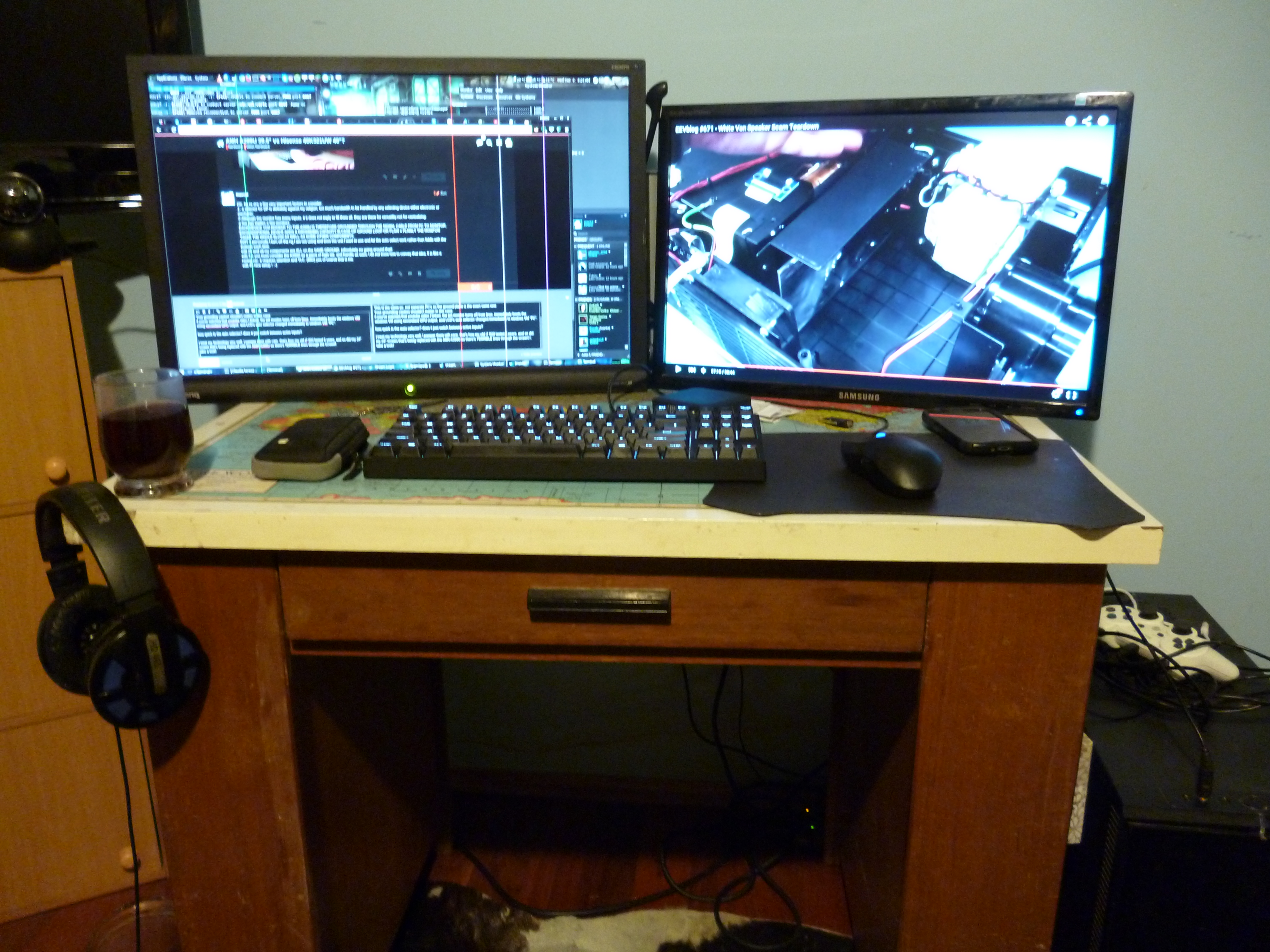 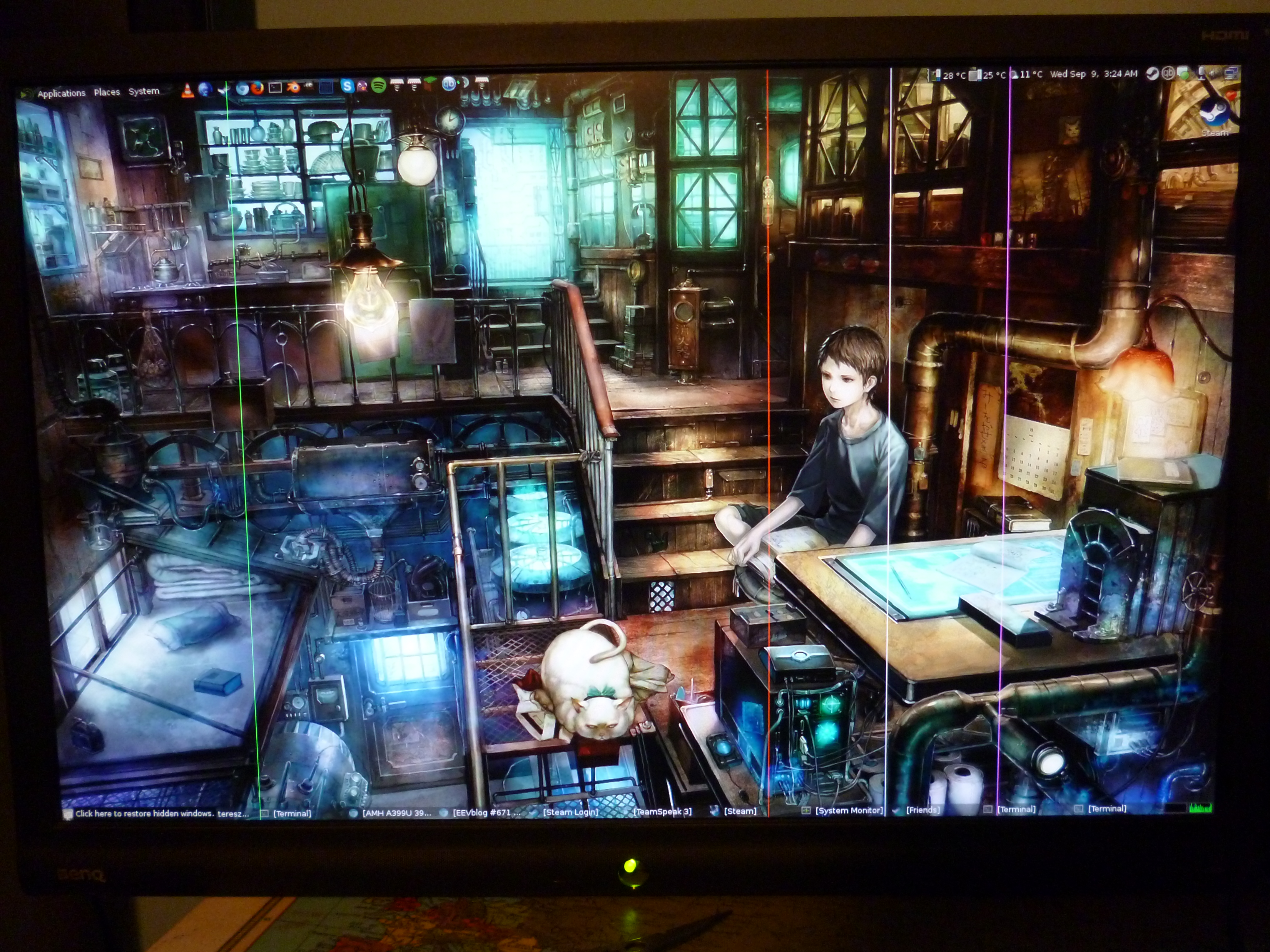 Do you mean auto select or manual select ?
and there are sometimes dead pixels, just do not pay attention to them, in 4k they are quite small; on one I have 3 pixels that I only see on black, and I have to look, in everyday use, i would be lying to tell you it bothers me. Now that I mentioned it , it bugs me ...... (lol)
are there really some absolutely perfect monitors out there. (at a decent price) For the investment, my A399U are the best I have done since Asus Rampage IV Extreme with 3970X 16G 2300 and a gorgeous DDR5 AX7990 6GBD5-2DHJ. By the way they make me fly when combined.

yeah with me getting this AMH A399U, it will be the best investment I'll be getting since this 24" BenQ which has served me well until 1 year ago from these horrible vertical lines.
Also if you didn't look at my profile I'm rockin i7 4790K @ 4.5GHz, 32GB G.Skill RAM, and GTX 970 G1 Gaming (OC'd), of course with the mandatory SSD for OS. this power level seems to suit me mighty fine, loving it! although X99 would have been a wiser choice for me since I got this Z97 setup 3 months ago.. now regretting it's major shortcomings. can't wait until I order this AMH A399U.!!
It will be the best thing since sliced bread!

may i ask were you are ordering from ? Be careful to get free shipping, do you have a preference from whom you buy ?

edit 1 = wait until they get all the bugs out, about a year to a year and a half; that is for x99. Funny now that all the bugs are out for x79, they force us to get sometimes a completely useless upgrade.

IDK who to ship from, I live in SA, Australia.
Who do you recommend to get screen from?
I upgraded to Z97 because my X58 died... but came back after a month... so gave the X58 to my friend, while now I'm stuck with Z97... if it died a few months later I'd have skylake and have everything I need.. or If I got X99 instead of Z97 I'd have everything I need. oh well that sucks for me. Z97 doesn't have enough PCI-E lanes for my needs, among a few other features, so I'm really feeling the mainstream squeeze! I was going good with my X58, and with the exact same clock rate, 4.5GHz, I see no performance increase with the Z97 at all.. infact I had more RAM on my X58..

I still think you did a wise choice, x99, skylake, ddr4 none of these are really ready for market, unless you want to fuck around. If you could get a good deal in X79, you would feel right at home with a big plus over the X58. I run the 3970X at 4.6 water cooled with an external radiator at 35 Celsius under load, and keep on trucking. All those new promises are too influence by marketing and sales than is good for us gamers/consumers.

I have dealt for all my screens with Dream-seller, and like them very much....hope they have free ship for you !!!

One thing I really like about dream-seller (ironically I was already looking at his listing) is that he uses tek syndicate monitor review on listing :P it fits in well.

Main issue is, even though it's 100Hz 4K... is that I don't know the real latency specs at that usage scenario, doing 3D 4K, especially with 4.4.4 chroma, over HDMI... well even HDMI 2.0 just barely doesn't have enough bandwidth for it. not to mention, does the Hisense even do 4.4.4 chroma. I doubt it with no diplay port.

There is no irony here, only fact.