As many of you know power is not an infinite resource and every computer chip has it's own thermal limit, with that in mind modern supercomputers mainly are built with efficiency in mind, not just overall performance. one of the main ways of increasing efficiency is to place workloads onto suitable hardware, with highly parallel computing tasks being mostly moved to GPUs and more less parallel tasks being used on traditional CPUs.

AMD believe the future is in HSA, Heterogeneous Computing, where tasks can be completed CPU and GPU hardware at the same time, allowing both types of hardware to work much more effectively by moving workloads to the most suitable piece of hardware while utilizing a unified pool of memory.

A paper detailing this future can be found here, but sadly requires a subscription. Here is a quote form the paper.

“Hardware optimized for specific functions is much more energy efficient than implementing those functions with general purpose cores. However, there is a strong desire for supercomputer customers to not have to pay for custom components designed only for high-end HPC systems, and therefore high-volume GPU technology becomes a natural choice for energy-efficient data-parallel computing.” 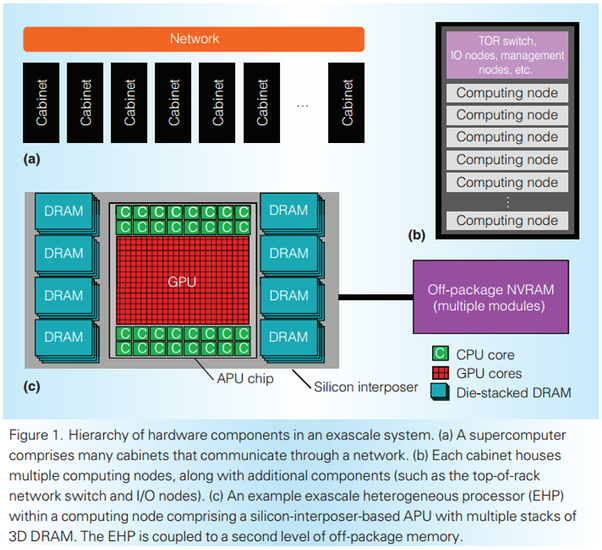 Inside this paper we see this, a model for a future chip which will contain 32 CPU cores and a very large GPU die, all connected to HBM (Die-Stacked DRAM) on a silicon interposer. It is likely that this chip will have 32GB of HBM 2.0 memory, with off package RAM available to the chip when required.

This chip will be most likely utilizing CPU cores using AMD's new Zen architecture, which will be AMD's all new architecture which will feature great gains in both per core performance and CPU efficiency.

Right now it is unknown when AMD will be creating this chip, or any similar design, but it is expected that they will be creating working samples in the 2016-2017 timeframe, with availability of this chip coming sometime before or during 2020.

So basically a many-core APU chip. AMD is pretty late on the many-core chip game but still their APU paradigm might be an interesting competitor. Good to know they are entering the domain.

hahahah WTF did you just say? AMD is NOT late to the Many-core game. AMD CREATED the many-Core game when they released the FIRST Dual core, Triple Core, Quad Core, Hexa Core, and Octo Core chips. This is their first 32 Core chip for servers. They were the first to the 16 Core and 24 Core Server chips as well. Athough the 24 Core chips never shipped commercially.

2016-2017 timeframe, with availability of this chip coming sometime before or during 2020.

IF they are still around by that time sadly.

AMD is pretty late on the many-core chip game

Yeah no. AMD has been WAAAY ahead of Intel when it comes to core-count in many instances. AMD has only been behind in single core performance. which will be the death of AMD if they don't get on the ball. HSA is revolutionary, but it won't get anywhere if the Core performance is a massive turd. and to add on to it, the REASON you even have a quad-core or anyone has one today is because of AMD.

@Kat and @LinuxMaster9 guys this architecture is not a multi-core. A multi-core and a many-core chip is not the same thing (yeah the terms are weak but that is how designers chose to call them). Designing a many-core chip for HPC is a completely different ball game.

This is a many-core chip concentrated on supercomputing. It is a competitor to Intel´s SCC (Single-chip Cloud Computing) and the XEON PHI. AMD does not have a competitor chip for these cases.

AMD has Super-Computer worthy components, in fact there are a few of them in the worlds "Top" super-computers. AMD's options perform fine for the money. just cause AMD doesn't have anything to compete for all of Intel's products that doesn't mean they are late. they just don't have the R&D to even make them. Intel's been on top for the past 7 years because AMD decided to focus on CMT instead of SMT. and if they don't change it will be the death of them. overall, AMD isn't behind in core-count. they've been ahead for a while. but they are now starting to fall behind in almost all sectors.

There are more to designing those chips than just core count. Efficient Parallel execution, communication, messaging and programming frameworks are greater issues. The classes of applications to be used on these chips are also different. A commercial 8-core desktop chip and a Many-core chip like this one use different design principles.

Intel has been researching these many-core chips for almost a decade and still was behind on core count in desktop CPUs because they are entirely different research tracks.

That kind of research track was not done by AMD until now and Intel already has a commercial product with the XEON PHI out there after 6-8 years of research or sth. AMD has a lot of ground to cover.

like i said, they don't have the R&D to continue research on these products and to manufacture these products . that's the main reason AMD has this alleged chip coming in 2018 to 2020 and they are behind in products. they are banking on Zen. if Zen fails that's it. if AMD has the money that Intel had, they would of blew Intel out of the water. and the only reason in my opinion it would happen is because prior to 2008 those last 8 years were AMD's golden years. they annihilated intel on ALL markets. they fell off after Bulldozer.

I do not get why you think I am accusing AMD for sth and you feel the need to defend them. I am just stating that AMD has a lot of ground to cover on this particular field and its a good thing that they are entering it.

do not get why you think I am accusing AMD for sth and you feel the need to defend them.

Actually I'm not accusing your comments for anything. My point overall is that, AMD was always ahead of Intel overall in the "Core" count market. they started falling behind recently. for example the 16-cores that intel just made, AMD has had for years. the 16-core xeons came around 2014, AMD has had them since 2011. like i continue to reiterate. the Xeon Phi just recently came out and AMD has nothing to compete with that.

AMD is pretty late on the many-core chip game

Is simply not true, they were always ahead until last year.

makes me think of IBM

This is a many-core chip concentrated on supercomputing. It is a competitor to Intel´s SCC (Single-chip Cloud Computing) and the XEON PHI. AMD does not have a competitor chip for these cases.

That kind of research track was not done by AMD until now and Intel already has a commercial product with the XEON PHI out there after 6-8 years of research or sth. AMD has a lot of ground to cover.

They started competing in cloud and supercomputing when they bought ATI. That is why they did not focus on many-core, they had GPGPU.