As a gamer and hardware enthusiast that spends a lot of time in various PC gaming communities, one o

This article/review/ho down is about an FX 8370 keeping pace with a chip worth 800 dollars more in video games. Take note of the 4k benchmarks. My takeaway is that Piledriver is still compelling, competitive, and cost-efficient. 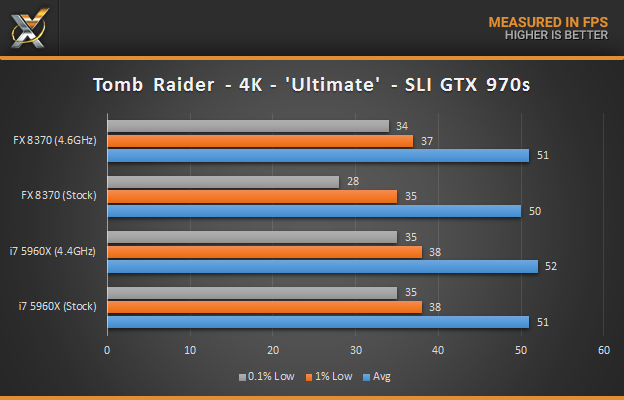 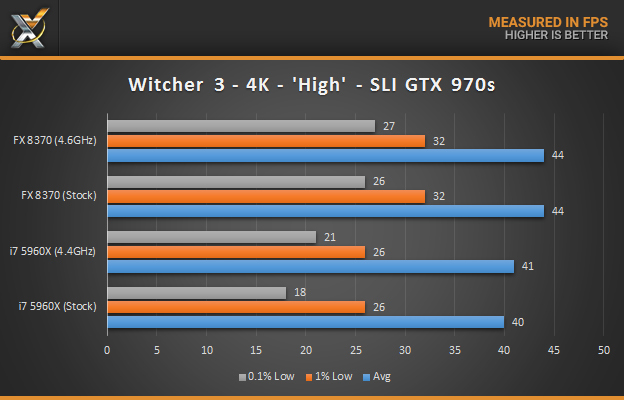 I allready reacted to your other topic.
But yeah its a very nice article realy.

I saw this on the LTT forums, I'm not surprised at the results. But you must take into consideration two things. The fact that the games tested is getting less and less CPU bound. And more GPU bound As the resolution increases. and two the game isn't using the full 8 cores of neither of those chips.

As for being competitive, the are in price, but not in performance anymore. Honestly not many are gaming at 4K yet, so these charts don't mean much for the average PC gamer.. The 990FX chipset is dead. The AM3+ socket is dead. You can get some quad-core intel parts in the same price bracket that will outperform the 8-cores in gaming in the resolutions people are currently playing at.. which is 1080p and 1440p. BUT in AMD's defense these charts also tell us, core performance won't matter anymore. The bigger question that must be asked is, will it make sense to invest into an Intel chip for gaming in the future.. according to these charts probably not.

AMD's future isn't looking bright.. If Zen fails, that's it for AMD. On a similar note, Intel could of put AMD six feet under if they wanted to, but i don't think they will. They rather let AMD fail on their own. As for 2016. It will be an exciting year for gaming. Hopefully we get something exciting AMD.

I allready reacted to your other topic.
But yeah its a very nice article realy.

Hope the reception here is better.

On a forum of a shill we got called shills for disagreeing lol.

First off, NO game uses 8 cores DX12 seems to only use up to 6 cores. This article was used to illustrate that to the uneducated. Most of us know that we want games to be GPU bound.

Also what CPUs are you talking about? a locked i5? My own testing shows that thing doesn't do as well. While the chipset is old as shit, (missing native sata 3 and USB3/PCIE Gen3) Its fine for gaming. I do too hope the best for AMD so that possbily Intel could drop the prices of the i5s and i7s.

On 4k gaming you are simply gpu limmited in most scenario´s.
The cpu does not realy make that much of a diffrence anymore on 4k gaming.
With the current gpu´s we have.

But at lower res like 1080p its ofc a diffrent story.

First off, NO game uses 8 cores DX12 seems to only use up to 6 cores

Obviously.. but not everyone will have a six core part unless they have the AMD FX chips. And in all honesty we have no clue if DX12 will properly use all the cores on lets say a FX-6300. As for this article, No.. this doesn't illustrate DX12 using more cores to the uneducated. The point of this article was that Core performance doesn't make a much of a difference in 4K gaming..

As for the locked i5's. they make much more sense for gaming than the current FX parts right NOW. In the future it may be a different story. Anyone who is jumping on to PC gaming for the first time, is NOT going to be gaming at 4K. Current resolutions like 1080p, and 1440p. Games still rely on core performance.. WHICH the FX parts don't really have.

The point of this article was that Core performance doesn't make a much of a difference in 4K gaming..

As for the locked i5's. they make much more sense for gaming than the current FX parts right NOW. In the future it may be a different story.
1080p, and 1440p. Games still rely on core performance.. WHICH the FX parts don't really have.

Yep this basicly.
Took a few items out of your comment.
Like i said on 4k you are gpu limmited mainaly.
How higher the res, how more gpu limmited you are going to become.
The load on the cpu will basicly not change that much.

Good god its getting good. I'm too tired to give actual replies.

The rage from fanboys is amazing. And the guy who said "But the I3 is better for gaming bc other sites" is the reason why we tested like this. Gaming on an i3 is painful.

Tweaktown did a series similar to this: 1 2 3

In a way, it is kind of a return of the old-days, when the best bang-for-your-buck thing to do was to recommend a decent dual-core Pentium. Now that games are starting to get more multi-threaded, and we're pushing the graphical boundaries again, we find ourselves a lot more GPU-limited than CPU limited.

I mean, in reality, what we're seeing in these tests is a GPU bottleneck - but the original point still stands: for most gaming applications the FX-8-cores are still plenty sufficient.