I plan use for my Gmod/sfm, Adobe Photoshop , Adobe Illustrator , Blender 2.67 for video editing, 3D modeling , rendering more. and gaming pc games and emulators as well.

Solid setup overall and the 390 will do really well in blender OpenCL render work. However I would somewhat recommend you use an FX-8350 for the processor instead as it wont cost much more (you can also save alot here by getting a used processor as they are very unlikely to fail). This is because the 8350 has a considerable multicore and a slight single core performance advantage over the FX 6300 which will help alot in your workstation build.

You could probably leave out the FirePro card too unless you have specific needs for it as the programs that you have listed will all do just fine with the 390 and CPU combo.

I think that will be decent :D

Some people recommend 8320's but I would steer clear of anything that failed the normal binning process for the 4 ghz + boost as the odds are you wont be able to push it past 4.0 ghz without the temps going crazy (I may be wrong here as I know people who have pushed them to 4.8, just saying the odds are against you).

yeah, agree about the firepro

i didnt read that far down on his build log, missed the firepro bit at the end, that bit is definately screwed up..

for that level of money he could have just gone x79 /socket 2011 with a much better overall build.

memory throughput helps a lot with video and 3d , you can simluate this to test it if you want.. run two renders and different ram speeds (same mem with diff xmp profiles) and you will get a fairly large speed bump with the faster frequency.. it's just food for thought.

If you are going to be spending a lot of time rendering then 2133 might be worth it to you.

I got great deal on 1000W PSU and safe to have more power then less. And still have power to upgrade to two R390 GUPS in future.

and you should really be getting a 5820K if you're going to do heavy workloads, especially for that budget.

Also a 4k display is going to be better for productivity, and that display is utterly terrible, 1080p at 34"?

and it includes a 4k IPS free-sync display, though it's only 27"

You can subtract the 130$ by installing cracked version of Win 7/8 activate it and then upgrade to genuine Win 10.

doesn't the free upgrade only last a year or 2?

I don't trust Intel after remove the over clock from there non-k over cpu chip set.And I all ready have AMD fx-6300 and motherboard at home too.

okay...well then maybe wait if zen if possible so your CPU isn't a bottleneck. 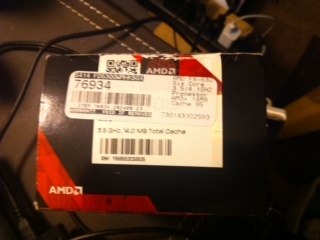 well then here at least, it includes a 4k IPS free-sync display for better productivity, though 32" or higher would be preferred, you could even fit in a 40" 4k display with the room left in the budget

Thank you sharing the build.