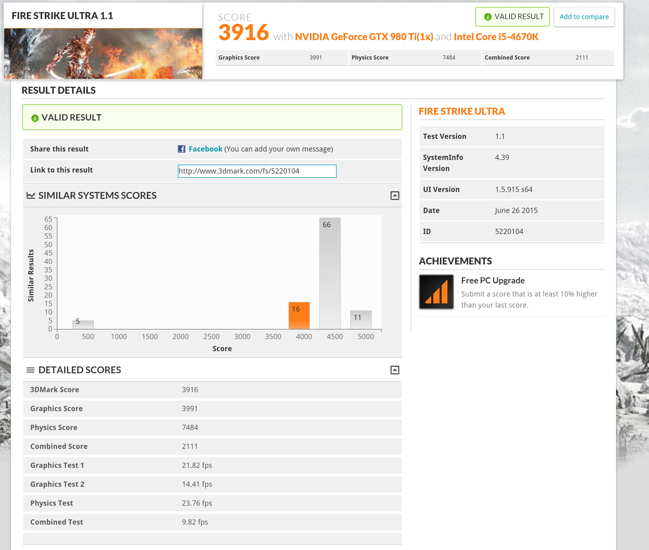 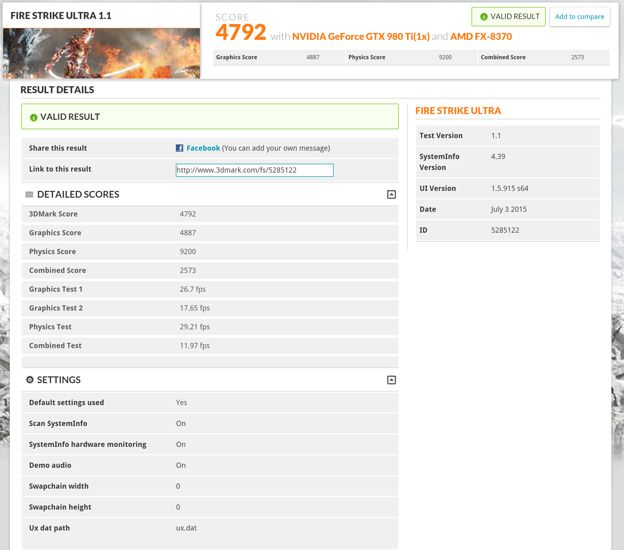 You have to remember the first Bench is with the card at Stock. The second is underwater. The difference in CPU score is what I'm talking about!!!

this topic realy doesnt make that much sense at all.
at 4K you are mainaly gpu bound indeed.

I changed it. I'm just surprised by the benchmarks. The 8370e actually beats the i5k Haswell. I think that's shocking.

which benchmarks?
It realy depends from game to game.
But at 4k you are gpu bound mainaly.

Yeah, I know that now.

I don't think its common knowledge though. The CPU makes no difference at 4K. I find that really surprising. I get the reason why, yet for some reason I still refuse to believe it... Everyone knows an i5 is better than an 83xx for gaming LOL.

well its not that hard to understand realy, how higher the resolution you are playing at, how more demending its getting on the GPU side, which means the card will pushing lower frame rates.

The reason why the term bottleneck even exsists, is because highend gpu´s like a 980Ti can push so manny fps on low res like 1080p, that you need a decent cpu with strong per core performance to be able to keep up with the card.
Since AMD FX cpu´s lacking on single core performance and ipc, in compairisson to haswell, you can see some massive diffrences in performance at 1080p / 1440p depending from game to game.

Especialy MMO´s and RTS games are well know for liking very strong per core performance.
But still this highly depends from game to game, and how well these games are optimized for cpu utilization.

Basicly there will allways be a bottleneck at a certain point, no matter which cpu you trow at it.

Just so you know, the two 980 TIs were not running at equal(ish) clockspeeds. However, even if the one with the I5 was running the same as with the FX-8370, it would not have been enough to make up the difference.

Anyway, yeah, this is why the FX-8-cores are actually still decently competitive when it comes to stupid-insane SLI/Crossfire set-ups. They still have the PCIe lanes to chug those graphics, and when pushing extreme graphics the majority of the muscle depends on the GPUs.

Want to see something that will really make you astonished, look here.

Great article where they asked game developers what cpu they would buy and unanimously they said the 8350. The article written 2 years ago is found here: http://www.eurogamer.net/articles/digitalfoundry-future-proofing-your-pc-for-next-gen
Basically it explains how game developement is shifting to multicore performance and how console and pc gamiing hardware affect game developement. Probably why the steamroller desktop cpu was cancelled. In the future how many cores will be the coin of the realm. It also explains why when tested in that famous tek syndicate video people were so shocked. Software moves at a glacial pace compared to hardware( I remember real mode in windows) but when it does it changes everything.

But this all still doesnt change the fact, that intel cpu´s are simply better allround chips for gaming.
Most todays games still dont use more then 4 main threads.
Thats why FX cpu´s still lose to their intel counter parts like the i5.
THe main reason for this, is basicly how the CMT architecture is designed.

I can go deeper into this technicaly,
But i have allready done this tons of times in the past, so i´m not going to do that again.

Intel vs AMD debates simply dont make any sense to me,
as long as AMD doesnt come up with anything new to the table.

No one is going to argue that AMD's current line-up is better. They're just pointing out that the FX-series isn't as bad as people would like to believe.

I think its amazing they do so well.

I know my benches where strange... It was between swapping MBs and Watercooling blocks etc... I bought the 980 Ti for my i5, but my main rigs going to be using the 8370e instead.

I had to use the Overclockers forum to find out how to mod the Bios, as none was available for my Card. I've finished everything now and my OCs are stable.

I saw on Overclockers they have benchmark competitions you can enter. I did the Valley one @ 1080p. I've copied the table 10 from my position:-

Its definitely not as good at 1080p - and my Overclocks are basically maxed (I didn't use tweaks though because I'm lazy).

Very interesting. This reminds me of the articles a while back about the 8350 at 1440p and 4k and how it doesn't really bottleneck at those resolutions. I can find it buuuuuuuut, eh.

Mine is the only single GPU listed -

Yeah but valley, firestrike etc, dont realy tell that much.
You have to compair it in a couple of diffrent games, and diffrent resolutions,
To get a better picture.
But at 4K like i said above, you are mainaly GPU limmited rather then CPU.

But at 1080p, and also some 1440p gaming scenario´s, you are more cpu demending.
Next to that, it also depends from game to game, some games are very well optimized for using multiple threads, but other games only use 1 or 2 threads.

That the FX cpu´s score well on 4k, doesnt exaly say anything.
Since you are GPU limmited.

I do agree, that FX cpu´s are not that bad, as some people say.
But yeah thats a war that will never ends.
Believe me i have readed tons of those amd vs intel threads, and honnestly 75 % of the comments are mostly nonsense.
But i use a FX8350 for 3 years now, and i definitely know its pro´s and con´s.

I haven't read through all of this carefully, but basically I agree with the OP's point. I see a loooot of negativity against the FX line. Why? You can't get better price to performance outside the series (all types of workloads considered). And while some games run noticeably better on some Intel chips under some conditions, I would question if it matters enough to justify price tag differences. A 6300 already got me good FPS in Guild Wars 2, a fairly demanding MMO, and slapping on a good cooler and OCing added another 20 FPS to demanding areas of the game. I've had to rethink how to approach advising builds. You really need to consider the task at hand, lest you are wrong in one way and spend too much or wrong another way and lose performance. But generally, yeah, the FX line is still strong, despite the hate.

I've gone back and totally reworked the Bios on the 980 Ti and OCed it stable. My results are amazing at 4K!!!

I think this is the maximum I can push the 980 Ti to safely.

The Overclockers link is Here. I'm not sure if my updated score is there yet though.

This should be the recommended 4K build @Logan.

I work it out as,

The entire system costs of the other setups are way more than double. I don't know the US prices but I guess it's even more pronounced.

Add a couple of hundred for a custom loop, or pre built water coolers, and the value is still there.

Well, like it was previously mentioned early in the article, it is mostly about the GPU at that point.

And I would argue that the AMD CMT architecture IS new to the table in terms of technology. Sure, people stuck with Intel's SMT cause intel can throw that cash around with wanton abandon but intel is using an OLD architecture. AMD is using a NEW architecture. With ZEN, AMD is expected to return to SMT. When that happens, I expect to see Intel switch to CMT now that AMD has matured that architecture for them.
That is pretty much what Intel has been doing in terms of technology enhancements. AMD breaches 1GHz, Intel soon after goes 1GHz. AMD goes Dual core, Quad core, Intel shortly after goes Dual/Quad core. AMD breaks 2GHz/3GHz/4GHz/5GHz, Intel follows suit soon after.
Intel seems to be using AMD for the new tech development and then reverse-engineering the new tech once it is proven. Saves Intel time and money.

Why would intel step back to CMT if SMT is obviously more efficient?