Guess its time to start benching. Man, i have turned into such a geek.

yeesss! Although im not on GCN yet.

Going to get it right know ! Thanks for the head-ups :)

Well , so far its a wash. Doesnt mean anything to my rig.

star swarm bench ran much better for me on my rig, but bf4 crashes now for some reason. Anyone else with that problem?

So far i have done just a regular bench with everything set back to stock. Noticed a couple frames increase on min , lost a few on average, gained about 5 on max. This is all normal win8.1 and directx 11. So basically as wash benching it that way (To be expected) About to start star swarm.

As of right now Mantle works best if you have lots of CPU bottlenecking.

Well star swarm is a very hard to believe benchmark test. Off to pick the biggest fight i can get into on a MMO.

Well i tested out the starswarm test not bad. 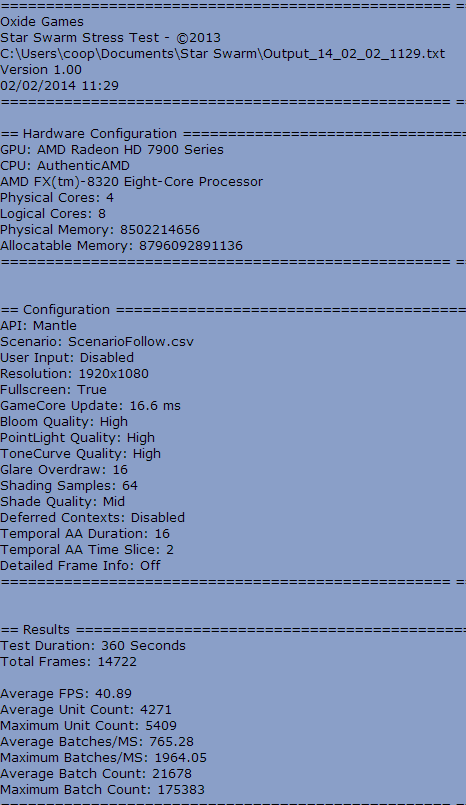 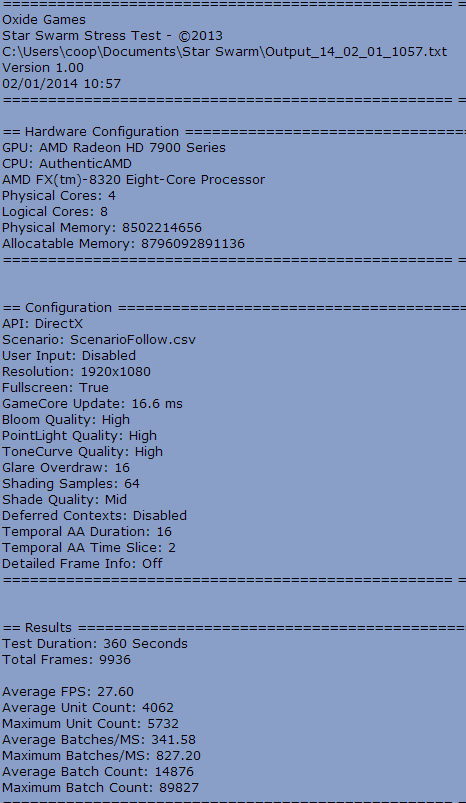 ya, I wanna run mine a few more times. See what the average is. I am at point now that i am seeing + 12 frames on max a few frames on average even a frame or two on min. on the heaven bench. Still trying to get my ram to play nice with my oc.

I tested bf4 too on siege of shanghai on DX11 running in between the skyscrapers at the spawn point used to drop my fps to 30-40fps from a vsync'ed 60fps now i dont get any drops in that area.

Had to throw out my oc results. By the third round and the very last test, my oc proved to be unstable. so re doing the my oc's.

That looks promising. Maybe I should go ahead and grab a second 7870.

mantel is all cool and stuff, but it broke my minecraft :L

i cannot see any blocks in it, all other games run just fine :(