So I've been watching amazon a little more closely now ever since I noticed a "sale" that was more or less entertaining over black friday. They boldly stated that one would be saving well over $400 on a tri-x fury because the previous price was just over $1000 dollars. Comical right? I am afraid that the list goes on to almost all PC components. Now, I can't tell you if Amazon is blatantly lying about all tech prices, but I can tell you that these "sales percentages" of "savings" are not based off their current value. Amazon is using previous prices based off of when the product launched. I've literally watched a ssd increase in price from the previous day and then witness it say that the product had a 45% discount. All I have to say is,"WTF!". Tek Syndicate peeps and community, please help me to understand. 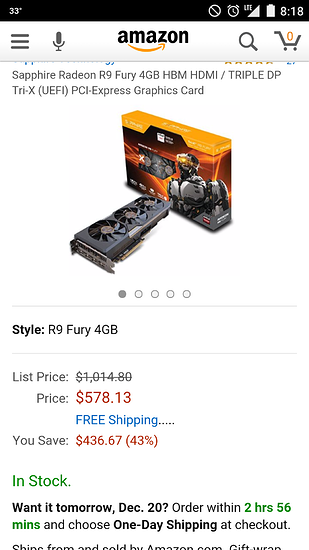 I to have been watching Fury prices closely.

They jack up those list prices so anyone that hasn't been watching those prices thinks they are getting nearly half off. Dick move if I ever saw one, should just have MSRP instead of "list price".

Its simple enough to understand little increases but come on $1000!? I'm trying to understand what part of the sales "playbook" this is. Or is it just a shot in the dark hoping that nobody would notice?

Nobody that isn't watching those prices, i.e. parents building rig for kid. So yeah that

PC Hardware is overprized to hell on Amazon. But shipping and easy payment makes it konvenient.

The Only things i buy on Amazon is cheap crap like 5€ blutooth doongle, usb soundcard, audio mixer, Musik cds , sometimes used tech, the odd camble here and there and ofcourse n2o cappsules for "making cream" wink

I always buy pc hardware on my shop of choice mindfactory.de because its much cheaper with a large selection and lots of filter options. 560€ is the regular price for R9 Fury tri x .

But the problem is that the fury was NEVER that price! Its ridiculous

To be fair the tech community can be pretty stupid at times.

Anyways, Amazon does that on quite literally everything on their website, so it's not really anything new.
Heck, here's a pen with an exorbitant list price.

I'm seeing that now I may have posted this out of straight emotion -_-. I weep for the world

Nobody else knew this was a thing? Amazon always does that, where they put a ridiculous previous price just so they can say its a bigger discount then it actually is. This totally isn't a new thing...

I doubt it is someone going in and setting prices unless it is a third party seller using Amazon. At their scale, they have to be setting prices using an algorithm and it is probably their algorithm being dumb. Anyone here work there and know?

Sounds like a strategy employed shamelessly in there UK by a furniture chain. Advertise a few items at inflated prices for a while then base the sale prices on that, actually everything ended up at 50% off permanently.

if you're buying modern hardware, there's two places you should be buying them if you want to be paying your money's worth. Newegg, and Microcenter. If you need to pick up some old stuff, Amazon and Ebay is your best bet. other than that. not much you should be buying on Amazon, besides little things.

And here we are in the strange land known as random Australian stores. http://zoxoro.com.au/Products/MSI-Graphics-Card-R9-290X-LIGHTNING.html?gclid=CjwKEAiAndSzBRDp5P232v-qtHkSJABw-Vdt7MHmWnX4vRpP_VpayeuuNVouBMl36bbkU-x_YfJwcRoCVy3w_wcB

please help me to understand

Gladly. There's this thing called the Amazon Marketplace. It's where people can sell things on Amazon. Amazon allows these sellers to set their own prices. All it takes is ONE seller listing a product at an absolutely insane markup to cause the list price to show that amount. If you add the cost and shipping of the highest listed card you're showing, it comes to $1,028.04, higher than it was when you posted this. Amazon doesn't think the tech community is stupid. It's the seller, SkyLine, located in Deleware, who does.

This is price gauging. And it is illegal in normal countries.

This is completely normal for pretty much all listings, not just tech. On Black Friday here in the UK (the fact that we even have that is a topic for another day/thread) I saw a few products that were, for example, around £20 as standard and £16 on a Lightning Deal but the Lightning Deal stated £14 savings, showing the original price as £30.
If you're keeping an eye on the prices it's not too bad but when you see an item that you fancy and it states £30-40 savings instead of the real £4-5 savings that's just wrong and they shouldn't have been able to get away with that.

Yeah here places like shopping malls gradually markup their prices over the course of weeks leading into a holiday or sale season, and then put big sale stickers on everything to make people think they're getting a great deal.

Price increases 100% over the course of a month, and then goes on sale for 40% off. They not only convinced you to buy that new fancy coat you couldn't afford last week, but they convinced you to do it for more money just by making you think it was on sale. Nothing new here really.

Yep, saw a french coffee kit listed at $1,000 original, down to like $10.00 or something. Scratched my head, googled it out of curiosity and normally it is like a $25.00 kit or something. I should have taken a screen shot, was just amazing. I imagine the vendors have some control on the pricing and its a hard job for Amazon to police all of it.

IMO black friday is way overrated. I'm waiting for after Christmas, I imagine thats when the real reductions will happen to clear out inventories and make room for the new stuff. I've been looking for GPUs and figure when the 2016 stuff is about to come out, the current offerings will become very affordable to clear the way.