Any one know for sure if its coming or not, everything I am seeing is looking like not so much. I was hoping to upgrade my FX6300 to an 8 core. That said I need to upgrade CPU and MOBO (Crossfire!!) and wonder if I should just exhale and go Haswell.

we can't even say for cerain if there will be enthusiest grade chips, let alone what motherboard they might use

Ya its all about the APUs at the moment. I hope that AMD has something planed. I have really enjoyed my FX6300 and learned alot with it but its time to move up the performance ladder and the 990 AM3+ boards just dont measure up anymore.

This is what I've heard too. AMD is planning to ditch FX processors and just make 6 and 8 core black-edition APUs instead.

No steamroller planed for 2014 just new AM3+ piledriver cpu's there.

steamroller will be APU only,after 2014 i will expect AM4 with DDR4 support. 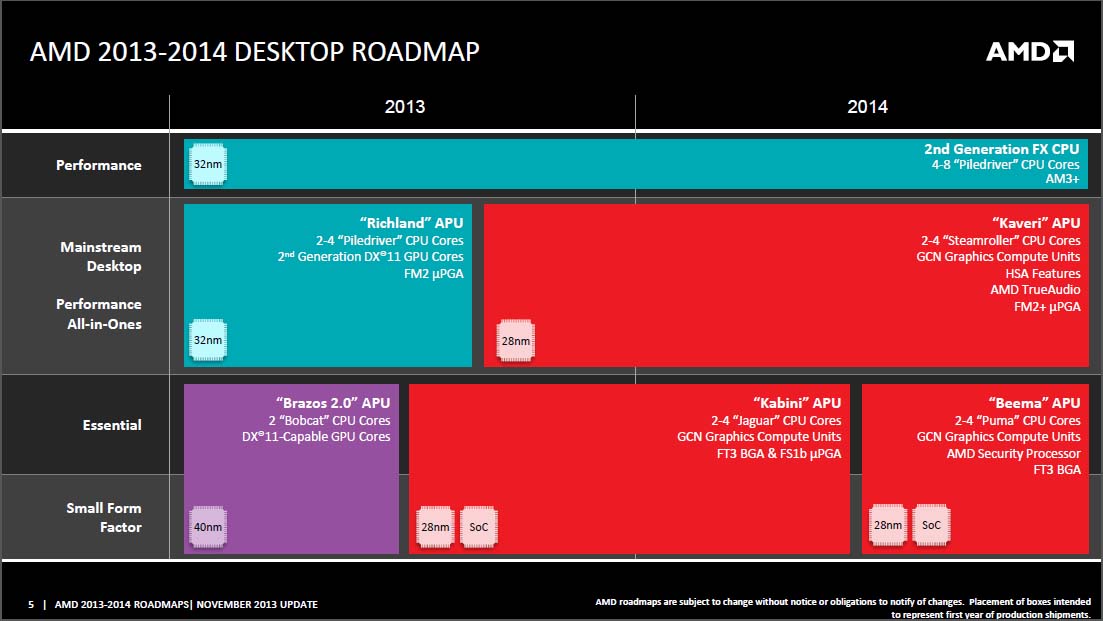 then again, who knows? just cause it isn't in the roadmap, doesn't mean 100% that it won't happen

That would make sense. A new release now might be wasted resources/funds, so they'll maybe just put out some new Piledriver refreshes with better power management or something.

Well sorry AMD I guess its Haswell this time.

AM3+ has been abandoned completely, it's all being move to the FM socket(s)

my bad, didn't know. Just quoting the majority of sites

it's a shame but im jumping ship over too intel with broadwell i believe it is when it comes out next year. as i really do not see any sign of amd doing any more performance grade cpu's. shame really.

yep, next pc will probably be ivybridge

Well looking at that roadmap I would't say AMD has abandoned the FX series or performance based CPUs, the bar continues, it doesn't stop. Keep in mind that broadwall won't be released to very late next year (bassically 2015), there is no 2015 on that roadmap but who is to say there won't be a performance CPU in 2015, an FX8350 is still competitive against a 4770K, by then we might see an excavator 8+ core performance CPU on a socket supporting DDR4.

Still don't understand what people are complaining about with the performance from AMDs AM3+, the FX8350 performs comparable to the 4770K for like half the price, the next step up is to get a 4930K on socket 2011 and after that the price you pay for every little bit of increased performance is insane.

Don't see why, it is supposed to be a tick generation meaning little performance increases and I believe there won't be new featursets (no DDR4, no sata express, no pcie 4.0, no faster onboard NIC), you have to wait till like 2015Q4 (2 years) to get to the next tock generation from intel, and to get DDR4 on consumer level.

I'm curious... How do the AM3+ mobos not measure up? For example a Crosshair V Formula Z?

DUDE, what do you have against AM3+ mobos? What essential features are they missing compared to an Intel board? Are you talking about PCI-e 3.0??  Sounds a little fanboyish dude.

People spouting hate about the Am3+ boards have obviously never used a Crosshair V Formula Z, can't say enough good about this board! I like it so much I picked up a second one last weekend for my secondary build I'm putting together with my spare 8120 I got laying around! :P

because all it will require is for me to change out my mobo and cpu, that and i'm still on a phenom. iv waited long enough.