Am I killing my motherboard?

Hi, I have a Gigabyte GA-970A-DS3Pand have started trying to overclock my fx-8320 on it. Right now I have a stable overclock at 4.2Ghz at 1.416v under load 1.424 when idle. The problem is that my VRMs are overheating when I run prime95, every 5-10 minutes it'll throttle to 1.4Ghz for about a minute and then go back up to 4.2Ghz. However, I tried playing BF3 for 2 hours and it didn't throttle once. So really I just wonder if my motherboard will be damaged if I run my computer like this or if it's fine as long as it doesn't throttle during gaming. This is what the motherboard looks like: 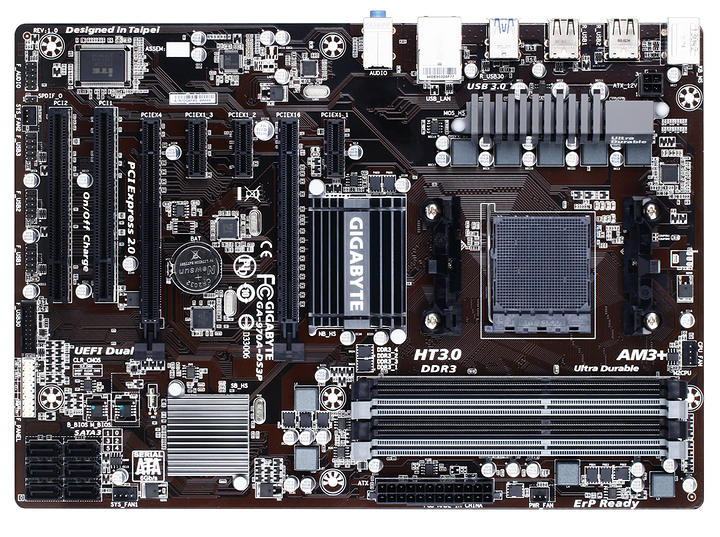 I think it should be fine during gaming, I highly doubt there is any games that can take advantage of all 8 cores at 100%.

970 chipsets usually have inferior power designs. You'll need to go for 990FX in order to get a better overclocking motherboard.

If you're really worried about it, you can just buy some small heatsinks and thermal tape. Will keep them cooler.

I actually had that same board on my old amd system, I hated how the standoff mount points are jacked.

Don't push the 8320 on that board, please.  You'll end up with lots of throttling(which you are), and have a chance of burning out the motherboard.

I highly doubt you'll ever be able to wear out the motherboard by overclocking. unless you push it to some really high voltage but even then the cpu would most likely die long before the motherboard. also you shouldn't be overheating at just 1.4v  because most pc parts are designed to use 1.5v.

that said is your gpu Overclocked as well?  if you have a decent card you should be fine with your cpu around 3ghz.

As someone who has killed a mobo before, you are probably killing your mobo. I had a z77 from msi that I slowyly killed thanks to overclocking. It took a lot of abuse before it  died, but it did eventually die. If in doubt, table fan out.

That motherboard is kinda crappy and you shouldn't be running an 8 core on it to begin with. Let alone overclocking.