Ajit Pai wants you to pay $225 to file a complaint 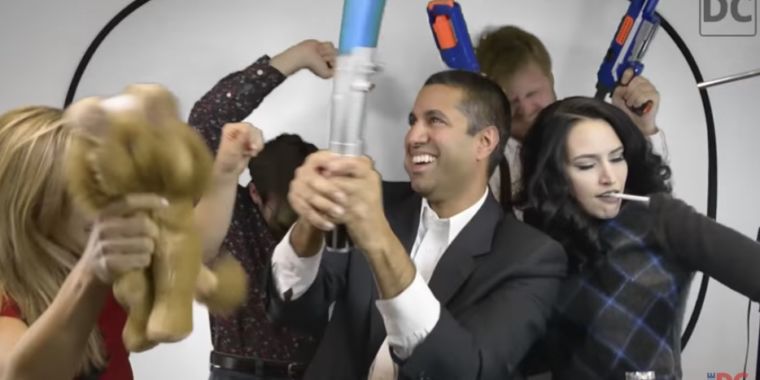 “This is bonkers”: FCC wants to stop reviewing most complaints about ISPs

What other ways can we spam them, just for fun? They want you to pay 4x the average home internet bill to file a complaint now. Ridiculous! I could seriously spit on this guy if I saw him in person.

I’v never really had a reason to file a complaint about my ISP but still, this seems fucked

Time to rise up against the corporate tyranny. They have you all over a barrel, and there is seemingly nothing you can do about it. It is not going to get better, each iteration of this will get worse.

Trust me I’m neck deep in conspiracy theories. But what do you do? Go riot? lol.

I really don’t want to have to use my arsenal (;

He’s basically saying “Yeah I pissed all of these people off, fuck it unplug the phone cord.”

I guess you have to lobby your representatives, or if you feel they are being bought, vote in someone honest. it sounds the least effective, but probably the only good way.

He knows what he has done, and how much of it is all for show. Now it’s all but put into law, no need to keep up the charade.

What power do my state reps even have over the FCC? I didn’t think any

I get you’re upset, but the title you’ve chosen is outright vulgar. Please change it.

That said, this is some serious bullshit. Not a fan of Pai.

What power do my state reps even have over the FCC? I didn’t think any

That’s a good question. I’m fairly certain that the FCC lands squarely in the “bureaucracy” section of Government that’s functionally untouchable by reps and senators.

Now let me preface this that I’m in no way advocating for violence. However it’s an issue that crops in my mind for issues of such kind once in a while.

The way things are going, I can’t help but wonder and think, that at some point someone else might say, enough is enough, the legal means and routes don’t work. Until they snap and resort to violence.

Particularly because it’s such an unclear issue with no obvious recourse or ways to approach it.

One classic example is the Killdozer incident. He tried all the legal means to resolve his dispute, until he said screw it and did things differently. Marvin John Heemeyer (October 28, 1951 – June 4, 2004) was an American welder and an automobile muffler repair shop owner most known for his rampage with a modified bulldozer. Outraged over zoning disputes, he armored a Komatsu D355A bulldozer with layers of steel and concrete and used it on June 4, 2004 to demolish the town hall, the former mayor's house, and other buildings in Granby, Colorado. The rampage ended when the bulldozer got stuck in the basement of a Gambles store he was in the proce...

Problems like these which have no clear ways to be resolved where the politicians and people responsible isolate themselves from the wishes of the electorate to me always feel like they are really teetering on the edge of someone resorting to alternative means.

When a problem has reached this level where I get these nagging thoughts it really worries me.

At some point these things either get better or a lot worse. Rarely does the situation stay stable.

If you believe all the stuff on Snopes the guy was a pretty huge dick before he ever went on a rampage.

It was just an example really, No matter who he was. Quite a few people in that town apparently where rather unlikable characters.

But what I’m saying is:

At some point the entire FCC issue as it stands now is going hit the fan running. How exactly that happens remains to be seen.

That is because in a lot of situations, there really is no recourse. Not without unimaginable stacks of cash to do the same thing but of the opposite effect, buy out politicians and force them to do good? Idk lol.

I’m not an advocate of violence either but I think there is a line I would draw at some point, and that is a longggggg way from my Internet connection being tampered with. Then you also have the problem of getting others to participate, which is just not going to happen. Americans are complacent and many can’t be bothered to even discuss politics.

In my view, the most vocal are often the most ignorant.

This feels like children pushing their boundaries with no parent around to tell them ‘no!’

I’m not an advocate of violence either but I think there is a line I would draw at some point,

Be careful of where you draw it though, we once had a thread on NN and Pai and a user called for his assassination.
thread did not last for long 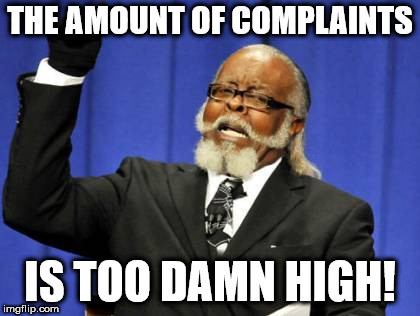 what is even the problem then

Besides the filing fee, formal complaints kick off a court-like proceeding in which the parties appear before the FCC and file numerous documents to address legal issues. It isn’t an easy process for consumers to go through.

it seems like if you are going for a formal you are either a lawyer or paying one so in reality $225 is a small percentage of what a formal complaint would cost.

“but kewldude you should be outraged!”
No, read the damn article and think for 30 seconds and you will see this is a nothingburger

“But the implications of this though!!!1”
Stop fear mongering / rumor milling, you are not helping at all, go back to reddit

Im still not happy though because the FCC is a tax funded organization. IMO if we are already paying for it, then it better be free for informal civilian complaints, and free for formal legal complaints as well.

I’m not stupid enough to ever say it out loud (especially not posted on the internet).

It’s just a slap in the face really. This guy is supposed to be a public servant.

Many thing to government does are face slaps, being a public servant ends when they get your vote, and if you aren’t an elected official? Do as you please right up until the next highest pay grade replaces you.