Winter break coming soon for school, thinking about trying to reproduce a similar test with AMD hardware and a couple different cases to see what happens.

I suspect if the card wasn't blower style the "random shit test" would have had a greater effect.

The choice of blower style here really confused me...

I was like "I must have seen it wrong, they cannot be that silly"

Yeah I was going to test with open shroud gpus for that exact reason.

Open shroud might have a 1-2c impact with poor cabling at best. I'm sure the t shirt would have been a disaster and crashed the computer

Open shroud and fans off on the GPU would have made a massive difference.
So there is another video coming. Any bets?

What this test proves isn't that air flow doesn't matter. The last video that he made like this with the different fan configs shows that air flow does matter. What this test shows is that air flow isn't easily hampered/impeded. I am now interested in more real world scenarios. Mini Itx cases, and few fans in the mix, things like that. Maybe an open air cooler on the gpu instead of a blower. Maybe a stock cpu cooler.

True the GPU was using a blower, but the CPU didn't go up in temps until he added a bunch of crap in the case.

That speaks volumes on how cool(get it) current gen CPUs are compared to years past.

wtf he put a iron in there?

Also, the comments for this video are pretty funny: 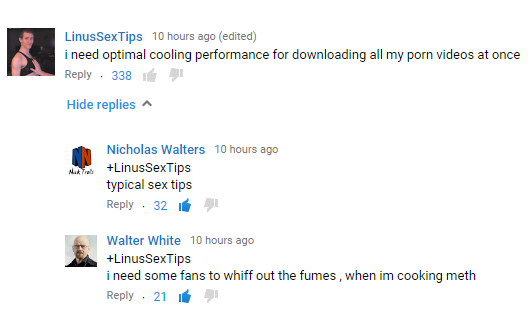 Yea never understood that idea that cables would dramatically decrease airflow, its kinda silly. However it would introduce more areas where dust could accumulate thus having temperature issues. But yea other than that no idea why people believe cables would impede airflow.

I want to know fan speeds before and after.

Most likely a axial blower.