Advice on Headphones primarily for gaming

The more I read the more confused I get... One thing is for sure, I am sick of over paying for mediocre sounding headsets with a mic. I definitely want an open headset and am currently stuck between the Audio Technica AD900x's for $150 which I can get right away or AKG K7XX on massdrop for $199 which wont ship for a month. :-(

I am running a GIGABYTE G1 Gaming GA-Z170X-Gaming 7 motherboard which comes with a Creative Sound Core3D Quad-Core Audio Processor and Gigabyte amp-up audio. Would this handle the AKG's without issue or should I consider getting a DAC with this headset?

As far as my audio preferences, I do appreciate clear bass but do not care for it to have a very strong kick. I really prefer clarity and balance between high's mids and lows. I primarily listen to rock/metal and rarely listen to rap or techno so really deep bass is not necessary which is what has landed me on these two so far.

I am open to other suggestions, however as I would consider this my first proper headphone purchase I am trying to stay under 250 for the cans alone. If I need a DAC that is something else I will do further research for and purchase separately.

The K7xx is a much better headphone all things considered. Don't have the time to go into detail right now, but trust me on this. You won't be sorry if you go that route.

A DAC is just a digital to analogue converter - your pc does this and you dont need an external one.
The AKG's and the ATH's have an impedence lower than what your board can output so you dont need an amp either.

Yes an expensive DAC may give getter sound quality
Yes an amp may colour the sound and/or make it louder but you DO NOT need either with what you are talking about.

I love AKG but ATH are also excellent. Go with whichever you like they are both good cans, but I personally find AKG to be more comfortable especially if you are gaming for long sessions.

I can't give you a 100% answer as you didn't list what games you play as sound engines differ from game to game.

I use the ATH M40x with a Focusrite Scarlet. It has a flat freq so you will get balance and clarity. My audio setup costs around $190 (before shipping). Don't let the price drive you away (It's $90) as it's an incredible sounding headphone. I use these headphones for everything I do/play. I mainly play CSGO but I also play game like Europa Universalis, Total war series, MMO's, really all games.

I haven't tried any headphones above this price tag so I might have the same expertise or experience as a gamer audiophile.

depends on what games you play, AKG has great soundstage so for games like CSGO they're my goto headphones (700 series that is)

personally the HD600s are my favourite all arounder, and the Philips SHP9500 for less.

These are on sale from their normal $160 price tag. 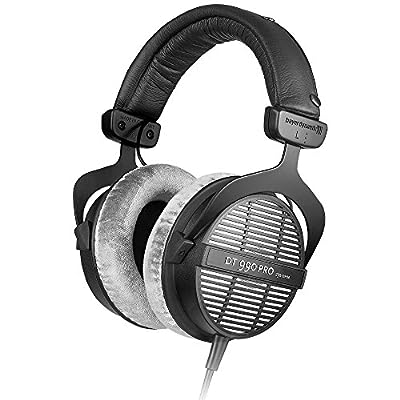 The DT 990 PRO 250 by Beyerdynamic is an acoustically open dynamic headphone of exceptional quality, suitable for the most demanding monitoring and studio applications. The reduced weight of the diaph ...

I'm currently playing The Division, CSGO and Path of Exile. Taking a break from MMO's but may get back into them with Camelot Unchained.

I was interested in the DT 990 pros but steered away because of all the comments that they were very treble heavy and the shallowed ear cups are a concern. The price at 145 may bring them back into the picture. Would my board be enough or is an amp needed?

I have listened to metal with the ath cans and they're really meh with metal. They really shine with classical and orchestral and female vocalists and whatnot.

I like my Sony mdr10rnc in not noise cancelling mode for metal, as well as my senn hd598se. I haven't used the k7xx but I've heard they're pretty good for what you're looking for too.

Thanks for all the input. Sounds like the ad900x's are out and I will go with the AKG's unless I find something else before the drop ends.

So I decided to go with the AKG K7XX.

Any recommendations for an amp? Do these have better synergy with tube or traditional amps?

The K7XX was based off the later releases of the K702 65th Anniversary Edition. I have the 65th, and it is an excellent sounding and fitting pair of headphones. They're great for both gaming and music.

Mad Lust Envy has a great guide on gaming headphones. It might point you in the right direction.

The K7XX was based off the later releases of the K702 65th Anniversary Edition. I have the 65th, and it is an excellent sounding and fitting pair of headphones. They're great for both gaming and music.

Mad Lust Envy has a great guide on gaming headphones. It might point you in the right direction.

Great to hear. The massdrop ended a few days ago. Unfortunately they will not ship until May.

Any input on amps?

The impedence is the same as the 65th: 62 ohms, which is low enough that it doesn't require an amp...unless you want to blow them out, that is.