Hi all, I would like to add some subtle lighting in my case. I have a CMStorm Scout 2, which has a LED fan switch on the top:

(left of the power button)

There are 2 connectors that are controlled by that button, one of them is already used to control the leds in the fan that comes default with the case. 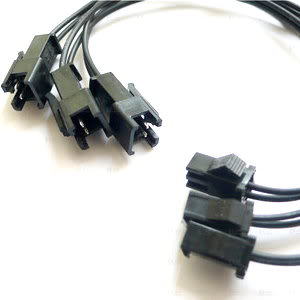 the connector I'm talking about is the one on the right of the picture.

Now, I want to add some custom homemade LEDs in my case, and I thought it would be nice if it would be controllable by the switch on the top of the case. The problem is that it seems like it has some weird security or so, because there doesn't seem to be any electricity when trying to measure it. However, the leds in the fan work perfectly fine with both connectors.

I'm a little off road right now. Could you describe what connectors there is to the LED switch? (i.e. does the switch also supply the fans/LEDs with power?)

The led switch has 2 female connectors attached to it. One of those is already used by the fan that comes standard with the case (like this one). So, I have one connector left. The picture above is simply to clarify: connectors on the left are male, connectors on the right are female.