Has anyone ever attempted this?
And how did you do it?

On the racing sim I have no answers.
however the AUX mods I do.

These little dingdongs saved a lot of my friends a pretty penny.
Normally I wouldn’t use Ali parts in my car just for safety reasons, would look at the used market if price is a thing.
But Ali has some pretty good, handy, funny things on its site for a few bucks.
Aslong as you keep it to the gadgets it’s pretty nice.

Yah ehhm, thank you.
However it doesn’t have aux, so i can’t plug any 3.5mm into my radio.
Nor does the radio have bluetooth or any input besides fm or cd.

And i truly adore 3.5mm, bluetooth just doesn’t cut it.
One of the reasons i’ve got an LG V10

I-am not afraid to solder, it’s just that i can’t find any clear schematics online, or english video’s on the stilo.

You would need to take out the head unit and solder wires to the the lines going into the AMP input leads. good luck with that.
Just by a better head unit or hook up an amplifier that feeds to your speakers.

Are there any other head units that came stock from Fiat that have an aux input that might be a direct fit? As far as affordability and ease of assembly that would be a good option if available.

I don’t know what it is like in other places, but the junkyards around major cities in Florida are stuffed to the gills with cars. People throw them away and buy another. Most used parts are cheaper now than in the 90’s.

I have no idea what this says but have a look https://www.polovniautomobili.com/auto-oprema/5087694/fiat-stilo-usb-sd-aux

Or you could just get a normal head unit and a dash install kit. Something like this https://www.aliexpress.com/item/CARAV-11-059-Car-Stereo-Radio-Fascia-Plate-Panel-Frame-Kit-For-FIAT-Stilo-Stereo-facia/32813203547.html

I looked into this before for another older car (never did it though). Most of the guides that I found said to solder the connectors of an aux cable onto the line-level outputs of the CD unit, then burn an audio CD containing only silence. Put the blank disk on repeat, and it’ll listen to the signal from the cable. I’m not sure if the CD player’s output might interfere with the signal; it might be better to just clip the CD player’s leads. You’ll still probably need a disk to play if you do this, but it won’t matter what you play (this kills the CD player). Downside is that you need to drill a hole somewhere for the cable to exit through, which might look shabby.

This is a Bluetooth FM transmitter. I was very impressed with the sound quality, it’s good enough that when I got a car with an AUX I kept using it. Highly recommend. 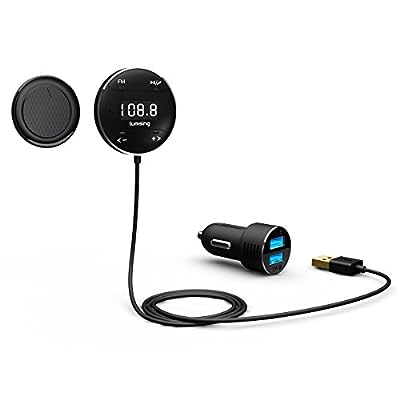 The Bluetooth Car Kit is designed to provide a simple hands-free solution for answering and receiving phone calls while on the go. Also stream stereo music from your smartphone, tablet or other Blueto ...


The price unfortunately went up since I bought it.

Edit: Sounds better the higher you can set the frequency.

That looks really cool. I’ve never seen anything like that before.

It’s really great. I take it with me when I ride in a buddy’s car, so we can jam out. All it needs is power, and it’s ready to go (real nice to move between cars).