Recently got around to overclocking my AMD laptop, thought I would share the results as it may help someone out. My reason for overclocking is because I was only getting 20-40fps (1600x900) in Warframe with lowest settings. After overclock I'm now getting 40-60fps (1600x900).

I tested my laptop with the settings below through 3 runs of Geekbench 3, Cinebench R15, PassMark, and several hours of playing Warframe. 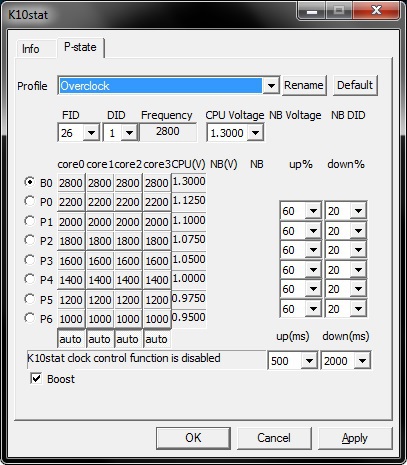 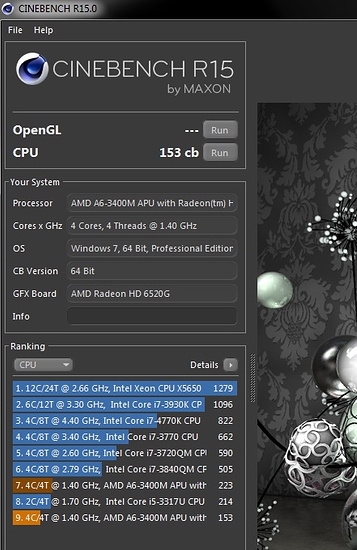 that is a fairly awesome speed boost, just be careful of the fan crapping out on you or bad thermals over a longer time period.

seems like you have that pretty balls to the wall and the price of that comes with having to do regular checkups :)

btw... I can push mine further but I dont like noise / high temps and this is as far as I can take it for 24/7 general usage without it getting too noisy / hot on me.

hats off to you

Will be posting results soon I upgraded the A6 3400m to the A8 3520m and its running cooler at higher clocks.

Adding the K10stat to Windows startup has not slowed anything down from what I can tell. My laptop is actually noticeably faster. The main thing I don't like about K10stat 1.54 is it has to be applied after any restart or shut down. Even when windows loads it on start up it just brings up k10stat and then you have to select your overclock profile and apply. Not a huge deal takes like 3 seconds to apply and close it.

It was very easy to upgrade to the A8 3520m. AMD uses a socket in most of their laptops that is very similar to their desktops, so upgrading the CPU was quite easy. The A6 and A8 far as CPU performance are pretty much the same after overclocking both being comfortable at 2.8GHz boost (B0) 1.3 - 1.3125v. Both also were capable of 3.0GHz boost @ 1.3125v but 2.8Ghz is just a precaution for daily use. After more use with the software I no longer mess with the stock (P) states, I leave them stock and only increase the boost or (B0) state to 2.8GHz @ 1.3 - 1.3125v. This is still very effective being that anytime you do something on the laptop it jumps to its boost clock anyways. Stock vs Stock the A8 is a bit better than the A6, it is definitely worth $15 to upgrade to the A8. The biggest performance increase the A8 has over the A6 is the iGPU or integrated graphics.

I will be posting the A8's benchmarks soon.

Not bad its worth the $15 upgrade.