Try not to laugh:)
Been using this as an upstairs build, after 6 months decided to OC and bench.
Due to a weak cpu cooler and finfet decided to OC the iGPU
The MB MB was only 10 bucks with a 10 dollar mail in rebate, ie free.
Ram is EVGA 2133
Cheap T2 cooler, old PSU,case and old 1TB SATA 1 HD

Tried OC igpu at 1020, unstable. 960 was better, played titanfall then CSGO and then it froze.
OC iGPU at 900 seems stable
Bench was starswarm mantle
STOCK: 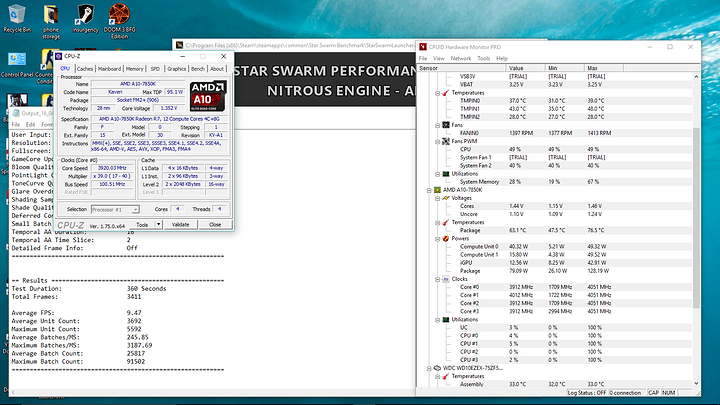 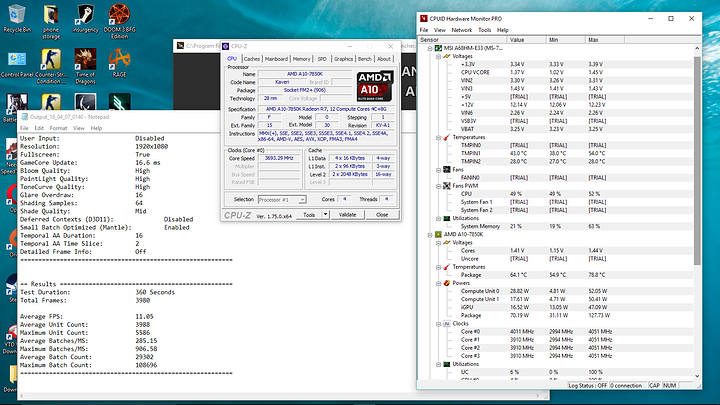 I have the V2 model, and an A8-760 (non-k) and it's a hard to OC with non-k parts but doable. A lot more work tho. Just make sure your PSU doesn't burn down first. Anyways, that's great that you were able to OC th iGPU with decent clocks, getting a new cooler would certainly help.

I thought of that. Right now I am hitting 127 watts. Would like to get it to 1020 MHz on the iGPU and then go dual graphics. Figure with both at 1020 or so they might work better. Also I would like to upgrade the chipset heatsink, it gets aweful hot.
The board only has a 4 pin cpu plug so for me going above 140 watts is a big no no.
I should take pics of the inside, especially the PSU, it looks like junk but it's my baby.

Update:
Got it to run with 960 on the iGPU stable by setting the cpu fan min to 87.5 (max)
FPS dropped to 10.8
Of a bigger concern was the pwr usage, Max was 137 (ok) but the potential pwr usage (both modules plus iGPU) was 150
The drop in FPS may be due to thermal throttling.
Since the weak spot is the 4 pin cpu connector is the weak spot I will forgo the cooler upgrade and just call 900 MHz the sweet spot: 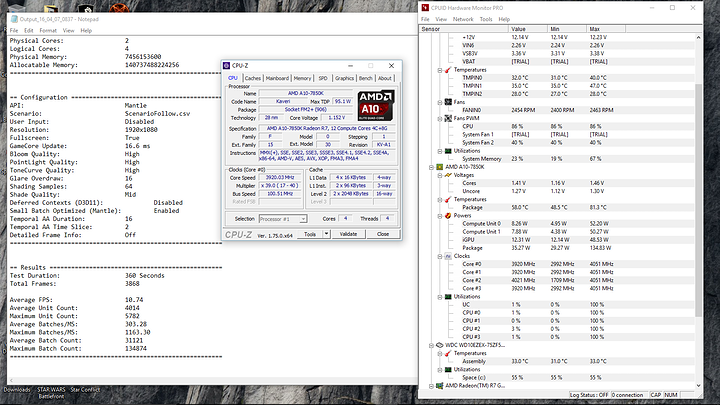 nothing to laugh about

I have a lot of respect for the 7850k and have built a few machines for friends around it, haven't had a complaint about it yet.

Here's some OC'd benchmarks with fast memory, it can almost keep up with the $100 GPUs

Introduction AMD’s Kaveri K Series APUs have a wealth of untapped performance potential: out of the box they come with a modest 720MHz GPU core clock speed, yet anyone who has toyed with AMD APUs in the past knows there’s going to be a lot of overcloc...

The problem with spending $120 on a MB is that I only spent $130 on my APU. Why would I turn around and spend almost that much on a MB? If I had that kind of money I would have spent more on my APU.

That would be the joke ya.

I'm still waiting for someone to get a golden chip, OC it to 5ghz/1ghz and run it with some 3000mhz RAM.

Thanks, I have 2133. The eteknix article was what convinced me to go this route.
Dau has the gigbyte 88 board, both combo's came from MC. I plan on OC'ing hers next and since she has duel gfx (XFX R7 250) maybe I can fill in some info sorely lacking in the eteknix article.
Main reason I posted this is there is almost no info for the 68 chipset boards

Thanks @Tex, another APU driver! Gave the 7870 to dau. Was shocked when I saw the CPU cooler how nice it was and how AMD did not advertise it.

My plans are to upgrade daus with a Polaris card. She has a new 380 watt PSU and I don't want to drop in a 200 watt 380 in it. Polaris should be half that. Then I will get her R7 250 which will work with this old monitor (1080 but no HDMI).
The PSU came with the Antec case and it was half price cause it has a scratch.

Here we are, these are just the mobile chips I think, they're pulling an intel C2D or something

Although AMD's upcoming socket AM4 heralds new lines of processors and APUs based on the company's next-generation "Zen" CPU micro-architecture, some of the first APUs will continue to be based the current "Excavator" architecture. The "Bristol Ridge"...

Here are some pics. Warning: I don't do cable management very well. The monitor is from an old emachines Walmart special. It's only 19" but fits on a snack table in the bedroom : 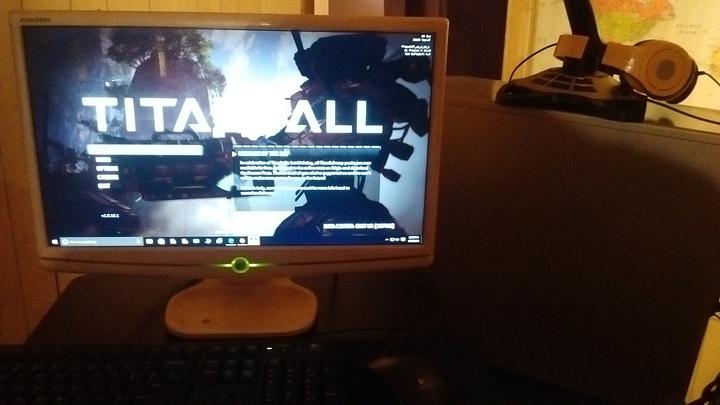 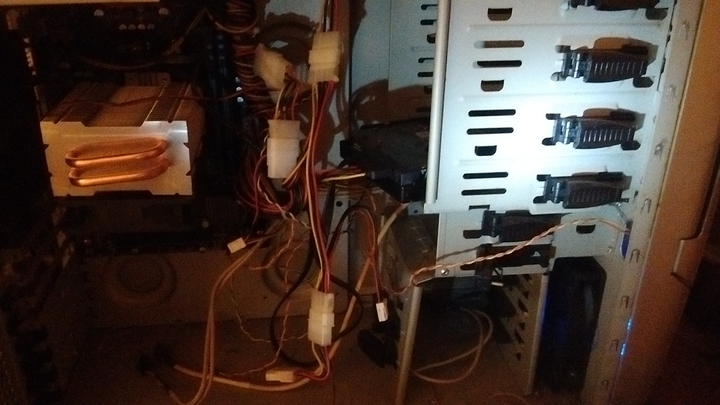 Putting some cooling on the chipset would certainly help, since these mobos come with awfully small chipset heat spreaders.

When I bench tested it I was surprised how hot it got. I thought of using an old cpu fan but I may replace the heatsink. I have an old ASUS board with some really good ones.